Giorgio Bassani: The Summer Before the Dark 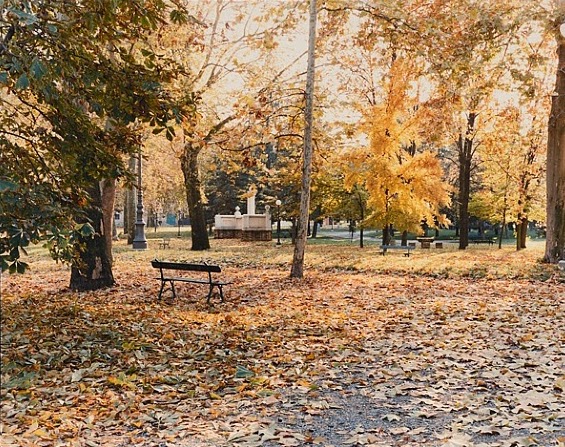 Walled-in by four walls forewarned
soon enough it grew
black luminous wide-rimmed
pointing decisively up toward the imminent
sky
full day
and night with grey
sparrows dusty blackbirds
unflaggingly scanned from below by pregnant
cats and by my
mother  -
she too confined defenceless behind
the windowsill forever brimming
with her crumbs.

Straight as a sword from its base to its tip
twenty-some years on
it overtops the neighboring roofs
beholding every bit of the city and the infinite
green space that circles it
but now somehow stumped I can guess
how it feels unsure
of a stretch up there in the heights a narrow space
in the sun
like someone at a loss
after a long long journey
as to which road to take or
what to do.
-The Racial Laws by Giorgio Bassani, translated from the Italian by Jamie McKendrick, 2007, from The FSG Book of Twentieth-Century Italian Poetry, edited by Geoffrey Brock, New York, Farrar, Straus, Giroux: 2012. 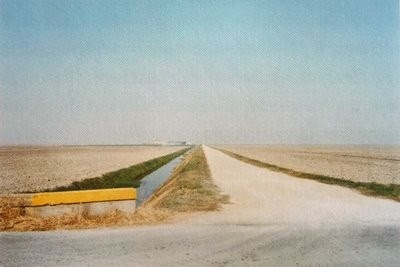 
The novels of Giorgio Bassani, known collectively as The Novel of Ferrara, are no exercise in  nostalgia for lost youth, although they chronicle the years of Bassani's adolescence in an enclave that no longer exists: the Jewish world of pre-war Ferrara.  In the same year that Christopher Columbus set sail from Spain, Duke Ercole I d'Este was welcoming Jews expelled from Spain to the city of Ferrrara.

Bassani grew up in a prosperous family during the 1930s, a time he later described as being fraught with an "ever-increasing sense of intimate laceration."   His backward glances would be viewed through the lens of the unimaginable fate that awaited European Jews.  Whether you read them collectively as Inside the Walls (1973), or in their individual volumes as The Gold-rmmed Spectacles (1958), The Garden of the Finiz-Continis (1962), Behind the Door (1964),  The Heron (1968) and  The Smell of Hay (1972), these novels form a history of Ferrara that is elegiac in tone, but not in substance, as they trace the growth of Italian fascism and anti-Semitism that confounded a community that had thought they were secure in the northern Italian city.

Bassani's prose has often been described as cinematic, even before Vittorio de Sica filmed The Garden of the Finiz-Continis in 1971. The film won an Oscar for Best Foreign Language Film and introduced Bassani the novelist to an international audience.  When de Sica changed an incident at the end of the film, Bassani was indignant: "it didn't happen like that."   The lush muted colors of the film mirror those of Bassani's young friend, the painter Giorgio Morandi, who he met while studying at the Uniersity of Bologna under the great art historian Roberto Longhi.
Although the Italian title of his collective work is Il Romanzo di Ferrara, Bassani was insistent on getting real life details right and it is mark of achievement that inter-was Ferrara exists on the map of modern consciousness. 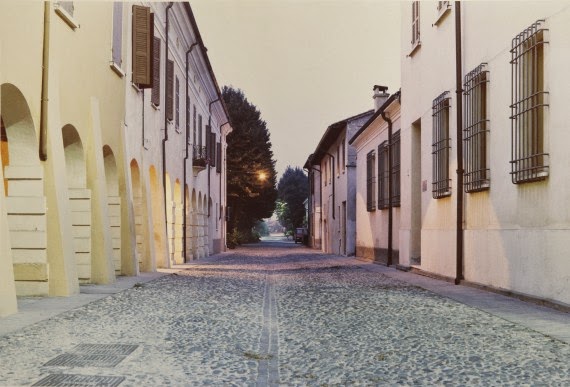 I. The garden where Micol and Alberto Finzi-Contini play tennis with their friends is their private garden of Eden will expel the moderator who is in love with Micol and, ultimately, the entire family.
For three generations, the Finzi-Continis have been the wealthiest Jewish family in Ferrara, living in a large walled compound that radiates the aura of the ancient Greek temenos, a refuge from the cares of daily life. Within its walls they maintain the routines and rituals that will sustain the family as catastrophe moves ever closer. As time passes, their self-imposed isolation increases; the family withdraws from services at the local synagogue, retreating to a tiny Spanish synagogue that has gone unused for centuries.  One neighbor, at a loss to understand them, charges that the Finzi-Continis are guilty of an “aristocratic-type anti-Semitism.”
Micol and Alberto, the children, have been tutored at home, appearing at the state school in an antique carriage to attend examinations, speaking in aristocratic accents.  There, they attract the attentive eye of Giorgio, a middle class Jewish boy.  He develops a crush on Micol, a girl whose smile hints at a shared sensibility.  To Giorgio, their charmed existence is a source of wonder, carried out with good humor in a Gothic  mansion, attended by a monumental mausoleum of their dead ancestors.
In October 1938, two months after  the first racial laws were imposed,  Jews were forced to resign from  Eleonora d’Este, the private  tennis club, when the  team of a Gentile woman and a Jewish man almost win the doubles championship.  Alberto and Micol, now in their early twenties, invite the ostracized  members to play on their private  courts. The park within the walls becomes a sylvan refuge for Giorgio and his friends.  In the coming months, new laws will forbid Jews from marrying Gentiles and from employing Gentiles as servants.

Still,  Giorgio's father assures him that the Finzi-Continis will be safe, that Mussolini is not so evil as Hitler.  The father is a member of the Fascist party (the Italian party allowed Jews to become members, so he had some reason to be optimistic).    Alberto's studies  are cut short by his deteriorating health but the Emily Dickinson-loving Micol will pursue her thesis in Venice until Jews are banned from the university.  Her restless temperament finds no adequate outlet in confinement at home and she quarrels with Giorgio, finally banishing him.  Along with about a third of Ferrara's Jewish population, the Finiz-Cotinis will be deported to a concentration camp in 1943, twenty-three years after the first of the new anti-Semitic law was passed in Hungary in 1920.


“...I suddenly felt myself filled with great sweetness, with peace and tender gratitude.   The setting sun, piercing a dark bank of clouds low on the horizon, lit everything vividly: the Jewish cemetery at my feet, the apse and campanille of the church of St. Christopher a little farther away, and in the distance, high above the dark extent of houses, the distant bulk of the castle and the cathedral.   All I needed was to find the motherly face of my city unchanged, to have it all to myself once more, for the agonizing sense of exclusion that had tormented me in the last few days to fall away at once.  The future of persecution and massacre that might await us (since I was a child I had continually heard of it as an eventuality that was always possible for us Jews) no longer frightened me.”
- excerpt from The Gold-Rimmed Spectacles by Giorgio Bassani, translated from the Italian by Isalbel Quigley, New York, Atheneum: 1960.

II. The late W. G. Sebald named The Gold-rimmed Spectacles  as one of his favorite books. It tells the story of Dr.Athos Fadigati,an honored member of bourgeois society whose  glasses are the material expression of his aesthetic sense, and a "uniform of respectability.”  But when his homosexuality is discovered, first by young male students, one of whom has a summer affair with the doctor, and then by the larger community.  Fadigati's position cannot protect him from  ostracism and eventually he commits suicide after two men deep in conversation in the middle of the night, express their contempt for him by urinating against a wall.


Our narrator, one of those young men, recalls how "little by little, without meaning to, all of us began to show him scant respect.”  Then, on All Souls' Night, as he is leaving a brothel, he hears a voice he recognizes in the darkness. it is Doctor Fadigati and he is talking to a dog.  Walking by the canal, Fadigati had stooped to pet the stray and she has followed him on his way.  A group of fascist toughs comes out of the brothel and, seeinggainst a wall.  In the safety that darkness provides, Dr. Fadigati admits that he is now completely alone since his public rejection by his young lover: the hospital has dismissed him, few patients come to his office, and he can see no way out but to move away.

The denouement is rich in allusion discreetly  drawn.  Dr. Fadigati drowns himself in the canal rather than attempt the difficult task of becoming a refugee. Bassani gently instructs us in the parallels between the exclusion of the Jews and the persecution of homosexuals, turning a personal downfall into a powerful metaphor for the slide into fascism.  We are left to wonder about the fate of the (Jewish) narrator, whose Christian friend Nino has assured him, "Oh, we Italians are much too light-hearted.  We may imitate something about the Germans, even the goose-step, but not their tragic sense of life." 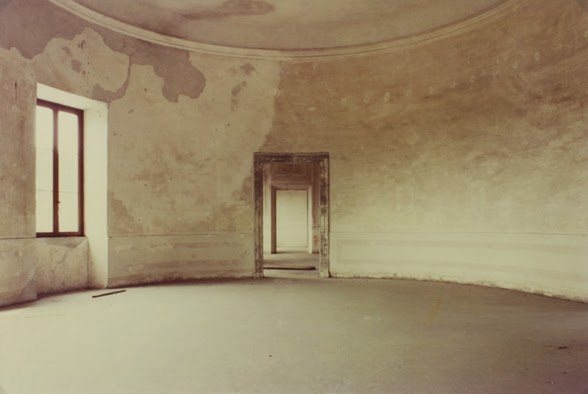 Giorgio Bassani was born in Bologna but grew up in nearby Ferrara. In 1935 he enrolled at the University of Bologna to study literature, commuting back and forth by train. Despite the racial laws of 1938 banning Jews from universities, Bassani graduated in 1939 and then taught  history to Jewish students who had been expelled fromthe public schools. He was forced to publish his first novel (A City on a Plain, 1940),  using a pseudonym - Giacomo Marchi.  Thanks to his anti-Fascist activities, Bassani was imprisoned for three months in 1943,  After his release, he married his sweetheart Valeria Sinigallia. They were forced to leave  Ferrara and go into hiding, first in Florence and then moving on to  Rome.  After the war ended he became the editor of the literary journal Bottega Oscura.  As the editorial director of  Feltrinelli, Bassani  published  Giuseppe Tomasi di Lampedusa's masterpiece The Leopard when other Italian publishers had refused it.