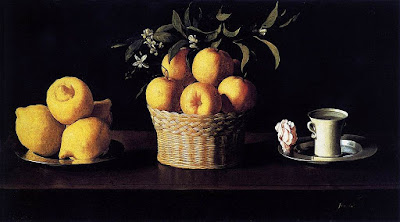 If only Francisco de Zurbaran had had a century of his own to shine in. Instead Zurbaran's life (1598-1664) overlapped that of Diego Velasquez (1599-1660), arguably the greatest painter of Spain's Golden Age.  Whether Zurbaran would have been flattered to be called the "Spanish Caravaggio" is open to question.  There is no evidence that he ever saw any of  the Italian's work, not to mention that the comparison  grounded in their similar intense use of chiaroscuro, went in the wrong direction for an unalloyed compliment.  And Zurbaran might well have taken offence; he was an ambitious man, the son of a notions seller,  who married three times to wealthy women.

Still life in the 17th century was just becoming a separate genre rather than a merely decorative addition to portraiture.  Looked down on, seen as requiring less skill and ambition than figure painting, it was the poor stepchild of painting.  Zurbaran was a typical artist of his time, painting mostly religious subjects, long  used  to educate the faithful and a fruitful source of commissions for Zurbaran.  Portraits were intended to flatter the vanity of their subjects; a clever artists could combine the two as Zurbaran did with Bishop Gonzallo de Illescas.   Of the few still life paintings that are thought to be from his hand, only this one is signed 'Zurbaran and  dated 1633.

One painter, Francisco Pachecco, threw shade on still life  in The Art of Painting (El arte de la pintura) in 1649):  "These days there is no lack of those who enjoy this kind of painting because it is easy to do and causes delight by its variety."  "...although it does require more skill...if it is to be used in serious history painting."

Looked at in one way Still Life with Lemons, Oranges and a Rose  is a triptych. This has led some critics to guess at religious symbolism in the objects themselves. The unearthly light  does not reach  the  preternaturally dark background, sometimes referred to as Spanish-black. The objects are set on a narrow ledge which imparts a horizontal solemnity to their arrangement.   A  basket of oranges with a sprig of blossoms looks freshly plucked from the tree, an orangerie being a sure sign of luxury in the days before refrigeration. So was the pewter plate that holds four lemons, their pedicels all projecting an erotic tactility.  The cup of water with a rose on a pewter saucer may be included as a bravura display of chiaroscuro.  If we cannot know for certain what prompted Zurbaran to paint this enigmatic masterpiece we sense his pride in its perfection.
Image:
Francisco de Zurbaran - Still Life with Lemons, Oranges and a Rose, 1633, oil on canvas, 23.62 x 41.12" The Norton Simon Museum, Pasadena.
Posted by Jane Librizzi at 3:25 PM

I first started lecturing in European art history in 1991, specialising in the 17th and early 18th centuries. But although Spanish art from that era was very popular, no one had ever mentioned Zurbaran to me. Then in 1993 in an MIRC channel that had absolutely nothing to do with art history, I saw the nick Zurbaran for the first time and was referred to the best art history references!!

The Zurbarans at Auckland Castle (and other places) still make my heart beat loudly.

Hels, Zurbaran's reputation didn't so much go down after his death but more like disappeared off the radar. The Metropolitan Museum in NYC didn't even have a Zurbaran show until 1987. So I'm not surprised to hear that art histories took awhile to catch up.

An exceptional work! I love and I saw this cup with a rose at an exhibition, I have a reproduction of it.

Tania, it is exceptionally beautiful. How fortunate that you could meet it in person. A friend of mine just remarked on this one, too.