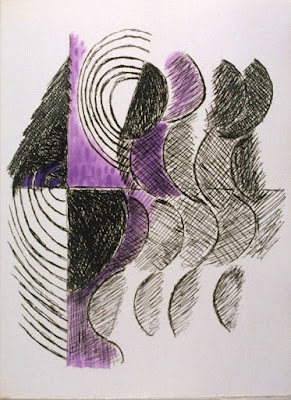 "Did the same
Car carry me away
I see where you came from
You turn your head
Midnight
On the moon
Just struck
At the street corner
Everything is turned around
I saw her face
Even her hands
The last star
Is in the garden
Just like the first
Think of tomorrow
Where will they be
The thoughtless dead
When the wall vanishes
The sky will fall."
"Perspective" by Pierre Reverdy (1889-1960), translated from the French by Kenneth Rexroth, New York, New Directions: 1969.

A wind rose is a graphic chart that shows the direction and speed of wind and employs colors to differentiate wind speeds.  The subject was irresistible to Sonia Delaunay, an artist who thought in graphic terms no matter what the medium at hand. When her friend the poet Tristan Tzara invited her to illustrate a series of poems he had written about La rose des vents Delaunay was delighted.    Both had a long-standing interest in illustrated books and had worked with others on similar projects, most famously Delaunay's  1913 collaboration with Blaise Cendrars on Prose of the Trans-Siberian Railway and of Little Jehanne of France a long title for a long work printed on one continuous sheet of paper two meters long.   The resulting book, titled Juste present (La rose des vents) was published in 1961. For the covers Delaunay created a color etching that appeared right-side-up on the front and upside-down on the back just present, indeed. 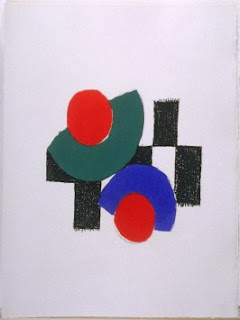 "I saw Eternity the other night,
Like a great ring of pure and endless light,
All calm, as it was bright;
And round beneath it, Time in hours, days, years,
Driv'n by the spheres
Like a vast shadow mov'd: in which the world
And all her train were hurl'd."
- excerpted from "The World" by Henry Vaughan (1621-1695), Maidstone, Crescent Moon: 2012.


It was jazz that came to mind when I saw the Sonia Delaunay retrospective at the Albright-Knox Gallery in early 1980. It was still winter and those brilliant colors seduced me;  fanciful rugs woven  rugs on the gallery floor seemed to bring the sun inside even on a gray day.

Along with  elation  I felt  the unfairness of being too late to an exhibition that opened less than two months after the artist died in December 1979.  If there was any incongruity between the brilliant rhythms in Delaunay's work and the unmovable gray marble columns holding up the Beaux Arts galleries it barely registered on me.  Originally built  to house the Fine Arts Pavilion for the 1901 World's Fair, the Albright-Knox Gallery only opened in 1905; it was celebrating its 75th anniversary in 1980. 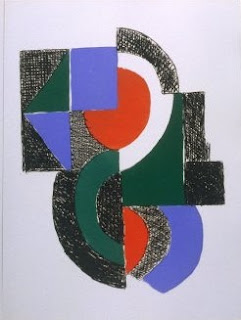 Simultanisme, or the representation of movement through pure color, was Sonia Delaunay's contribution to the dynamic experiments that ushered in 20th century art. It has proved to be just as important as Dada and Surrealism, two better-known European movements.  Delaunay's experiments went beyond the emphatically colored landscapes by the Fauvist painters (derogatorily christened  as " Les Fauves" or " the wild beasts" by contemporary critics) just as people were getting comfortable with the beautiful daubs of the Impressionists.

Delaunay and Tzara had known each since their early days in Paris, meeting in 1921.  Sonia Terk (1885-1979)  was born in Odessa and emigrated from Ukraine in 1905 to study art. When  she met Robert Delaunay, a French artist and became pregnant with their son,  she divorced her husband and married Delaunay.  Their marriage was also an artistic partnership that lasted until Robert Delaunay's death in 1941.   The Delaunay apartment became a meeting place for avant-garde artists and poets Andre Breton, Louis Aragon, and Jean Cocteau.  While Sonia was busy decorating a Surrealist bookstore Robert painted two portraits of their friend Tzara.  Delaunay not only painted, designed clothing, furniture, and other household items but also collaborated on books with several French poets.  "I have done everything. I have lived my Art," she said. 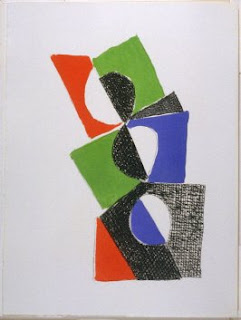 Tzara came from Hungary by way of Zurich which is where he began to practice something he called Dada, art that expressed hostility to reason and aesthetics, two things that had proved woefully inadequate in the face of trench warfare. A performance artist at the Zurich's Cafe Voltaire, he began to produce manifestos before he wrote poetry.   By the time he met Sonia Delaunay-Terek, Tzara was already known as the "president of Dada."

I paid particular focus on Sonia's work because she became the first living female artist to be given a retros­pective at the Louvre... in 1964. How extraordinary that all those talented women before her never saw their own work in the Louvre!

You rightly note that Delaunay's experiments went beyond the brightly coloured landscapes by the Fauvist painters, but I think Fauvist art should have continued beyond that tiny Edwardian era.

Thanks for the link
Hels
https://melbourneblogger.blogspot.com/2015/09/sonia-delaunay-in-paris-art-colours-and.html

Hels,apparently Fauve artists were shaken and disheartened by WWI; I think of Andre Derain whose colors became darker.
Delaunay was known to put husband Robert's work forward because she sensed he had less confidence than she did. We are no longer bound to do that!

Finally I come back here, Jane. Summer calls us out. I love these color rhythms of Sonia Delaunay.

Tania, it takes a colorful artist for a colorful season.
Here in New York State we are having a heat wave.