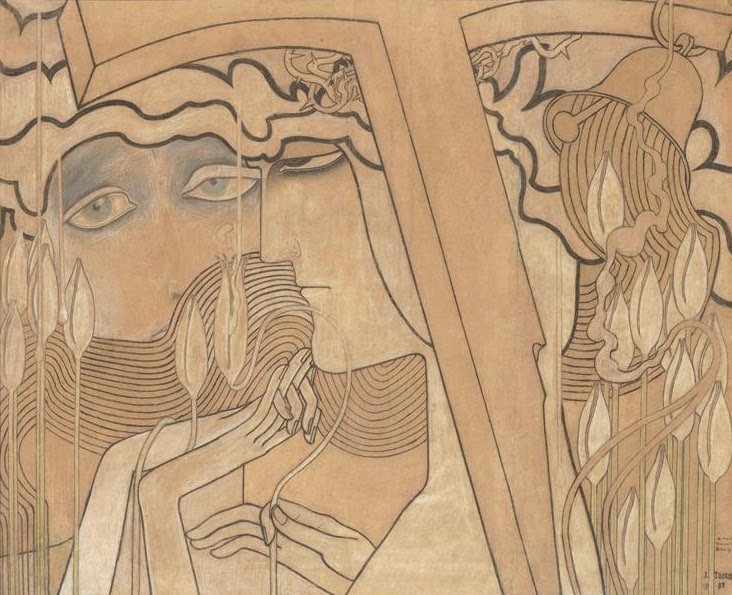 “My swirling wants.   Your frozen lips.”
. -  excerpt from A Valediction Forbidding Mourning by Adrienne Rich, from The Will To Change , New York, W.W. Norton: 1971

If you write only three novels it is well to make all of them masterpieces.   Let no feeling or experience go to waste..  That’s how it was for Henry Handel Richardson (1870-1946), the author of Maurice Guest (1908), The Getting of Wisdom (1910) and the trilogy known collectively as The Fortunes of Richard Mahony (1917 - 1930).  Richardson's first novel was Maurice Guest, a study of erotic obsession and the nature of art.  In retrospect, its publication in 1908 was not well-timed. The English-speaking world’s admiration for the genius of German music and the cachet of attending a German univerisy were about to be obliterated  by two world wars. Reprinted in the series of Virago Modern Classics in 1981,. and again forgotten but still, one of the great novels of the 20th century.

Leipzig in the 1890s was to musicians what Paris was to visual artists. The new Leipzig Gewandhaus was.the crown jewel of  the city's conservatory system.  Daily life for a music student might be a grinding round of  lessons and  practicing, home a shabby rented room, the food overcooked boarding house food, but the history!  J.S. Bach was buried in the Thomaskircke where he had once been cantor, and in recent decades the Mendelssohn siblings, Felix and Fanny . young composer-prodigies., and the married couple ofRobert and Clara Schumann had lived and worked there. Richard Wagner, had been born in Leipzig and the cult of the composer had elevated him to something close to a deity.
Into this febrile atmosphere comes Maurice Guest, a provincial Englishman  who has abandoned his career as a teacher to study music, with support from his skeptical  parents.  The contrast with his childhood home, "one of those cheerless, middle class homes across which never passes a breath of the great gladness, the ideal beauty of life: where thought never swings itself above the material interests of the day gone,the day to come, and existence grows as timid and trivial as the petty griefs that intersperse it"
Among the Germans, British, and  Americans, each one hoping to experience the alchemy that transforms talent into greatness,  is  one Australian, Louise Dufrayer.  When Maurice sees Louise at a music lesson, she seesm the embodiment of everything exotic and bohemian that has been lacking in his life.  He is immediately besotted and, as loses touch with the inner core of his being.  And although Maurice gradually realizes the smallness of his musical talent in comparison to his dreams, his emotional intelligence is often acute and its loss as erotic obsession overtakes him is a tragedy.  Of his relationship with an American girl, he thought " “Johanna had not touched him deeply;she had left him as cool as he had no doubt left her; neither had found the key to the other.”  Further, about Johanna's relationship with her sister Ephie Cayhill, one of Maurice's classmates, he comes to realize  her attitude “had a touch of the masculine about it: it had existed only as long as it could guide and subordinate;it denied its object any midget attempt at individual life; it set up lofty moral standards, and was implacable when a smaller, frailer being found it impossible to live up to them." 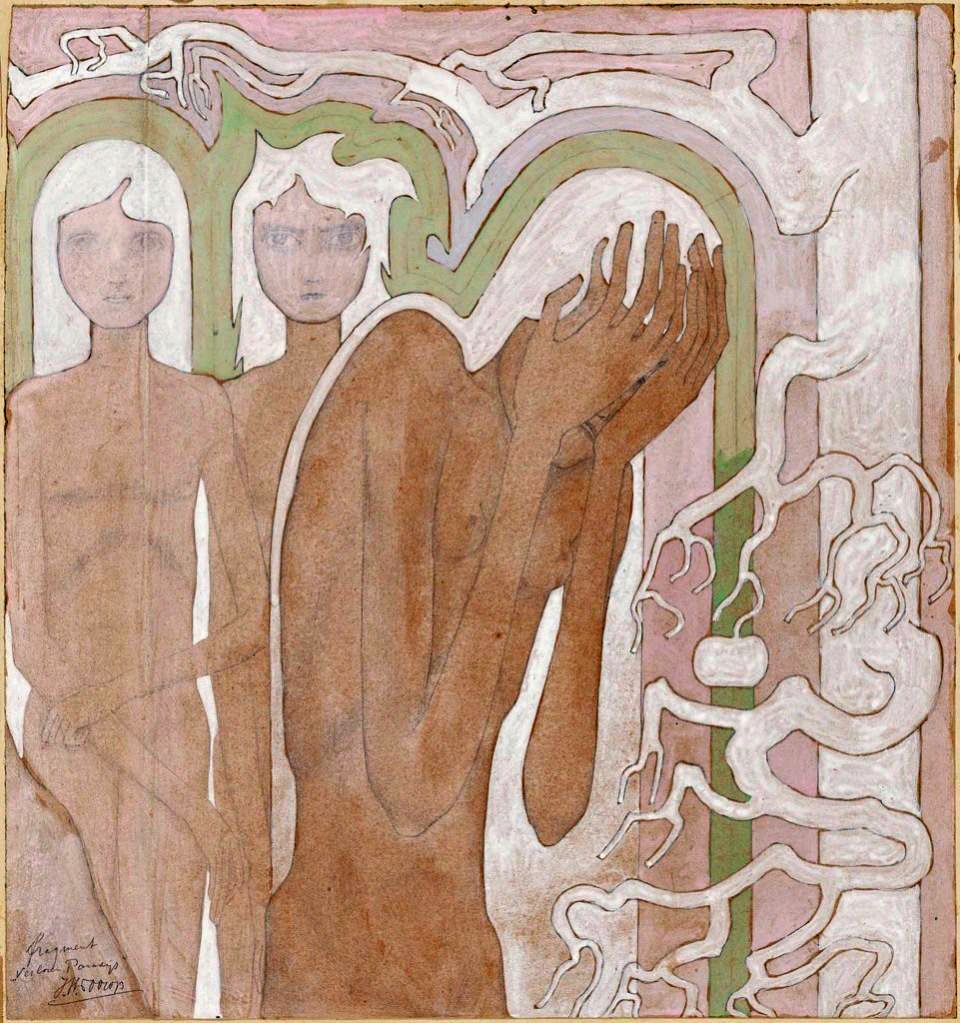 One of the pleasures of reading Muurice Guest is that all the characters are richly drawn as Maurice. An aspect of Richardon's greatness is her ability to portray emotional intelligence in her characters convincingly, not just as an authorial attribute.   When we meet Louise Dufrayer, she is in love with the composer/pianist Schlisky, a man convinced of his own greatness but with a weakness for erotic dalliance.  When he abandons Louise for an American heiress, she turns to Maurice in a moment of despair, an action she comes to revil and, sadly, Maurice with it.   “She had gone into this intimacy deliberately, with open eyes, knowing that she cared for him only in a friendly way.  She had believed, then, that that the gift of herself would mean little to her, while it would secure her a friend and companion.  And then, too -  she might as well be quite honest with herself – she had cherished a romantic hope that a love that commenced as did this shy, adoring tenderness, would give her something finer and more enduring than she had hitherto known.  Wrong, all wrong from beginning to end!  It had been no better than those loves which made no secret of their aim and did not strut about draped in false sentiment.” (p. 452)  During one of their harrowing confrontations, in reply to Louise, Maurice says, “How can you say that?  - And yet I think I know what you mean.  It's like a kind of rage that comes over one – Yes, I've felt it too.” (p. 409).

Maurice Guest has been compared to Stendhal’s Sentimental Education and Flaubert's Madame Bovary. As a naturalist novel it is a great one; Antonia White thought it was and urged it on other writers, and Doris Lessing did as well.  Although Richardson writes in the sometimes veiled terms required by convention in her time, she portrayed the varieties of sexual love, homosexuality, troilism, sadism,  intense female bonding  the love of  a woman for  a homosexual man., things a middle class woman was not supposed to know about, much less comprehend.  But Richardson was one of the tribe of humans who say courageously. “Nothing human is alien to me.” 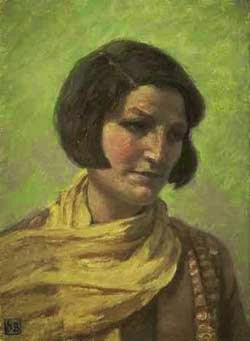 Henry Handel Richardson was the pen name of the Australian novelist Ethel Florence Lindesay Richardson.  She chose the name of an Irish male restive as her pen name for the usual reasons, and  for decades, Henry Handel Richardson was assumed to be a man. The British writer Iris Murdoch was a distant relative.
Richardson was born at Melbourne in 1870.  Her father was a recent immigrant from Edinburgh where he had trained as a doctor, but he had come to Australia to make his fortune in the gold mines of Victoria, which he did, allowing him to become a prominent figure in Melbourne society. But,as Richardson in her masterful trilogy The Fortunes of Richard Mahony, that success was to be short-lived.  In 1878, when Ethel was eight years old, Walter Lindesay Ruchardson began to exhibit  the early signs of cerebral syphilis, likely caught on the shipboard journey from Scotland, and he died four years later, having gone through interests in philosophy to astrology and spiritualism, to end in insanity.
Mary Richardson was left destitute and become a rural postmistress.  Six decades later when Henry Handel Richardson published the memoir Myself When Young, she could write, “I can't say we grieved over his death.”  But her father's life and the bush towns she grew up in became the inspiration for Richardson’s novels. She had a younger sister, , and both girls were lively and also precocious musicians. Ettie, as she was then called, composed songs and cantatas and was generally agreed to be a brilliant student.  When the girl reached 18, her mother resigned her post in order that she might take girls to Europe, so that Ethel might become a concert pianist.
Between 1889 and 1892, Ethel Richardson studied  music in Leipzig, abandoning that career because the required public recitals  traumatized her, in a way that she had been unprepared for.   Richard came to understand human psychology through the new work then being published by Krafft-Ebing and Freud and through the plays of Ibsen and Strindberg.
To place Richardson's writing  - and especially her debut with Maurice Guest - in a way that highlights its radical departure from conventional fiction, ….Her English-language peers lagged behind her.  D.H. Lawrence's notorious novels Sons And Lovers (1930, Women In Love (1920) and Lady Chatterly's Lover (1928) were still well in the future and as for James Joyce, the only thing he had published was a book of poems, Chamber Music in 1907.  I do not want to  reinterpet literature through hindsight but it is hindsight that has enabled critics to elide Richardson's revolutionary story-telling by ignoring her originality.  Her truest peers were among the Scandinavians.  Cora Sandel.  Two of August Strindberg's plays are worth considering.  In Miss Julie (188), he....and in The Ghost Sonata (1907) a naïve but artistically-inclined student is bedazzled by the glamor of bohemian student life.
Her second novel,  The Getting of Wisdom, (1910) was set in a Melbourne boarding school for girls.  Unlike other well-known novels about adolescence like Jean Webster’s Daddy-Long-Legs (1912), Richardson's girls are boisterous, they have  crushes on older men,  and in  her portrait of  a schoolgirl's first passion and emotional devastation Richardson was a writer of painful emotional honesty   Richardson returned to Australia only once in 1912, when she had already published two novels.    While in Leipzig she had met her future husband, a Scottish student of German literature, who later became a professor at London University.   In 1932, the American Sinclair Lewis, the recipeint in 1930 of the Nobel Prize for Literature nominated Richardson for the Prize.  She died at age 76 in 1936.

In year 12, last year of high school, every student has to critically read a couple of novels taken from a short list. One of them in Melbourne always had to be Henry Handel Richardson's The Getting of Wisdom which I loved.

What I did not know was that Ethel Richardson studied music in Leipzig, abandoning that career because the scary public recitals. It was have been appropriate, I think, to know how Richard came to understand human psychology through the new work then being published of Freud and through the plays of Ibsen and Strindberg. But hey.. I was finishing school in 1965.

Hels, lucky you! It wasn't until I saw the movie The Getting of Wisdom that I even knew Richardson existed.
After reading Maurice Guest in the Virago edition of the 1980s, it wasn't until 2004 that I found Michael Ackland's biography (Henry Handel Richardson: A Life, Cambridge University Press). It's so unfair that we have to wait so long to learn about women.