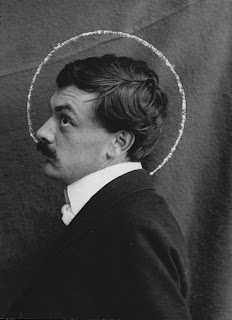 “Of the artists who founded the Vienna Secession, Kolo Moser was unabashedly the boldest and one of those who caused Viennese philistines the most trouble in the early days of the Secession.  Wherever there was something to reform in Viennese arts and crafts – and where wasn’t that needed? – you could find Kolo Moser working away with persistence intrepidness,  taste, and astounding technical skill.” – Deutsche Kunst und Dekoration XXIII, 1913-14, translated from the German by Gabriele Fahr-Becker.

“We wish to establish intimate contact between public, designer and craftsman, and to produce good, simple domestic requisites. We start from the purpose in hand, usefulness is our first requirement, and our strength has to lie in good proportions and materials well handled . . . The work of the art craftsman is to be measured by the same yardstick as that of the painter and the sculptor . .  So long as our cities, our houses, our rooms, our furniture, our effects, our clothes and our jewelry, so long as our language and feelings fail to reflect the spirit of our times in a plain, simple and beautiful way, we shall be infinitely behind our ancestors.” - Koloman Moser & Josef Hoffmann,  1905. 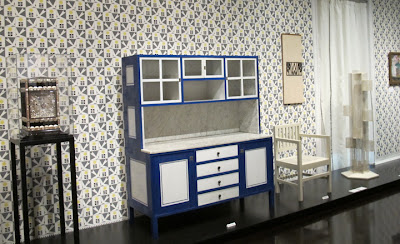 When the Neue Galerie opened a decade ago in New York City, it seemed that the museum might offer an alternative to the dominant  art historical narrative of modernism as told by the Museum of Modern Art. The art dealer Serge Sabarsky and his friend, collector Ronald Lauder, were well prepared to take on the ghost of  Alfred Barr,   MOMA's first director and a confirmed Francophile.  What followed was  a series of firsts in North America, exhibitions devoted to Josef Hoffmann's Interiors (2006), the drawings of Alfred Kubin (2009), and the paintings of Otto Dix (2010),

Koloman Moser (1868-1918) was one of the founders of the Vienna Secession in 1897, along with the painter Gustav Klimt and the architect Josef Hoffmann.   Today Moser's name is less familiar than theirs but, with Koloman Moser: Designing Modern Vienna 1897-1907, on view at the Neue Galerie from May 23 to September 2, 2013, that will change, along with the idea that Hoffmann was the group's dominant creative force.

Moser, who began his career as an illustrator, was the obvious choice to design the Secession's journal Ver Sacrum (Sacred Spring).  Published for only five years in an unusual large square format, it is a touchstone among magazines.
Members of the Secession were united by their iconoclasm, not by a common style. As early as 1904, the journalist Bertha Zuckerkandl writing in Deutsche Kunst und Dekoration,  noted Moser moving away from the curvilinear Art Nouveau style to a new idiom of lines and geometric shapes, one more suited to incorporating interior design into architecture.  She also identified Moser as the group's leader in developing a new vocabulary of forms. What his contemporaries discerned, historians have overlooked.  Five years before  Gustav Klimt "discovered" the gold painted  mosaics  at Ravenna, Moser had used both in his design for the large planters that bracket the main entrance to the Secession Building in Vienna.  It was Moser who designed the  iconic black and white checkerboard chairs for Hoffmann's Purkersdorf Sanitorium.  Subtract Moser's contributions and influence to the book of 20th century design and it would be thin indeed. Creators of upscale crafts today, such as Mackenzie-Childs,  have mined the designs of  Moser, Hoffmann, and particularly the pastiche style of Dagogbert Peche. 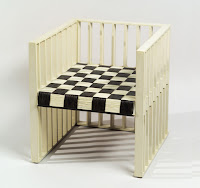 With financial assistance from the  banker Fritz Warndorfer, Moser and Hoffmann founded the Wiener Werkstatte in 1903 to bring the Secession's vision of the total artwork or Gesamtkunstwerk to production. They shared a belief that social ills could be cured  by  example  and that good design was a harbinger of social progress.  We may regard their ideas as naive but  their decorative discipline achieved incomparable results, albeit exorbitantly expensive ones.  The way was prepared by Moser's 1902 interior design for the physician Dr. Hans Eisiler von Terramare and his wife Gerta Loew (who sat for her portrait by Klimt). The wallpaper used for the current exhibition was originally  designed by Moser for the master bedroom at Villa Terramare. 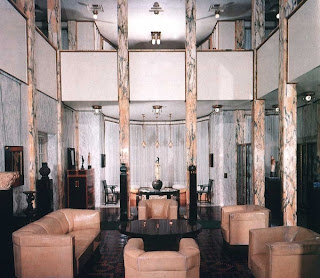 As it turned out, the Werkstatte's masterpiece of total design was created not  in Vienna but in Brussels.  The Palais Stoclet, which took six years to complete (1905-11,) is the closest the Werkstatte  ever came realizing the ideal put forth by Peter Berhens: a feast of life and art.  Adolphe Stoclet, a wealthy banker and his wife Suzanne Stevens Stoclet, daughter of a Parisian art dealer, were living in Vienna when they happened to meet the painter Carl Moll  in his garden.    The Stoclets were so taken with Moll's villa that they commissioned its architect, Josef Hoffmann, to design a house for them when they returned to Brussels.

When the Palais Stoclet was completed, Josef Hoffman exulted that "this is only the beginning."   But there had been casualties along the way.  Moser  resigned from the Werkstatte in 1908.  Mismanagement of the group's finances and demanding clients had taken their toll.   Moser's final  decade was filled with painting,  theatrical productions, and postage stamp designs, a variety that points to his nickname of  tausendkunstler, the thousand-artist.


Although the Wiener Werkstatte continued to operate until 1932, the year 1918 marked an end.   Klimt died in June of pneumonia after suffering a stroke at age forty-nine.  Moser died  in October from cancer of the larynx; he was fifty.  Ditha Moser (1883-1969) survived her husband by fifty-one years.  Josef Hoffmann died in 1956 at the age of eight-five. 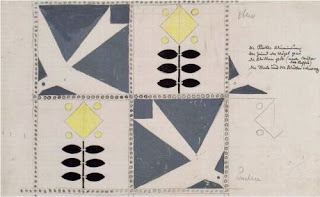 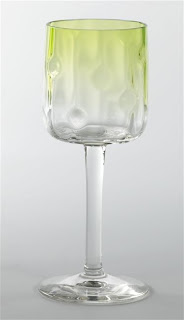 Lovely to see a post on their work- I am particularly taken by the designs of Dagobert Pesche.

Thank you, Dijanne. Thanks to the exhibition in New York City, there should be many more articles now. I published a piece here on Dagaobert Peche on November 27, 2009 that may interest you.

Thanks for post and Moser & Hoffmann citation. To visit a day Palais Stoclet is a dream for all in Brussels, but it's private access only - hélas !
I often pass in front of Palais Stoclet (avenue de Tervueren) but saw more in 2006 at Bozar : pieces of Wiener Werkstätte and a film (black and white) with interiors.
http://www.bozar.be/activity.php?id=5634&
Have a good day, Jane.

So great to see a piece on Kolomon Moser and such a range of beautiful pieces of work. Thanks!

John, with the exception of the image from the exhibition itself, I tried to find other examples of Moser's works as there are fine articles out there on the artworks in the show.
In a book I read recently, the author called Moser just another second rate artist. If I had known about "Designing Modern Vienna" then I'd have made a note. Obviously wrong!

Tania, thank you for the information. You are lucky to be able to see the outside, at least!

Oh, 'second rate artist' seems a little harsh, especially considering the influence he had, along with Hoffmann. Still, everyone can express an opinion, whether everyone agrees is another matter :)

Harsh, and also pointless, as the author wasn't even talking about Moser's circle to begin with, just Austrians.

Very odd, perhaps there are some personal issues there. Does make me wonder when I might come across a good biography of Moser, that might well be worth a read.

John, biographies per see - there are none that I've found in English. I'm looking forward to Christian Witt-Dorring's catalog of the current exhibition (Prestel). What I have read are books about Mosers and the group's work.
"Koloman Moser: Master Of Viennese Modernism" by Maria Rennhofer (Thames & Hudson)
and "Koloman Moser, 1868-1918" by Rudof Leopold of the Leopold Museum Prestel).
I thinkt there's a lot we don't know about Moser.

I think that's the problem isn't it, too few books about German/Austrian decorative arts in English. If I could read German fluently there wouldn't be a problem. Never mind, still so many other things to learn and enjoy :)

John, it's not just German/Austrian subjects. The only full-length book I could find about the Italian photographer Wanda Wulz is in German!

For people who are anywhere near New York City, the bookstore at the Neue Galerie has a large and outstanding collection on German and Austrian arts, literature, and history - in English and German.