Hammershoi's Many Shades of White 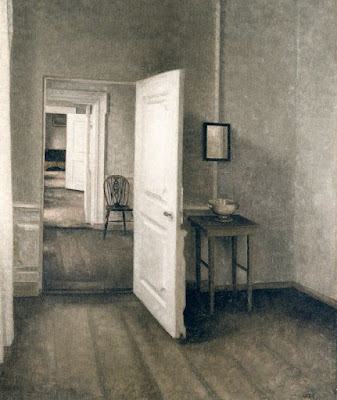 - excerpt from "Being Danish" by Kaj Munck (1898-1944) from A Second Book of Danish Verse, translated by Charles Wharton Stork, Freeport, NY, Books for Libraries Press: 1968.


The cliche of the melancholy Danish temperament hovers over the enigma that is the art of Vilhelm Hammershoi (1864-1916);  his work has been compared to Shakespeare's Hamlet or a setting for an Ingmar Bergman movie.  And yet it stands out in company with other art of  Danish Golden Age (approximately 1830-1870), work that can be as bright and boundless as the preternaturally blue summer nights of the north.  Hammershoi stood apart from other artists of his day;  he chose to paint portraits only of people he knew and his palette was one of tones rather than colors. 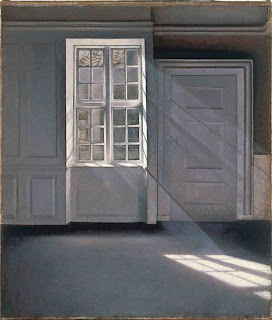 Was his art cold and repressed or tranquil and intimate?  I incline to the latter interpretation but understand the impulse to try to wrest from these paintings stories, whether made-up or drawn from the artist's own life,  that justify our strong responses.  Surely, there must be much ado about something.

Photographs, on the other hand, provide evidence of the accouterments of everyday life in the Hammershoi home:  paintings hang on the walls, curtains flutter at the windows, and china is laid out on the table.  The Hammershois possessed some aesthetically pleasing furniture, a white Hepplewhite chair gracing several paintings.

Ida Ilsted wrote to a friends that Hammershoi "had always wanted to live" in the apartment at 30 Strandgade after the couple moved there in 1898.  A large apartment dating to the 17th century that connected two buildings in the old Christianhavn section of Copenhagen, 30 Strandgade comprised a series od connecting rooms that had the air of a gallery intended for art or as art itself in Hammershoi's pairings.  Hammershoi himself wrote in a letter "Personally I am fond of the old, of old houses, old furniture, of that quite special mood that these things possess."  No surprise then that Hammershoi was attracted to archaic Greek sculpture that he painted in the museums of Paris and Rome that the couple saw on their honeymoon tour.

Hammershoi was fortunate in being supported by wealthy patrons who eagerly snatched up his domestic interiors and his scenes of old Christianhavn.  Carl Jacobsen was a brewer whose family business underwrote the establishment of the Ny Carlsberg Glyptotek to house the family collections, and tobacco manufacturer Heinrich Hirschsprung donated his collection to the state which built it a museum in Copenhagen finished in 1911.  Ironically perhaps, Hammershoi, a smoker, died of throat cancer five years later. 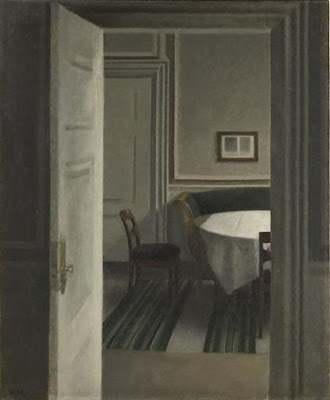 I wish I could remember
whether I've done anything

- "Father - Son" from Light by Inger Christensen from Light (1962), translated from the Danish by Susanna Nied, New York, New Directions: 2011

Very beautiful! I know this artist only by reproductions, but his intimist universe pleases me a lot, and the special light.

Tania, I've often wondered who moved the furniture. Furniture in the 18th century was usually quite heavy and the Hammershois' furniture looks even bigger in photographs than it does in the paintings. A puzzle - but a lovely one.