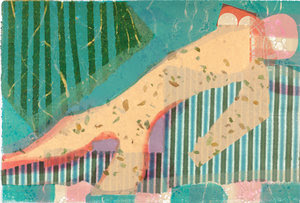 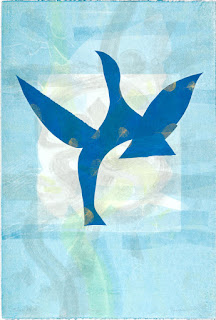 I can imagine Pierre Reverdy's poem as a dual portrait of two artists, the ingenue Francoise Gilot and the satyr Pablo Picasso.

A mixture of figuration and abstraction has always been characteristic of Francoise Gilot's work. Squares and stripes provide a geometric frame of reference, anchoring her subjects in an otherwise indeterminate space. Flecks on the wings of a bluebird or on the torso of a nude person suggest layers of time and space in the lives of living creatures, and the artist's interests in myth and the nature of the cosmos.
Gilot began making monotypes in 1985 after more than four decades painting with oils on canvas.  The new medium offered ways to incorporate texture into the meaning of the work.   She worked first at Solo Press in New York City where she created several series of  monoprints, so-called for their singular nature.  Painting directly onto plexiglass rather than using the customary stone or metal plates, Gilot was free to affix exotic papers to the base sheet.   From this plate a single print was made by transfer to paper.  The first exhibition of her monoprints took place in Paris at Berggruen & Cie in 1990.  Today, at ninety-seven, Gilot still practices her discipline of painting every day in her apartment on New York's Upper West Side or in her Parisian studio 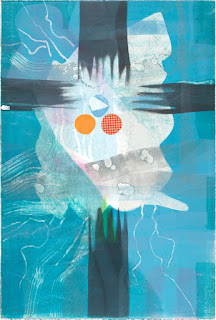 When Francoise Gilot met Pablo Picasso in 1943 it happened shortly after her first exhibition opened.  Attracted to the artist as much as the man, Gilot anticipated a creative partnership as well as a romantic one but, during the decade they were together, her interests were subject to his domineering personality and irrational outbursts. With strength and clarity of mind, qualities Picasso was not accustomed to in his relationships with women, she spoke the truth to him: "As an artist you maybe extraordinary, but morally speaking you're worthless."  Could Gilot have been thinking of that moment when she created Law And Freedom?

The year that Gilot moved in with him, Picasso made a drawing,  titled Adam Forcing Eve to Eat an Apple. The game of their courtship had turned to erogenous combat. In retrospect, Gilot had been wise to hesitate for the better part of three years before moving in with him. They had two children, Claude and Paloma, before their acrimonious split.  Picasso was so incensed that he cursed her, telling her that for the rest of er life she would live in his shadow, that if anyone was nice to her it would only be because of her connection to him.   She later described the source of her determination, "in a way I thought, I don't know how long we will all remain alive, so I'm going to do what I want." 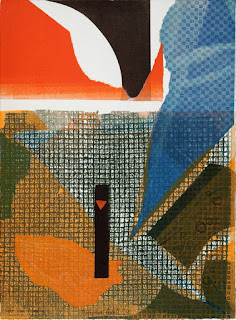 Pierre Reverdy (1889-1960) was the contemporary of Cubist and Surrealist artists but he was much closer to the Cubists, especially Joan Gris who illustrated some of Reverdy's books.  In Reverdy's later years, both Picasso and Braque  contributed illustrations to his books but Picasso was so jealous and competitive with Braque by that time that it must have been a relief to deal with Gris. Reverdy's  translator Kenneth Koch goes so far as to label Reverdy a "Cubist poet."   Reverdy was the least mystical of poets; his approach was  to transform life into an aesthetic experience.  Gilot writes about meeting Reverdy in her autobiography Life with Picasso, reprinted this year by New York Review Books, with a forward by Gilot's American friend author Lisa Alther on the anniversary of its initial publication in 1964.  Controversial when it was originally published in 1964, it caused friends of Picasso to vengeful denunciations; thanks to its publication, Picasso never again would conssent to see his children.

Fore more about Francoise Gilot, read Portrait Of The Artist As A Young Woman.