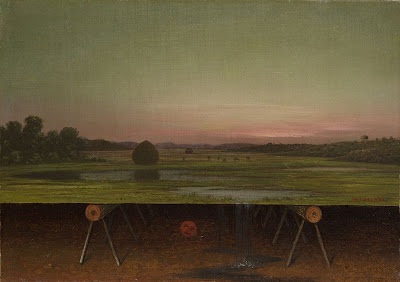 In case you have trouble seeing this picture at this scale, there is a little gremlin dancing under the painting of the Newbury marshes.  He smirks as water drips off the painting and onto the floor. The naughty little guy pulled on the canvas and now the floor of the studio is getting wet.  Trompe l'oeil or trick of the eye is a genre in painting with its own story and people who write about art like to worry the subject of the artifice in art.
It is easy to forget that humor is not a recent invention in art.  Martin Johnson Heade (1819-1904)certainly was aware of the serious debates among other artists of the Hudson River School about the merits of naturalism versus artifice.  With one (actually, there are two versions of Gremlins in The Studio) work the size of an  ordinary book page, Heade winked it all away.
Of course, Heade was a serious artist and the marshlands were his chosen subject.  Out of six hundred paintings, fully a fifth were  images of of a landscape subject to the constant movement of the tides, its moist air fragmenting the light and changing colors before his eye.  To create works of evanescent beauty on canvas requires many skills.  It turns out that one of Heade's was a sense of humor. 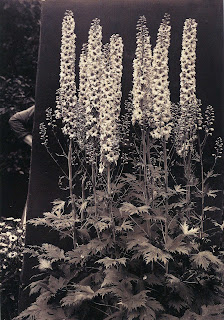 And then there is Charles Jones (1866-1959) a British gardener and amateur photographer, forgotten by the world until Sean Sexton discovered a cache of his work when he purchased an old trunk at a London bazaar in 1981.
Plant Kingdoms (1998), the resulting book, is impressive in every respect, from Jones's photographs to Sexton's text, full of poetry and insight, to the appreciation penned by Alice Waters, founder of Chez Panisse Restaurant in Berkeley, California.
Jones usually photographed his fruits and vegetables in front of flat, blank backdrops. We seldom see them this way now, gleaming with moisture, dug from the ground or plucked from the vine, found works of art. It was Jones' wit to see that what he had made was worthy of recording.
Garden Scene with Photographer's Cloth Backdrop (c. 1900) is a premature example of modern irony. We realize that the backdrop is a photographer's studio cloth when we notice a crooked elbow and part of an apron peeking out from behind the scrim.  Jones, who liked to move in on his subjects for close-ups, here backs off the camera to show truly giant-sized flowers.  That crooked arm resting on hip telegraphs the joke: wow!

Posted by Jane Librizzi at 7:39 AM 2 comments: Links to this post 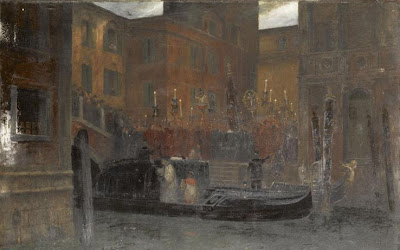 I
"Two old men, father-in-law and son-in-law, Liszt and Wagner,
are staying on the Grande Canal
together with the restless woman who is married to King Midas
he who turns everything he touches into Wagner.
The green chill of the sea pushes up through the palace floors.
Wagner is a marked man, the well known Caspar profile is more tired than before
his face a white flag.
The gondola is heavily laden with their lives,
two round trips and one one-way.

II
A window in the palace blows open, they grimace in the sudden draught.
Outside on the water, the garbage gondola appears, paddled
by two one-oared bandits.
Liszt has composed a few chords so heavy they ought to be sent
to the mineralogical institute in Padua for analysis.
Meteorites!
Too heavy to rest, they are able only to sink and sink through the future
all the way down to the year of the brownshirts.
The gondola is heavily laden with the huddled stones of the future.

III
Openings toward 1990.
March 25: Worry about Lithuania.
Dreamt I visited a large hospital.
No staff. Everyone was a patient.
In the same dream a newborn girl
who spoke in complete sentences.

IV
Compared to his son-in-law, who is a man of his time, Liszt is a
motheaten grandseigneur.
It's a disguise.
The deep that tries out and discards various masks has chosen
just this one for him—
the deep that wants to join the humans without showing its face.

V
Abbé Liszt is used to carrying his own suitcase through sleet and sunshine
and when the time comes to die there will be no one there
to meet him at the station.
A tepid breeze of highly gifted cognac carries him off
in the midst of an assignment.
He is never free of assignments.
Two thousand letters a year!
The schoolboy who writes the misspelled word one hundred times before he is
allowed to go home.
The gondola is heavily laden with life, it is simple and black.

VI
Back to 1990.
Dreamt I drove a hundred miles in vain.
Then everything was magnified. Sparrows as large as hens
sang so that my ears popped.
Dreamt that I had drawn piano keys
on the kitchen table. I played on them, mutely.
The neighbors came in to listen.

VII
The clavier which has been silent through all of Parsifal (but it has listened)
is at last allowed to say something.
Sighs...sospiri...
When Liszt plays tonight he holds down the sea-pedal so that
the green force of the sea
rises through the floor and flows together with all the stone of the building.
Good evening beautiful deep!
The gondola is heavily laden with life, it is simple and black.

VIII
Dreamt I was starting school but came late.
Everyone in the room wore white masks.
It was impossible to tell who was the teacher."
- Grief Gondola # 2 by Tomas Transtromer, translated from the Swedish by Malena Morling, 1998. 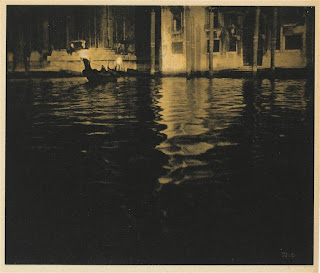 Call it La lugubre gondole, or the funeral gondola.  In French it sounds fitting for the experience of a grieving widow.  Let us specify Cosima Lizst von Bulow Wagner, whose name merely hints at  a life rich in incident. Daughter of composer Franz Lizst, wife of the influential music critic Hans von Bulow, mistress, wife and finally widow of composer Richard Wagner.
In the poem (above) by recent Nobel Literature laureate Tomas Transtromer it becomes  Grief Gondola #2.  The "#2" refers to Lizst's several versions of a piece he composed in the wake of his son-in-law's death on February 13, 1883 in Venice.  The second version for piano is the best known and was included in the composer's portfolio of Transcendental Etudes.
"My wife is very strong-willed,"  Hans von Bulow had noted mildly of his young bride.  Cosima was the mother of two young girls when, at twenty-six, she began a flagrant affair with Richard Wagner.  Seven years and three children (whom she passed off as von Bulow's) later, and after an apology from Wagner's royal patron for exiling the composer when rumors ran rampant, the lovers were finally wed in 1870.
Strong-willed as Cosima was, she was not granted her wish to die with Wagner "in the selfsame hour."   When Wagner died  the making of the death mask had to be postponed while Cosima clung to the decaying corpse.  The funeral procession that took Wagner's remains back to Bayreuth sailed down the Grand Canal, with a gondola draped in black.  No one could see the widow who had cut off her  hair and stuffed it into the coffin.
Lizst had disapproved his daughter's conduct but the two reconciled and he visited the Wagners for the last time at Christmastime 1862.  Perhaps his own numerous health problems contributed to Lizst's premonition of Wagner's death.  We know his imagination was transfixed by the funeral processions, gliding silently along the  canal like so many black swans, by his use of poignant augmented triads, drifting toward atonality.

Tomas Transtromer was one of those writers I had meant to look into, until he won the Nobel Prize for Literature last year and events overtook me. Now there are books to choose from and not just the odd poem included in an anthology here and there.  I've wrestled with Lizst's piano pieces,  especially the beautiful Consolation in B-flat, but not Der Trauer Gondel and failed to mention the celebrations of Lizst's bicentennial year in 2011.
Images:
1. Joseph Saint-Germier - A Burial In Venice, 1899, Musee d'Orsay, Paris.
2. Edward Steichen - Late Afternoon - Venice, originally printed in Camera Work for April 1913, Musee d'Orsay, Paris.

Posted by Jane Librizzi at 10:49 AM 4 comments: Links to this post