Idealized nudes at play in antique landscapes.  That is all most museum-goers know of Arthur Bowen Davies after seeing his most famous painting Unicorns or Legend – Sea Calm (1906) at the Metropolitan Museum of Art.  Not inaccurate so far as it goes but there is more to Davies than that. His name is found most often these days in footnotes but his fingerprints are everywhere, especially in New York.  He was, in fact, the principal organizer of the Armory Show in 1913, the exhibition that introduced modernism as a force to be reckoned with in the American art world. If you think you see a response to Marcel Duchamp's Nude Descending a Staircase No. 2 (1912), the most notorious single piece of art from the Armory Show, in Figures (at left)


Arthur Bowen Davies (1863-1928), was born in Utica, New York, a city on the Mohawk River near the southern edge of the Adirondack Mountains  in upstate New York.   One of several cities that grew up along the Erie Canal, Utica prospered with the growing textile industry. Three of its wealthiest families were also discerning and eclectic art collectors and their names are memorialized today in a museum and art school – the Munson Williams Proctor Institute, founded in 1919.   A large touring exhibition of landscape paintings that visited the Utica Art Association  in 1878 and included works by George Inness turned Davies’ interest in drawing into a vocation. 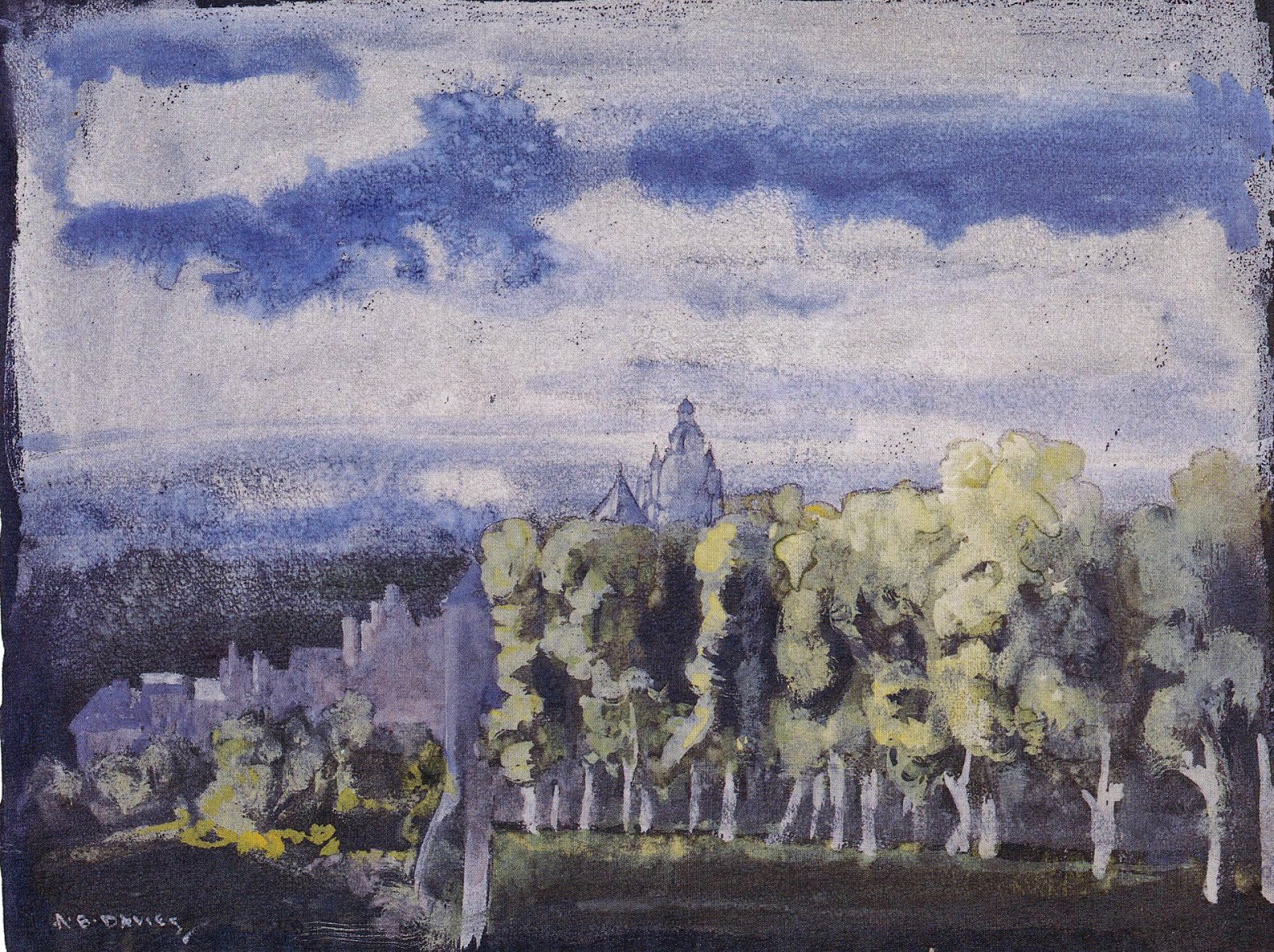 The bouillabaisse of Greek, Roman, and Renaissance, influences that went into his personal symbolism makes hash of standard art historical explication.  Davies was equally as able to admire the tonialist meadow-scapes of Montclair, New Jersey by Goegre Inness and the symbol-laden places imagined by the Swiss artist Arnold Bocklin.  In History of American Painting (New York, The Macmillan Company: 1927), Samuel Isham lauded Davies as the creator a unique mythic world.   “It all has a naiveness, a belief in its own imaginings which recall early Florentine workers, the painters of allegories and decorators of cassone.” 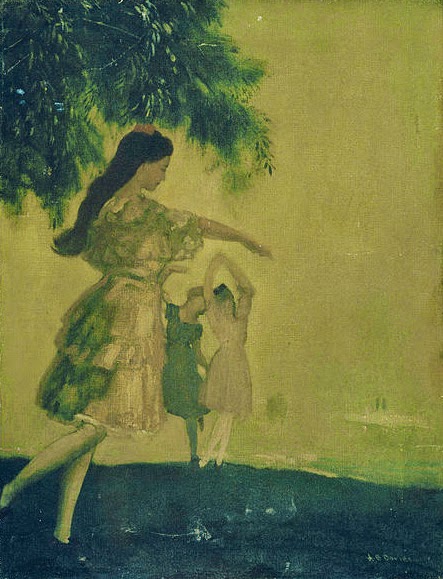 Duncam Phillips, founder of the eponymously named Phillips Collection in Washington D.C.,, thought so highly of Davies that he commissioned a book  his work in 1924 that included essays by some of the leading critics of the day, including Royal Cortissoz, Edward Walees Root, and Frank Jewett Mather, Jr: who wrote:  “One likes to imagine some analogy with the accented and unaccented notes of a bar of music.  Overt musical suggestion there is none.  The figures are without function or evident relation, but they . are sufficiently bound together by a common sense of a quiet eagerness and expectancy.  They live in a purely mental world.  They may be conceived more literally as waiting for the first chord of a music in which they are to join.” 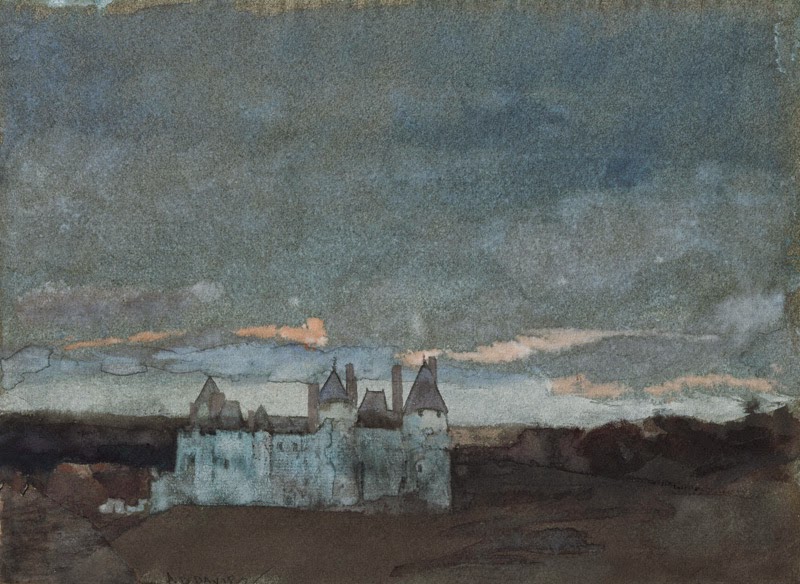 Davies was eclectic, if not omnivorous in his tastes.  The man whose work was compared to the romantic Puvis de Chavannes was also the collector of Joseph Stella and Paul Cezanne.  It was Davies whose advice guided Lillie Bliss and Abby Aldrich Rockefeller as they assembled their collections that became the foundation of the Museum of Modern Art.

Davies excelled at pastel.  The British humor magazine Punch had dubbed James McNeill Whistler the “Genius of Smudge” in 1877 for his atmospheric use of pastel, not intending it as a compliment. A smudge is a technique used by artists in pastel and watercolor.  Sadakichi Hartmann, writing as Sydney Allan in Camera Work 7 (July 1904) in “The Technique of Mystery and Blurred Effects”, argued that while the old masters would have  considered modern artists like Davies limited, it was exactly this deliberate limitation that made them superior: “in the depiction of atmospheric effects and subtler emotion.”  Arthur Bowen Davies left off dating or identifying his pastels, another form of smudging.  To a farmer a smudge is a mass of burning organic matter, placed on the windward side of vegetation to protect crops from frost on cold nights.  This too is a type of filter.

Davies is known to have favored working from the background forward in his landscapes, providing the opportunity to layer memories onto the scene in front of him. That is to say that Davies created his alndscapes in much the way that we look at them ourselves.  If art criticism were no not skewed toward theories and away from observation  at this particular moment, that would be so obvious as to be unremarkable. To my eyes the Davies landscape pastels are always filtered through a palimpsest of upstate New York, even when the subject is France, Italy, or Switzerland.


But the smudge and the palimpsest are techniques that resonated with something in Davies’ character as well as his work.  It was only after his sudden death while vacationing in Florence that friends learned that Davies had maintained two wives and two families at the same time, a secret he kept for decades. 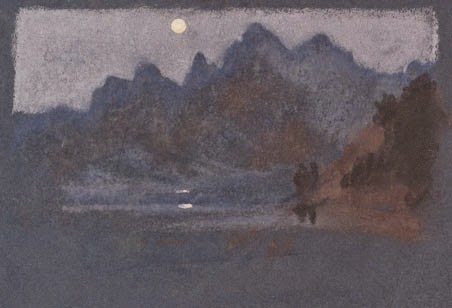