Ornette Coleman in the Garden Of Music 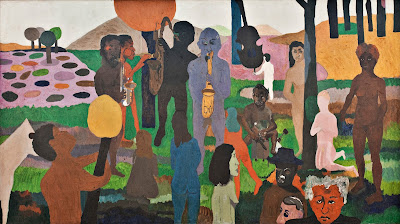 "Jazz is the only music in which the same note can be played, night after night but differently each time."  - Ornette Coleman

With the death of Ornette Coleman on June 11, they are all gone with the exception of saxophonist Sonny Rollins.  The musicians who congregated in the Lower East Side apartment of the artist Bob Thompson (1937-1966) around 1960 were the Fauves (wild ones) of the music world, as Thompson, with his classical models,  was  - and was not - in paintings.    Thanks to Thompson we have here an image that captures them in grand style.
Thompson was a figurative painter working at the high tide of abstract expressionism, just before it crashed into Pop and Op art.  Using the Fauve palette of a Gauguin, Thompson re-interpreted  Christian subjects (The Flagellation Of Christ) to the Caprichos, satires of human folly by Francisco Goya (Stage Doom).   The Kentucky native became the quintessential bohemian, living and working in a downtown studio without benefit of heat or water.  Together with saxophonist Jackie McLean, Thompson even lent a hand to establish Slugs, a jazz club for the avant-garde.  In the event, Bob Thompson was the first to go; he  died in Rome, Italy, where he had gone to study the works of his beloved classical painters - Piero Della Francesca and Raphael.

"It was when I found out I could make mistakes that I knew I was on to something." - Ornette Coleman 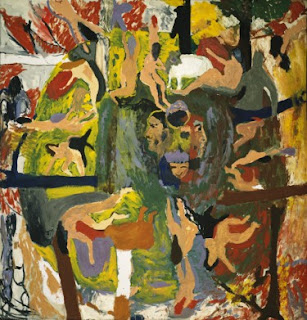 Coleman was born in Ft. Worth, Texas where he was banished from his high school band for improvising, the very thing that would eventually set his music apart from the jazz mainstream, delighting some and outraging others.  Most musicians play instruments tuned -or tempered - to compromise pure intonation to work within musical scales.    Coleman set himself the task to get in between those notes, to find ways to make those micro-tones audible.  Without wading too far into the weeds, technically, in Coleman's bands, solos floated free of the underlying melodies; he called it harmolidcs and then sound grammar.  In 2007 Coleman's cd Sound Grammar became the occasion for the award of a Pulitzer Prize in music.


Although  the instrument least suited to take on Coleman's music, it was through a recording by the Canadian pianist Renee Rosnes I learned to hear and enjoy his music.   Her attaca, moving quickly from  phrase to phrase, managed to intimate something close to inaudible.  But the music, like Bob Thompson's painting, is a celebration of movement and color.  With the notable exception of the lovely ballad Lonely Woman, Coleman composed mostly in major keys:  Ramblin, Peace, Turnaround, Una Muy Bonita, When Will the Blues Leave, etc.

From an interview with Marc Myers of allaboutjazz.com on June 12:
"He (Coleman) knew exactly what he was doing.  He was channeling Charlie parker's free spirit.  He was also adventurous.  It takes enormous courage to play music that many people might not like and to stick with it, no matter what."

Yes! Sonny Rollins is the last one."Over and over, decade after decade, from the late seventies through the eighties and nineties, there he is, Sonny Rollins, the saxophone colossus, playing somewhere in the world, some afternoon or some eight o'clock somewhere, pursuing the combination of emotion, memory, thought, and aesthetic design with a command that allows him to achieve spontaneous grandiloquence. With its brass body, its pearl-button keys, its mouthpiece, and its cane reed, the horn becomes the vessel for the epic of Rollins' talent and the undimmed power and lore of his jazz ancestors." - Stanley Crouch

Awesome Artwork!appears on the cover of Antebellum Dreambook by Dr. Elizabeth Alexander.

Thanks, Gail for the information. I'm going to search out this book!