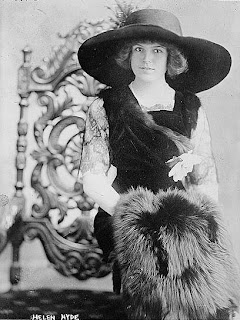 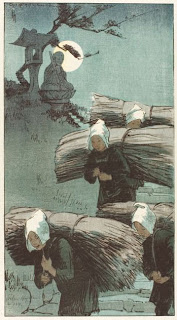 Whenever I look at this photograph of Helen Hyde (1868-1919) I wish I could have known her.  The charm, pluck, determination and artistic sense of this picture turn out to be true to life.


Bertha Jaques was a twenty-five year old printer when she first read about Helen Hyde's work in The International Studio (1898).  “With the confidence of early enthusiasm, I wrote Miss Hyde that I did not believe in adding color to etching and would like to know what she had to say about it.”  Hyde responded, sending along two of her own color etchings, and a friendship was established. The two women met four years later when Hyde visited Jacques at her Chicago home.  In between times Hyde spent three years in Japan, studying and working with Japanese print makers.  She may have been the first American to make woodcuts in Japan.

Hyde’s career began with color etching.  She was born in the small town of Lima, in western New York on April 6, 1868,  but lived most of her childhood at the other end of the States in San Francisco. A wealthy aunt financed Helen’s education at Wellesley College.
Her studies took Hyde to New York, Paris, and Berlin, but what was more unusual was her determination to study in Holland, spurred by affection for Dutch painting.  When Hyde returned to San Francisco she began to illustrate children’s books, Moon Babies and Jingles From Japan, etc..  During the fifteen years that she lived in Japan, Hyde had two homes: a winter home in Toyko and a summer home at Nikko, in the north. 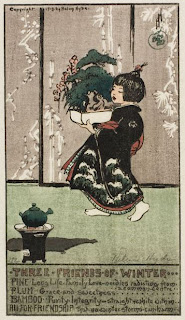 In Japan, Hyde apprenticed herself to Kano Tomonobu, the ninth and last of the respected Kano school of brush painters. She learned the traditional method of drawing bamboo:by dipping one corner of the brush into black ink and the other into gray.  Then to sweep upward with one side of the brush and down with the other and – viola!
Jaques writes that this training was responsible for the unique look of Hyde’s woodblock prints.  “They are direct, flowing and graceful in line.” Jaques also recognized in Hyde’s characters the charm and lack of grotesquerie that separated her work from the traditional Japanese masters.  Hyde’s prints also have a distinctive palette of apple green, rose pink and a blend of the two that produces an olive shade. 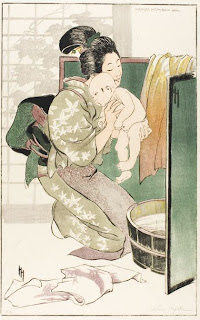 Like other contemporary women artists, notably Mary Cassatt, Hyde often featured mothers and children in her work.  In her correspondence, she referred repeatedly to her works as her "children" in a manner that may strike a modern reader as odd.  As a single woman who worked unapologetically  and traveled widely.   Hyde may have responded to the unease that a successful professional woman aroused.  These days it is the charm of Hyde's work and her unselfconsciousness in cross cultural boundaries that makes for unease. 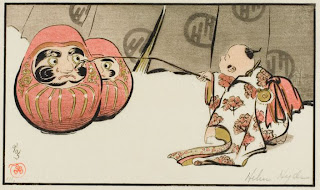 Sometimes, the images just require a bit of explanation, as in Teasing The Daruma   Daruma was a sage of India who fell into a meditation that lasted nine years, to be awakened by a rat nibbling on his ear . This probably explains why he is usually portrayed with an irritable expression.  Chagrined at being caught sleeping,  the daruma cut off his eyelids and threw them on the ground.  A tea bush grew up on the spot, whose leaves kept him awake.  Typically, a Daruma toy is weighted on the bottom so children can knock it over and it will spring back up.

Helen Hyde died in San Francisco on May 13, 1919 and was buried by her two sisters in the Hyde family plot near Oakland “under a blanket of white wisteria and lavender iris, which she loved as all her friends loved her.”   Bertha Jaques' Helen Hyde and Her Work is the work of a printer well  known for her generosity toward other artists. 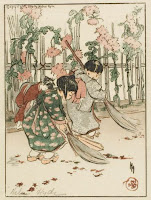 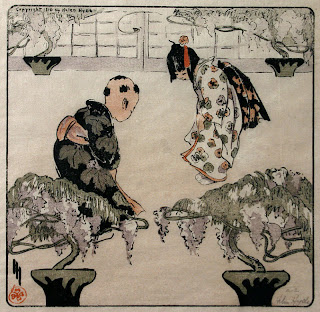 To read more about Helen Hyde: HELEN HYDE AND HER WORK: AN APPRECIATION by Bertha Jaques
Chicago, The Libby Company: 1922

Posted by Jane Librizzi at 11:16 AM 7 comments: Links to this post