Two Old Maids And A Widow 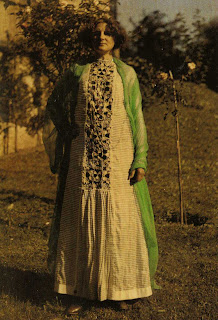 Imagine this autochrome portrait of Emilie Floge at ten feet tall.  That is what I saw when I entered the second floor salon at the Neue Galerie in Manhattan.    Hanging in front of some half dozen French windows were larger than life transparencies of photographs of the Austrian designer.   As part of the exhibition Wiener Werkstatte Jewelry, they showed Floge wearing necklaces and brooches that were on display, dressed in outfits she designed for her business, Schwestern Floge.  The transparent scarf, designed at the Werkstatte, was an idea borrowed by the French designer Paul Poiret after a visit to Vienna in 1911.

This brooch  from the exhibition, designed by Josef Hoffmann and made of silver and gilt, coral, opal, and lapis lazuli, may have been for sale at the Floge salon in Vienna.  It is exemplary of the mixture of Art Nouveau and Art Deco tendencies popular in the early 20th century and, also, of a problem Viennese designers faced, but never solved. 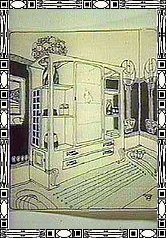 "It was Emilie Floge in particular who kept the shop going.  It was due only to her initiative that the firm reached such a height...And then she worked like an artist, like a sculptor, at the dummy." - Herta Wanke, longtime employee.

The stark atmosphere that Hoffmann created for the salon  was stylishly a la japonaise and was an apt background for the bright colors of the clothes, intended to be just as much a provocation to the bourgeois Viennese as the paintings of Les Fauves or Der Blaue Reiter.  Among the customers were Sonia Knips and Friedricke Beer, daughter of the owner of the famous Kaiser Bar.  Like Emilie Floge, both sat for the painter Gustav Klimt. 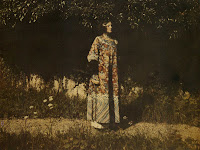 Schwestern Floge opened its doors in 1904, its proprietors were three sisters: Emilie (31), Helene (34 and a widow) and Pauline (39). The Floge family belonged to Vienna's unemancipated  lower middle class. and, left fatherless in 1897, needed to earn their way. You could say the business began when the sisters were commissioned to design outfits in the new 'reform' style for a cooking demonstration.  Fin-de-siecle Vienna was more recepetive to reforms in women's dress than in political emancipation.  Freeing their bodies from restrictive corsets proved easier than throwing off the inconsistencies in sexual relationships or financial dependence on men.  Also, Viennese society saw reform dress as a way to declare fashion independence from Paris. 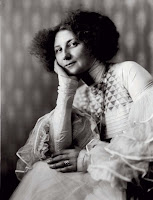 Emilie Floge (1874-1962) was known for her nervous disposition and, in  later years,she was considered aloof.  A sense of responsibility toward her sisters must have weighed on the freshness and unpretentiousness that her friends admired.  She became an early, enthusiastic driver,and a familiar sight in her yellow sports car.  Twice a year, she traveled to Paris to check out the competition and to buy her fabrics.

This portrait of Emilie Floge, made by Gustav Klimt in 1902, as Floge was preparing to open her great business venture is, for most of us, our introduction to this remarkable woman.  I found my uneasiness underlined by her contemporary, Hans Koeck: "The material consciously fits tight around the neck of the woman wearing the dress, as if to throttle her, as though the artist were aiming at the erotic effect of strangulation as in his 1902 portrait of Emilie Floge. Traces of his sublime sadistic imagination can be found on all occaions where the wearer's neck and breast are enclosed by an armour of fabric." 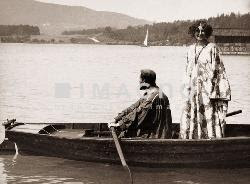 The nature of the relationship between Floge and Klimt has always been a delicious topic for speculation.  Throughout his adult life Klimt shared a flat with his mother and his sisters, Klara and Hermoine.  One doubts that he slept there overmuch as there three documented illegitimate children and a total of fourteen made claims on his estate (Emilie was his executor) after his death in 1918.

Klimt was an unapologetic exploiter of sexual inequality, an old Adam.  Floge was regarded as an old maid in her day, but she was also a person with financial responsibilities who endeavored to use her talents to become a new Eve.  They had a very close relationship that was complicated by the bizarre mores of their time.  In his book Sex And Character (1903), the young philosopher Otto Weininger wrote: 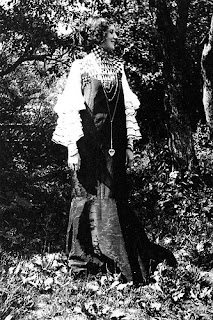 Kathe Frolich, fiancee of the dramatist Franz Grillparzer, knew both of them, and wrote:

Epilogue to a career:  The Nazi invasion of Austria in 1938 brought an end to Schwestern Floge and the sisters retired to Ungarsgasse 39.  Their loyal employee Herta Wanke remembered the sadness of that time:

Fascinating post, Jane. I love the picture research, especially the photo of Klimt and Emilie in the boat. She looks very happy, which she doesn't in the other images.

"No-one was interested in Jugendstil" !!! Now that is a sad state of affairs.

Neil, I think she's smiling in the last three pictures (all taken on vacations at Lake Attersee). The first picture and the last two were among the blow-ups at the Neue Galerie - not much research needed when you stand in front of photos almost twice as tall as you are.
My guess, for what it's worth, is that Floge and Klimt did not have an affair.

Rouchswalwe, sad indeed. But not to worry, I've read that Vienna is planning all manner of Jugendstil exhibitions for 2012, the 150th anniversary of Klimt's birth. A great artist but hardly an admirable man.

I love the brooch designed by Josef Hoffmann and made of silver and gilt, coral, opal and lapis lazuli. It has been published before but not mentioned that it may have been for sale at the Floge salon in Vienna. If so, it was presumably to be made in vast numbers, not a one-off present to an individual girlfriend.

I'd love to know what problem Viennese designers faced, but never solved.

Thanks for the link
Hels
http://melbourneblogger.blogspot.com/2011/06/vienna-art-and-design-exhibition-in.html

Hels, I think the comparison of clothing made by various establishments is a good example of the problem of price. Even though much of the jewelry produced by the Wiener Werkstatte used semi-precious stones, it was still expensive. The long necklace with the heart pendant at the end (worn by Floge in the last photo)was also in the exhibition but I can't remember who designed it.

I included you, Jane, in a little art blogger appreciation I put up today. Why I did not mention this fascinating post now escapes me.

The Neue Galerie is an amazing place.

Welcome, A.T. I agree completely about the Neue Galerie in Manhattan. Before I went there, I asked a former art history student for his opinion and he responded that it was an interesting museum if you like "the Klimt ladies." He gave me a set of magnets of "the Klimt ladies" and they are on my refrigerator now.

I've often wondered about Emilie Flöge - thanks for this interesting post on her life. Klimt has always seemed to me like one of those artists like Gauguin - it's better to just keep your eyes on their work because as human beings they weren't very nice.

Melinda, Wolfgang Georg Fischer's book "Gustav Klimt & Emilie Floge:An Artist And His Muse" is informative but noticeably slanted. It's not always a good thing for an accomplished woman to be linked with an accomplished man. Men tend to assume the woman is secondary. As it is, I wonder if I have failed to do justice to Pauline Floge and Helene Floge Klimt, but there's very little information about them. I'd love to know more about the property from the Emilie Floge estate that Sotheby's auctioned off in 1999.

Melinda
isn't that the truth! What does a person do?

Gauguin sent his wife and 5 children out of France to his parents in law, and never saw them again. While he luxuriated in the Pacific islands!

Degas, whose work I used to love, was a vicious anti-Semite who never spoke to his Pere Pissarro again.

Charles Dickens, whose writing I used to love, was so disgusted with his wife's floppy stomach after having HIS 10 children, he threw her out of the house and forbade the children from talking to her.

I think the root of our discomfort is a desire that the work and its creator(s) share the same attributes. It also calls into question the notion of 'personal expression.'

Blue Lantern Jane, I enjoyed this post - particularly for your description of the Neue Galerie exhibit featuring Wiener Werstatte, Floge, and Klimt.

Researching Wiener Werkstatte and most recently looking for any information of Schwestern Floge, your post came to my attention. Very informative.

These last comments here reflect the disappointment felt when one learns the personal life/ethics of a great artist or writer does not measure up to the public's admiration and perception. I agree - and feel it is easier to enjoy a masterpiece when its creator is of good character.

It may be less satisfying but more instructive to explore how the creative impulse works in imperfect people (all of us). But I do understand the feeling, Toile la la. Thanks for your comment.