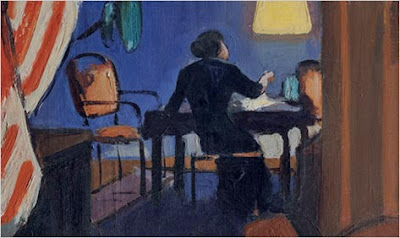 "Between too early and too late there is never more than a moment." - Franz Werfel, 1944.

Frnaz Werfel called it  an "intricate little tale of a marriage" and if that were all that Pale Blue Ink In A Lady's Hand was, that would be enough.  But, written  between February and April of 1940, Franz Werfel's brief novel was a unique Zeitroman, capturing the moment before Europe went into moral free fall.   Set  Vienna in 1936, the characters  are members of the haute-bourgeoisie and the Austrian civil service whose  easy accommodation to anti-semitism foreshadowed the Anschluss.    Werfel may have been drawn to write about acts of bad faith, having been conveniently out of Vienna on the island of Capri in 1938.   Critics accused him on occasion of being way too assimilated for their tastes.
In the event, Werfel finished the novel only a month before  Hitler's army invaded  France. The Werfels managed to flee to the United States where they settled in southern California, along with many other European exiles.  The  novel also became a casualty of war.   Too grim for American publishers, it first appeared in a German edition under the imprint of Editorial Estrellas in Buenos Aires.   An English translation was published in the U.S. in 1944 that altered the anti-semitic characters.  A restored version was published in  Europe in the 1970s and a new English translation appeared in 2012 from David R. Godine.  And about time, too.


The events of Pale Blue Ink In A Lady's Hand take place during the course of one day in the life of
Leonidas Tachezy,  a self-made man and a darling of the gods.   Tall, blond, and powerful, Tachezy is a fifty year-old Austrian civil servant married to a younger woman.  Son of a high school teacher,  Tachezy earned the money for his university education by tutoring boys from wealthy families, boys he despised but envied.  Through the suicide of a Jewish friend, Tachezy secures his entree to Viennese society that enables him to meet Amelie Paradini, a beautiful heiress.  It is Amelie who chooses Leonidas over his rivals, elevating him through her love. 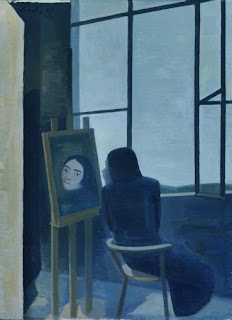 When we meet this couple, we recognize in her husband's attitude to Amelie,  familiar aspects of the 'trophy wife'.
"...Amelie's bare shoulders and arms were immaculate, not one blemish, not one tiny hair.  The perfumed, marble white skin came not only from good breeding, it came from constant cosmetic care, which she took as seriously as divine duty.  Amelie wanted to remain  young and beautiful and thinfor Leonidas.  Thin above all else.  That required that she be hard on herself.  She strayed not from the sheer path of this virtue.    her small breasts showed pointed and firm under her black leotard.  They were the breasts of an eighteen year-old.

We pay for those virgin breasts with childlessness, the husband thinks now.  And this notion took him by surprise for as the determined defender of his undivided pleasure he had never entertained a desire for children. " Effectively, our escape is blocked from the safe perch of  autre temps, autre mores.


And Werfel allows his protagonist no escape.  Vera,  the writer of the  pale blue ink is not the great love of Tachezy's life.  She was fourteen years old when Tachezy tutored her brotherbut he remembered her.  Years later, while Amelie is away caring for a sick relative, Tachezy takes his first marital separation as the  opportunity to begin an affair with Vera,   which he terminates under false pretenses.     "He could see a handsome,seductive man, one who except for that passionate episode with Vera could only be blamed for nine, maybe as many as eleven gratuitous escapades outside of his marriage."   When he receives a letter in her hand after three years he thinks she has born his child and rips the letter up without reading it. "He had acted no differently than a god from antiquity who changes his form and bends down to a child of Man."  Fifteen years later, a second letter arrives.  This time he decides to open it and, read through the lens of his bad faith, he misinterprets her message.   What follows is a Nietzschean tale of 'recurrence of the same.' 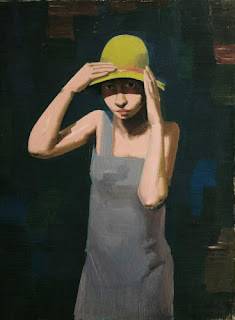 Born  to an assimilated Jewish family in Prague, the music-loving  Werfel (1890-1945) gravitated to Vienna where he became a successful playwright and fell in love with Alma Mahler, widow of the composer Gustav Mahler.  Alma resisted marriage with the Jewish Werfel for several years until the two were wed in 1929.   In his youth, Werfel had dabbled with the occult and Theosophy.

In his novels, Werfel often wrote about crises, spiritual and otherwise.  His masterpiece The Forty Days Of Musa Dagh (1933), a portrayal of  the Armenian genocide of 1915, is overdue for rediscovery.  Like Stefan Zweig, Robert Walser, and other Central European writers, Franz Werfel predated the Cold War and his work has been overlooked for that reason, especially in the U.S. 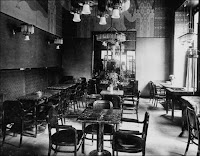 It was at the Cafe Arco, a favorite meeting place for writers in Prague, that Werfel likely met the writers Franz Kafka and Max Brod.  The three-way friendship was an emotional roller coaster.  Kafka was envious of Werfel's wealth and his early literary success. Werfel didn't care for Kafka's writing.  Werfel and Brod disagreed about music, with Werfel championing the lyricism of Verdi and Brod the new music drama of Richard Wagner.  The last novel that Kafka read was, reportedly,  Werfel's Verdi (1924).  Max Brod helped to arrange the posthumous publication of Kafka's novel Amerika.


As for the artist Franz Lerch (1895-1977), his life had parallel to Werfel's.  After graduating from the Vienna Academy, Lerch won several prizes and his paintings were snapped up by Austrian museums.  But his early  success could not protect him when the Nazis occupied Austria in 1938.  Because of his wife's Jewish origins the couple was forced to flee and Lerch destroyed many of his works.  Resettlement in New York provided safety but Lerch worked as a commercial designer, his painting confined to his off hours.

Thank you. I love the connections between Werfel, Alma Mahler, Kafka, Brod and Bauhaus celebrity who was still in Central Europe. Even if they didn't necessarily like each other.

What a waste of brilliant minds :( Werfel was very fortunate escaping to France in 1938, but what a loss of community for Vienna.

Hels, how boring would life be without complicated relationships? One of my literature professors once pointed out to us that,w ithout adultery, where would the novel be.

Tania, I think Werfel's' novel has been out of print in the U.S. since the edition of 1944! I like the French title "Une ecriture bleu pale." It's succinct.