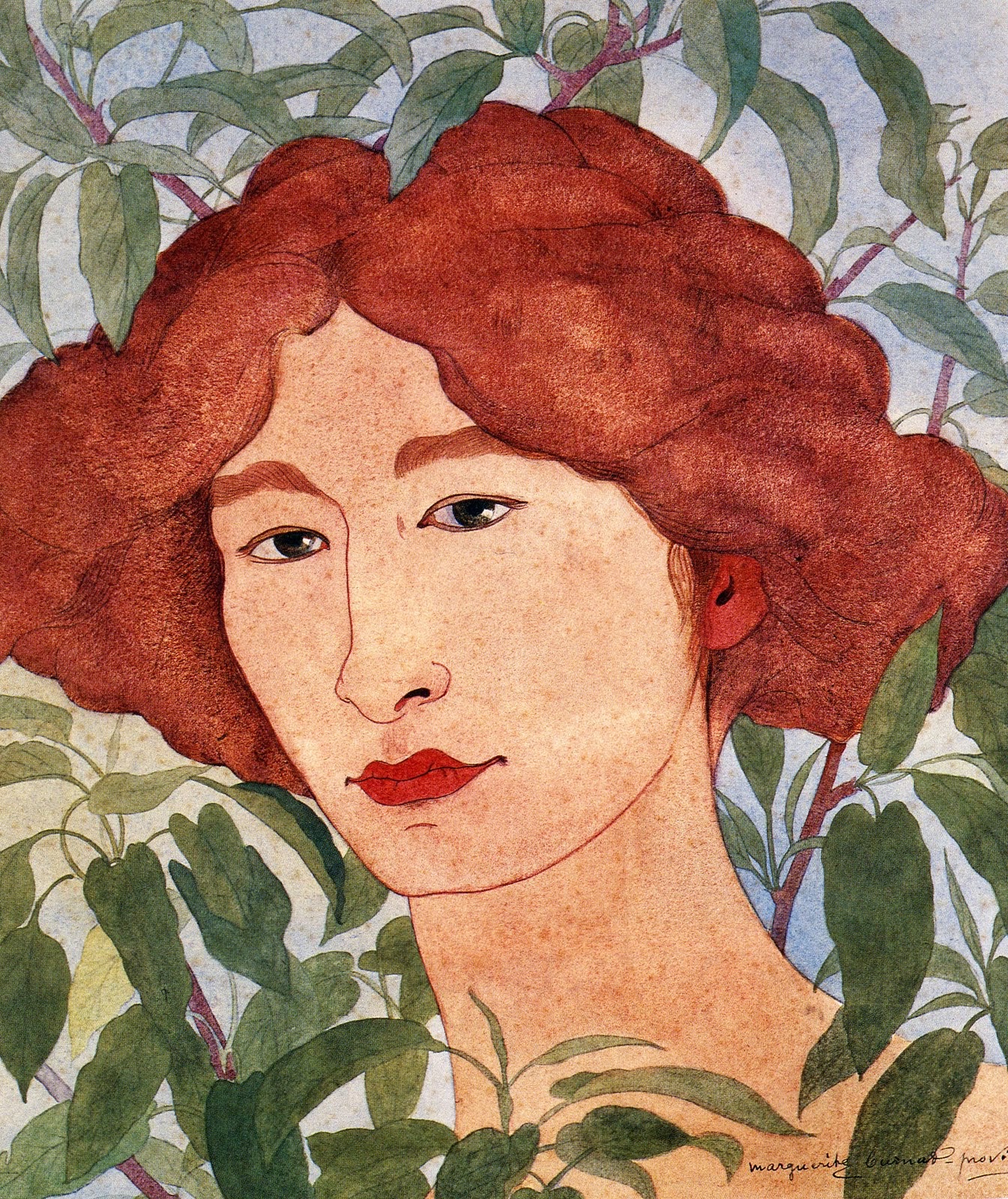 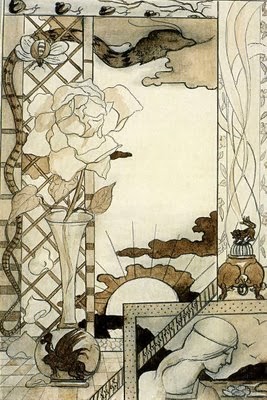 No, this is not another article about how Art Nouveau became the 'house' style of  drug-inspired  artists in the late 1960s.   It is an appreciation of the too little known French-born artist Marguerite Burnat-Provins (1872-1952) inspired, at least in part by the recent Art + Feminism Wikipedia Edit-a-thon, an international effort to promote women's voices online as editors and as subjects.  In spite of this, Burnat-Provins still goes unrecognized (except in Switzerland).
The argument for Burnat-Provins is made by her work.  That said, I think this multi-talented artist is at least as significant and arguably more interesting than her friend and contemporary, the better-known Swiss artist Ernest Bieler (1863-1948).  Burnat-Provins was also an unconventional and passionate woman at a time uncongenial to such a character and it shows in her work, even before learning something of her life.


I. "I like what is wild (sauvage) in a garden."
In her 1909 autobiography Le Couer sauvage Burnat-Provins pays tribute to her father, a cultured man who loved the arts  and encouraged his daughter to make of her life an original work. The girl recalled writing dramas and verses from the age of nine.
At nineteen she enrolled in the women's atelier at Academie Julian in Paris where she found a mentor in the painter Benjamin-Constant. Unusually for a woman at that time, Provins began a course of study in anatomy at the College of Medicine. An early self-portrait shows a young woman holding a pencil in one hand while the other hand rests on a blank sheet paper.  Her gaze is averted from the viewer, seemingly deep in contemplation. Perhaps she was thinking how she would soon end the dearth of female artists in the Symbolist Movement. 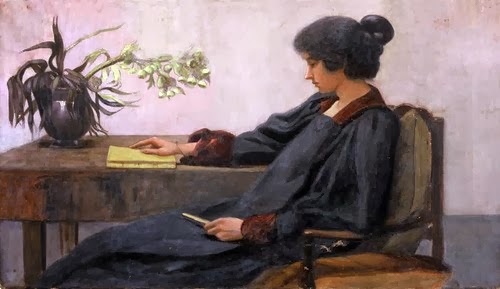 Marguerite Burnat-Provins - Self Portrait,  no date given, private collection, France.

II.  The division in me - la division du moi.
Burnat-Provins was only twenty-three when she began a series of allegories depicting the subconscious life of a young girl on the brink of womanhood. Ambivalence was a  theme in Provins' early works, both in here experiments with various styles and media and more in her meditations on what women could make of their lives. Is it enough to desire and be desired in return she wondered?  What other goals does society allow a woman to pursue ?   The portrait of her sister Marie-Therese (1900) nods lightly to the Pre-Raphaelites with its abundance of red hair and a wary, indirect gaze. Her dream-pictures, as I think of them, are unsettling and are meant to be.   Allegorie (1895), is awash in ambivalent symbolism:  a young woman turns away in her sleep from the rising sun and the fecundity of nature.  To underline the point, she is doubly boxed in to this beautiful world by the frame around the image.


At about the same time, in May,1895 Marguerite Provins met Adolph Burnat, an architect from Vevey, Switzerland. Religious differences hardly mattered; they fell in love.  The Catholic Marguerite and the Protestant Adolph were married  on February 13, 1896.  The newlyweds settled in Vevey, where they became friends with Ernest Bieler (1863-1948) who invited them to his home at Saviese in the French-speaking canton of Valais in 1898.  The area, known for its fruit farming and vineyards enchanted her.  Her enthusiasm for the Valais contrasted strongly with her boredom at Vevey  She would spent several months there each year until 1914. the only French artist in the  group  L'école de Savièse.

All proceeded on an even keel until Burnat-Provins met  Paul de Kalbermatten, an attractive young engineer in 1907, and the two fell in love, a fact underlined by the publication later that year of Le Livre pour Toi, the first of a series of passionate books about love by this artist.    The next year, she and Adolphe Burnat divorced and she moved to Savoie to be with Kalbermatten,  Then, in 1909, she underwent surgery that left her unable to have children.  Her divorce from  Burnat and her relationship with Paul de Kalbermattan were at odds with the conservative mores of her adopted home.  Like her contemporaries Colette and Camille Claudel, rumors of scandal swirled around  her personal life. 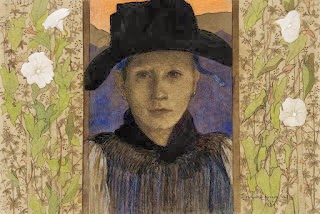 In Young Girl of Saviese, Burnat-Provins bracketed the portrait with decorative panels of  flowers and grape vines native to the Valais.    Shown at the 1900 Exposition Universelle in Paris, the picture was a great success. Shifting easily to an expressionist style in oil paints for Old Woman from Rouet she used thick strokes of color in a way that suggests familiarity with the earthy portraits of Van Gogh. Or perhaps it was just something in the air. 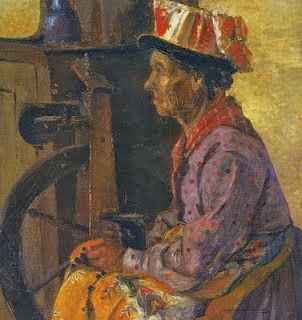 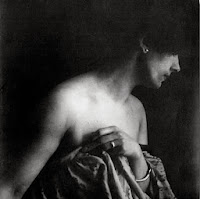 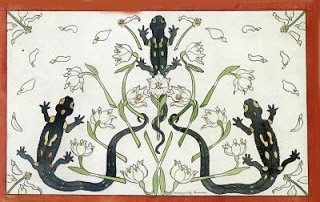 Her particular contribution to L'Art Nouveau was to adapt its curvilinear style to realistic depictions of flora (blackberries) and fauna (salamanders), making her work recognizably personal at a time when the movement was in decline thanks to a reliance on imitation that appeared mechanical and spiritless. 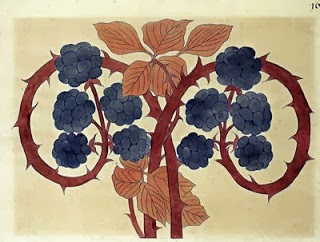 In 1904, the year L'Heures d'Automne,was published  Burnat-Provins opened the shop A La Cruche Verte (At The Green Jug )  to market her art work. 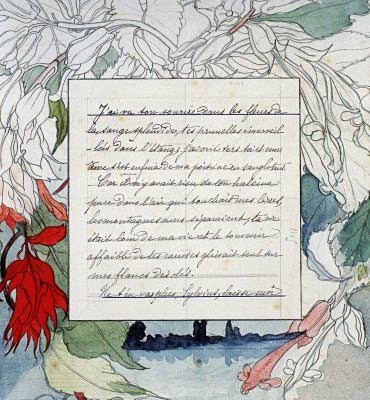 Marguerite Burnat-Provins - a page from Chapter XII of Dream for You,   c. 1911, Editions d' l'Aire,  Vevey.  This superimposing of text over decorative illustration was often used by the artists of Ver Sacrum (Sacred Spring), the official magazine of the Vienna Secession published between 1898 and 1903.

III. Beings who force themselves on me – des etres qui s'impose

After Burnat-Provins and Kalbermatten wed in London  they moved to Alexandria, Egypt where Kalbertmatten supervised construction projects. There Burnat-Provins experienced her first  hallucinations, fever dreams she endured during a bout of typhoid in 1910, an experience made more harrowing by being far from home.  A disturbance between an individual and her environment can lead to striking distortions in outlook which can manifest in new artistic forms. To Burnat-Provins, the creatures of her dreams were "ames parasitaires" (parasitic souls) engaged in a combat for her spirit between the forces of unity and disintegration.  She visualized them as bird-like creatures, sinister and  inscrutable..
Once recovered, Burnat-Provins returned to her adventurous ways, visiting the Pyramids and sight-seeing in Syria and Lebanon.  But after war broke out in 1914, Kalbermatten was drafted into the French Army and Burnat-Provins,  left alone with her anxieties for his safety, began to experience hallucinations again. So disturbed was she by these visions that, in 1916, she consulted a psychoanalyst.  By then, she had already begun to incorporate her them into her work, creating what became a series she called Ma Ville (My Town).


Ma Ville is  populated with what the artist characterized as  "des etres qui s'imposent" (beings who force themselves on me).  "I endure them, cringe as I feel them coming and simply cannot help drawing them." Unlike the characters she created under the influence of symbolism, these creatures confront the viewer open-eyed, their faces shaped by fathomless distress. Animals appear, often hovering around the humans, sometimes protectively (a cat around a woman’s head)  and  sometimes menacingly as birds that circle like vultures, sensing human vulnerability, ghostly manifestations of the artists’s febrile emotions.  The uncertainty of good fortune now possessed her. 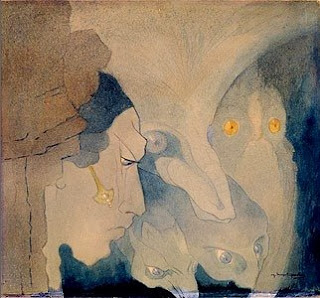 In Les Etres d'Abimes (The Scourge of the Abyss) they cluster and multiply.  But in Anthor et L'Osieau Noir (Anthor and the Black Bird – 1922), the bird appears to have fused with the woman in an ambiguous embrace.  Frilute le Peureux (Frilute the Timorous - 1915) shows a face transfixed by horror, with indescribable eyes that hold the viewer transfixed, trying to imagine what terrors they apprehend.  She even said that it felt as if the nightmarish creatures of her dream life came to her and "dictated" her paintings of them.  Because her images became increasingly bizarre Burnat-Provins has been pigeon-holed, inaccurately I think, as part of the movement called L'Art Brut, or Raw Art, a movement reveling in images of insanity and images created by artists outside the art world as men defined it 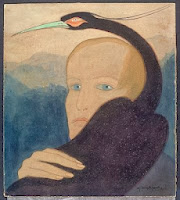 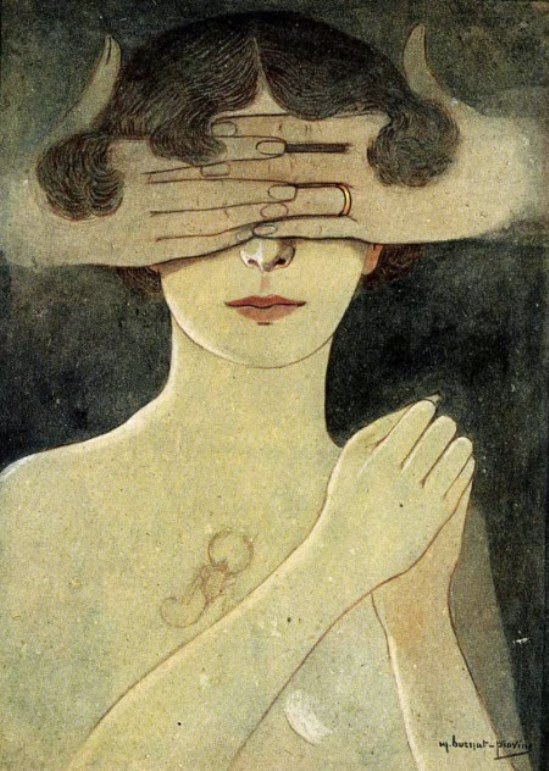 If the Symbolist movement had a mantra it would have been this: Close your eyes and look within.  Burnat-Provins returned to this idea again and again, (at left) in 1926, a middle-aged woman and a successful artist.
Her hands are clasped, as if in prayer and another pair of hands, possibly meant to suggest the hands   of her sister Marie-Therese or a singular sense of wholeness, cover her eyes.  This picture created at this point suggests a sense of trust and a sense of resolution are at least possible, along with ambivalence.

Burnat-Provins continued to work - and experiment - writing a novel in the 1930s, just published for the first time in France by Plaisir de Lire.  The Hotel takes place in colonial Maghreb and, although peppered with stereotypes typical of its time and place, tells a tale of Europeans adrift and maladroit in a country they fail to understand.
Marguerite Burnat-Provins died in 1952 at Grasse, in the Alps-Maritime region of her native France 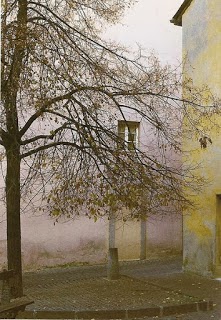 Burnat-Provins founded the Ligue Pour La Beauté in 1905 to preserve the architecture of her adopted home, an organization that still exists today.


1.The Alps-Rhone River region straddles the border between France and Switzerland is the  locale where Eric Rohmer filmed Le genou de Claire (Claire’s Knee) in 1970 in and around Annecy.
2. Rainer Marriia Rilke moved to the commune of Veyras in the Saviese region in mid-1921.  It was there that he composed Duino Elegies (1922) and Sonnets to Orpheus (1923), his crowning achievements.  He died from leukemia on 29 December 1926.  He is buried there at Raron.
Posted by Jane Librizzi at 9:52 AM

Very interesting, thanks for informations and illustrations about the painter. Wikipedia presents her as a writer. (Do you contribute for Wikipedia, Jane ? Why not ? 13%, it's not enough, we have to do something.)

Tania, thank you for the compliment! I use a public library computer, so my time online is limited. If I could afford internet at home, I could do that. And you are so right about the lack of women! It is the same in music radio, we are the minority and men like it that way.