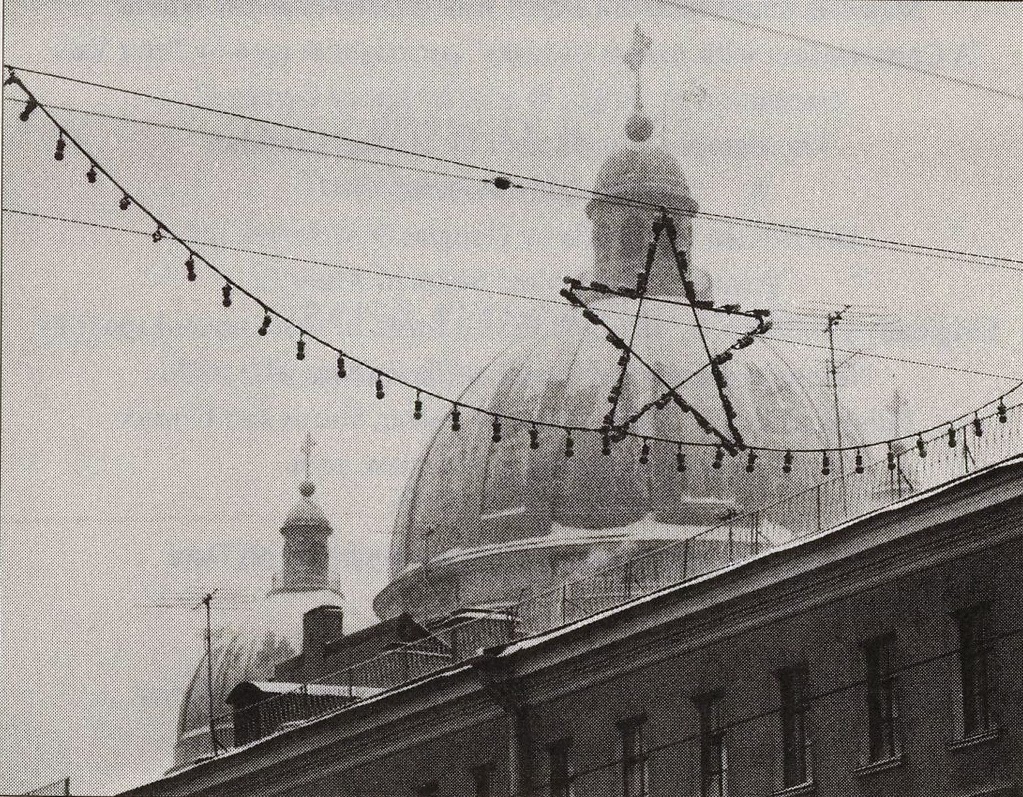 “Snow is falling, leaving the whole world unmanned,
in the minority.  Now your private detective
agency comes into its own and
you catch up with yourself  because your prints are so
recognizably defective.

Not that you're about to collect a reward
for turning yourself in.  A noiseless, nothing of note
precinct.  With the onset of night, so much light's packed
into one star-shard.

It's like refugees packed into one boat.
Mind you don't go blind.  You, yourself are on the street,
an orphan, a social pariah, an outcast
who, for all your pocket slapping, have come up with sweet
damn all.  From your mouth there issues only a dragon blast
of hot air.  Maybe the time has come for you, another
Nazarene, to offer

up a prayer for all those hotshot
wise men, from both sides of the planet, schlepping along
with their groaning coffers,
for all th little children in their carry cots.”
translated from the Russian by Paul Muldoon, 1986, in Nativity Poems by Joseph Brodsky, New York, Farrar, Straus and Giroux: 2001.

From the time he was a young man, Joseph Brodsky tried to compose a Christmas poem each year “as a sort of birthday greeting.”  To Brodsky, Christmas was a holiday and Christianity as a religion were markers of the passing of time.  Christianity, with its ordering of time – B.C. And A.D. – showed its “temerity.”   “What is included in this 'before”  he asked.? Although as a native of Russia, Brodsky might have been expected to follow the Russian Orthodox Church, he pointed out that celebrating Christmas is a more important event in Roman Catholicism. Because water is about movement and therefore connected to chronos, Brodsky liked to celebrate the holiday in Venice.
In,"Snow is falling" we can find elements from the Christmas story, refracted through the realities of life under the Soviet regime.  Brodsky undoubtedly had read the early satirists of the regime: Ilya Ilf and Yevgeny Petrov. You don't have to read The Twelve Chairs to get Brodsky' slant here, but you shoudl treat yourself.

Joseph Brodsky was born in Leningrad.  He began writing poetry in his twenties while working a s a geologist’s assistant.  His work attracted the attention of the great poet of Russia’s ‘Silver Age’, Anna Akhmatova.  Less fortunately, it also attracted the attention of the authorities.  Brodsky was a writer who believed the maxim “Everyone is entitled to my opinion.  Notwithstanding that when he was forced to emigrate, first to Vienna and then  to the United States, his application was supported most strongly  W.H. Auden, a homosexual, when Brodsky came to write a book about Venice (Watermark,1992 ), he included a number of gratuitous swipes at homosexuals, sounding like nothing so much as a cranky old man.  Brodsky, who died at age fifty-six, looked like an old man even in his forties.  Joseph Brodsky (1940-1996) was awarded the Nobel Literature Prize in 1987.

Jane, I saw Brodsky and Auden - and Allen Ginsberg - read in 1972 (?), a very formative experience. Love and peace, Neil

Neil, what an experience. By the time I knew about Brodsky, he was dead. Judging by "Watermark", Brodsky had some conflicted feelings about gay men and, for that matter, lots of other things.

I just completed a new translation of this great poem:


It is snowing, the entire world becomes a minority.
This time of the year — high season for spies,
you catch up with yourself under any guise,
betrayed by the lack of respect for authority.
A betrayal like this doesn't carry a prize;
all around you a hush is afloat.
How much light there is, crammed in the shard of a star,
in the night! like exiles in a boat.
Don't go blind, look! You yourself are an orphan,
a black sheep, a pariah, an outlaw.
To your name not a penny. Out of your maw —
frozen breath in the shape of a dragon.
Better pray out loud, like a new Nazarene,
for all those who trudge bearing gifts in the saddle
from the ends of the earth, self-proclaimed kings,
and for every child in a cradle.

Shimon, thank you. How kind of you to share this. I hope many people read both versions. Happy New Year to you.