All Things Feel: Gerard de Nerval on the Beach 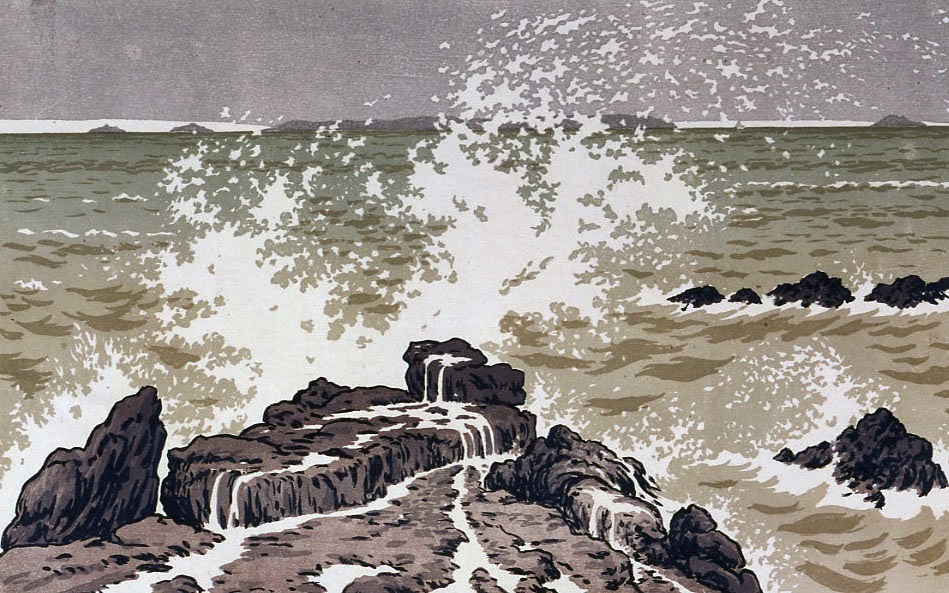 So you alone are blessed, you free-thinking man,
In a world where life sprouts in everything?
You seize the liberty to dispose of the forces you hold,
But in all your plans a sense of the universe is lacking.
Honor in each creature the spirit which moves it:
Each flower is a soul moved by Nature’s face;
In each metal resides some of love’s mystery;
“All things feel!” And all you are is powerful.
Beware, even the blind walls may spy on you:
Even matter is vested with the power of voice…
Do not make it serve an impious purpose.
Often in the most obscure beings resides yet the hidden God;
And like the infant’s eye covered by its lid,
The pure spirit forces its kernel though the husk of stones.
–Gérard de Nerval, Vers dorés (1845) in Œuvres complètes, vol. 1, p. 739 (J. Guillaume & C. Pichois eds. 1989)  (S.H. Transl.) 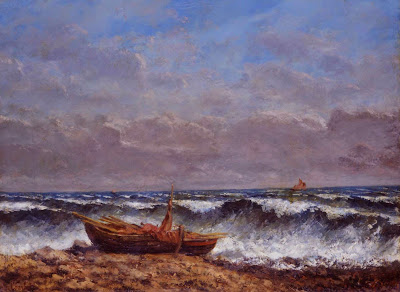 I. - “All things feel.”  So said Pythagoras twenty-five hundred years ago and, although in the intervening centuries we have had reason to question his theories on the harmony of the spheres and the mystical significance of numbers, we have only to look at landscape paintings to see that, yes, all things feel, or least that artists bring their feelings to bear on the natural world around them.
For Europeans in the 19th century, the Atlantic Ocean seemed like the edge of the world even though they knew differently thanks to scientific advances.   For the French, the northwest coastline in Brittany and Normandy took on a new aspect at mid-century when, as historians like to say, the beach was "invented."  The sea which had long been a fearsome place, the site of naval confrontations and a treacherous place for fishermen trying to make a living, was being transformed into a place for leisure and recreation thanks to a new invention, the railroad.  Along with vacationers came  painters who  took a new approach to marine painting, loosely defined.  In literature this is sometimes called the 'pathetic fallacy', when a writer attributes human emotions to natural phenomena.  But for painters the relationship to their subject was more direct, through the movement of the brush. 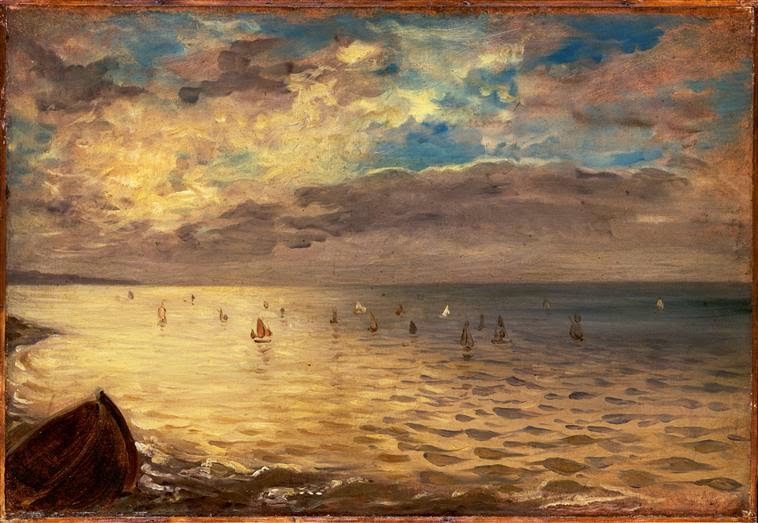 Art historians date the change to 1869 when Gustave Courbet painted  The Wave  at Etretat although its subtlies  may elude modern viewers.   Courbet based his work  on recent  scientific discoveries about the physical phenomena of tides and on the transparency and fluidity of water, foregrounded in the new medium of photography.    Along with Courbet, his friends the painters Eugene Boudin and Claude Monet, both children of upper Normandy, were equally passionate to capture what they felt in the ocean's presence.
But how, I wonder, would these same historians overlook Euegen Delacroix's painting La mer vue des hauteurs de Dieppe (The Sea Viewed from the Cliffs at Dieppe), accessibly located at the Louvre in Paris.  The color and motion in this late afternoon marine was typical of Delacroix, an admirer of artists of the Venetian Renaissance.  And in a morceau that will become suggestive farther down the page, one of Delacroix' closest friends was the writer Theophile Gauthier. 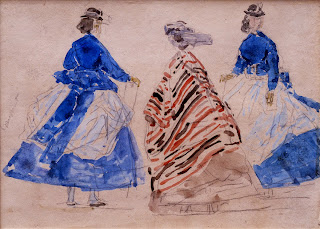 Eugene  Boudin was born in Honfleur where his father worked as a harbor pilot; Boudin himself worked on a steamboat as a boy before the family moved to Le Havre.  There he worked at a picture framing shop where the artists encouraged him to paint.  Although Boudin would live most of his adult life in Paris, he returned each summer to his beloved coast.  The “prodigious magic of air and water”  that critics saw in Boudin's work owed as much to the artist's perfectionism as to his intimate familiarity with the sea.  Although the young  Boudin spent hours carefully copying the marine paintings of seventeenth century Dutch artists like van Ruysdaehl in the Louvre, throughout his career he searched for a technique equal to what he saw and felt in nature's presence.   He confided as much as to his journal.
“Sometimes when I’m out walking….I look at this light which floods the earth, which quivers on the water and plays on clothes and it is frightening to think how much genius is required to capture so many difficulties….And then again I sense that the poetry is there and sense how to capture it.”

Other artists found other models.  Gauguin, Maurice Denis, Aristide Maillol, and Henri Riviere, all  artists who were deeply influenced  by the "floating world" of  Japanese ukiyo-e prints, a world composed of fleeting and sometimes disconnected moments.   Henri Riviere (1864-1951), who began his career putting on shadow-puppet shows in Parisian cabarets, made a series of seven lithographs Les Vagues that, by their appearance and the titles he gave them, read as so many theatrical tableaux starring the tides...small rising tide, wave rolling on the sand, wave hitting the rocks and cascading down, the tempest, etc. In his hands La tempete becomes a tableaux rather than an active menace. II. - Writers who grew up in western France also could not stop writing about their experience on the littoral either.  The correspondence between Gustave Flaubert (1821-1880) and Guy de Maupassant (1850-1893) is full of painterly descriptions of  nature in the land of  their youth, Flaubert's at Rouen and  Maupassant's at Dieppe.  It was at his mother's insistence that the seventeen year old  Maupassant met the established author.

The young Maupassant,  never happier than when he was on a boat, obtained a position at the Ministry of the Marine.  In a letter to his mother, written in September 1879, Maupassant sounds almost giddy as he rehearses the itinerary of his  vacation, reeling off  names:  Rennes, Nantes, Saint-Briac, Dinard, Saint-Malo, Coutances, Jersey, Guernsy, Cherbour, etc., ending with a reunion with his mother at Etretat.  Maupassant 's most daring book Sur l'eau (On the Water) in 1888, based on a summer cruise he piloted along the French Mediterranean.

The runaway success of La Mer (1861) penned by  historian Jules Michelet was an indicator of the new influence of landscape sensibility on writing, too.  "The ocean speaks.  The Ocean is a voice,  He speaks to the distant stars, answers their movement in its grave and solemn language.  It speaks to the earth, to the shore of a pathetic accent, dialogue with their echoes [..] This is the great voice of the ocean." Michelet.recommended choosing a vantage point for viewing the sea, a beach or a cliff, based on one's mood.  This was what contemporary painters were doing, too.  Whether they  perched on the cliffs at Etretat and Fecamp or set up on the beach below, painters were working face to face with the water 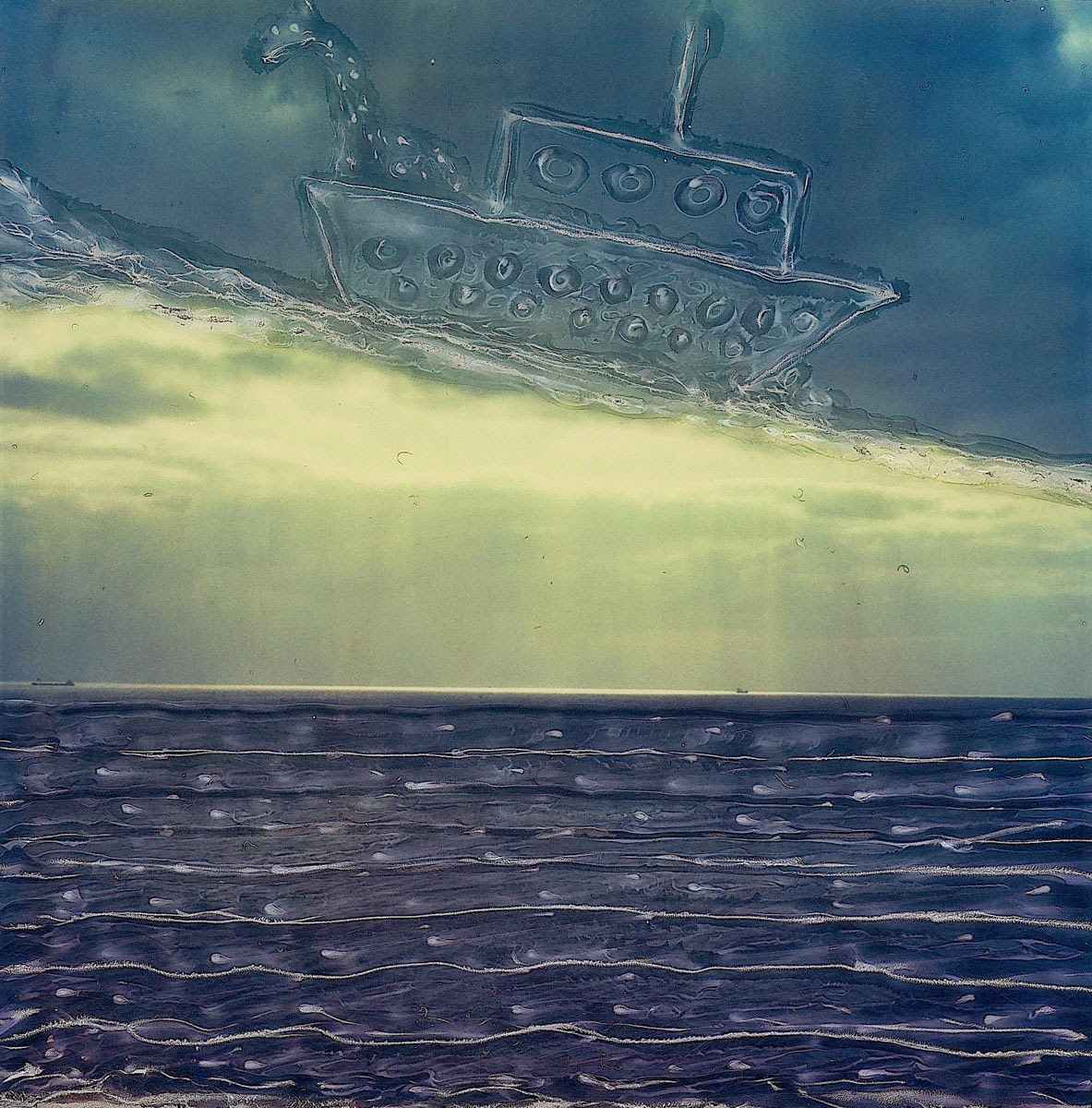 So, who was Gerard de Nerval and why does he belong in this company? What can we say about a man and his lobster?    Nerval (1808-1855) was born in Paris; after his mother died, the two year old was sent to live with her great-uncle in Valois and his life thereafter was carried out largely between two opposing poles of country and city.  He had a precocious success when he published his translation of Goethe's Faust at age eighteen; both Dumas and Baudelaire considered Nerval a genius.  When Nerval ended his life, the deed was carried out in a neighborhood soon to be demolished  to make way for Baron Hausmann's "new" Paris; he hanged himself from a sewer grate on rue de la Vielle Lanterne, convinced that he, like the old city, had exhausted its capacities.
And yet the most dramatic event of his lifeetook place at La Rochelle on the coast of Normandy. Not well known today outside France, Nerval was a romantic poet, in the vein of his lifelong friend Theophile Gauthier, author of Mademoiselle de Maupin (1835).

It was Gauthier who gave the popular imagination its first published version of Nerval and the lobster, although the poet himself wrote about it in a letter to his childhood playmate Laura LeBeau, "...dear Laura, upon regaining the town square I was accosted by the mayor who demanded that I should make a full and frank apology for stealing from the lobster nets.  I will not bore you with the rest of the story, but suffice to say that the reparations were made and little Thibault is now with me in the city..."  The tender-hearted Nerval had rescued  the lobster from certain death in a pot of boiling water and promptly decided to keep it as a pet.
What struck Nerval's contemporaries as mere eccentricity was a deeply felt conviction that all living things were connected.  "They are peaceful, sentient creatures," he wrote about lobsters. "They know the secrets of the sea, they don't bark, and they don't gobble up your nomadic privacy like dogs do. "

“Matthew Arnold, looking over
The Channel from the cliffs of Dover,
Scanned with his telescope almost
The whole French coast
As far as Etretat,
And was upon the point of saying “Ah,”
When he perceived, not far from the Aiguille,
A lobster led on a leash by the sea.
It was Nerval, enjoying his vacances. !
Alas for gravitas!  Helas for France!
Having of late been panicky
About culture and anarchy,
Arnold now left in a hurry
Foreseeing a night of worry."
- "A Prelude" by Richard Wilbur, from Anterooms, Boston, Houghton Mifflin Harcourt: 2010.

Not only had Nerval read Pythagoras, in particular the Golden Verses that inspired his  poem All Things Feel but he took to heart the Greek philosopher's example.   A strict vegetarian, Pythagoras was alleged to have contributed to his own death by acting on his principles.  When it suited him, Nerval was known to say that he had walked Thibault through the gardens of the Palais Royal on a blue leash.  Perhaps the blue ribbon that connected man  and lobster is best understood as a symbol of the waters that connect all forms of life on earth, a reminder to the humans who casually subject other sentient beings to being boiled alive in that water have obligations to these fellow beings.  In a moment of despair, Nerval wrote “This life is a hovel and a place of ill-repute.  I'm ashamed that god should see me here.”  As between between the pedantic Englishman Arnold and the tormented French romantic, the American poet Richard Wilbur casts his lot with Nerval, as I suspect most of  us would do. 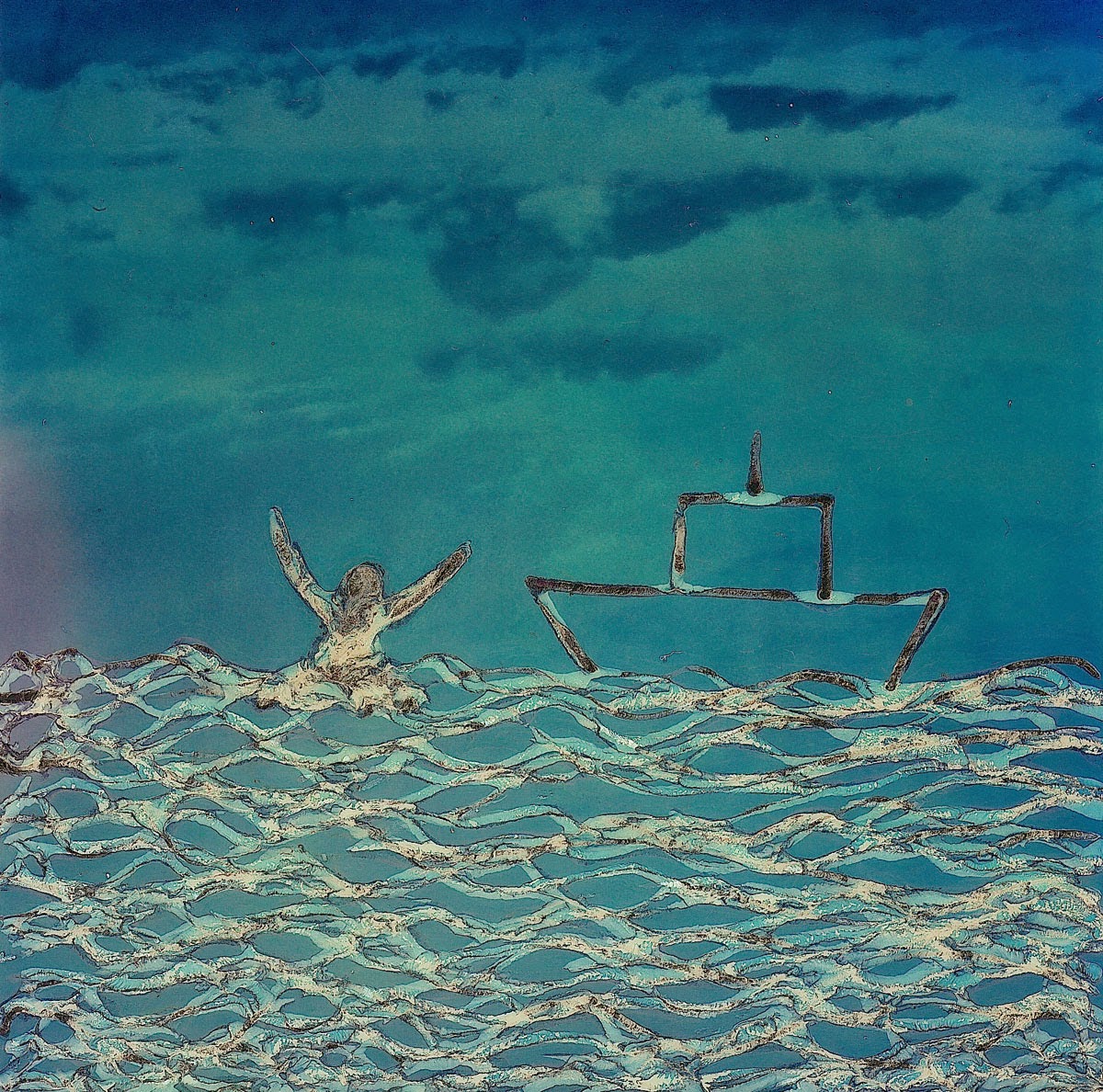 Something like despair was at work in surrealism, something connected its practitioners to Nerval, the tormented Romantic.  Dancing on the grave of one's own compassion and empathy when those emotions became insupportable .  Salvador Dali's lobster telephone (1936) was Nervals' descendant by way of Guillaume Apollinaire's poem (1911).  We know Nerval the visionary without knowing his name but we know his admirers, Anrde Breton, Marcel Proust and Rene Daumal.


Antoine Poupel is an avant-garde photographer who practices what in French is called photographie plastique, which it to say that applies paint to his photographs. Poupel was born in where esle? - Le Havre in 1956.

Nice post in blue. As the sky today on Brussels. Have a good week, Jane.
(But new captchas for comment !!!)

Those new "I am not a robot tests" annoy me too. That's Blogger's idea, not. I had trouble identifying those food-like objects>
No lobsters there, either.