Inside The Museum: Louvre City 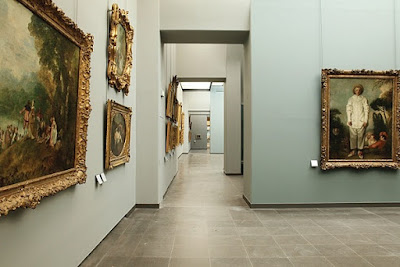 I. Antoine Watteau's Pierrot looks wonderfully at home in the freshly painted and  newly arranged  gallery of eighteenth century French paintings at the Louvre.  The painting, long known by the name Gilles, was completed almost three hundred years ago and came to the Louvre as a gift in 1869 and, although it is familiar, the museum's director hopes that Pierrot and other familiar works will be looked at anew.

The most famous museum in the world, the Louvre in Paris, France, is now undergoing its second renovation in twenty-five years, the first since the grand realignment of Parisian museums.  Try to imagine something like this happening in New York City: the Metropolitan, the Whitney, the Guggenheim and the Museum of Modern Art deciding to shuffle their collections among themselves to make a more coherent presentation of their holdings.


This suggests a question: is this the best of times  for museums or the worst of times?   Almost everywhere, attendance grows year by year,  yet public subsidies for museums  are shrinking, even in France where cultural patrimony is a serious subject and a matter of national pride. Museums have responded by expanding their galleries and building new wings or even entire museums, leaving the question of what to fill them with hanging, so to speak.
How to harmonize the received version of the museum as a 'temple of culture' with the need to make art more comprehensible to a large audience is a vexing subject, especially to those who liked things just fine the way they were, when museums catered to people who arrived, already schooled in art history.   Wall texts are not annoying to those who learn from them and audio tour devices do not signal the end of civilization.  My own personal favorite among the new devices is in use at the Herbert Johnson Museum at Cornell University; visitors are issued a smart phone with an app that you can use to call up information about the works of decorative art.  There are no lengthy texts on the walls, just unobtrusively numbered objects in the display cases.  Once you have found information about the work you are looking at, you can to continue searching in almost any direction the work leads you. 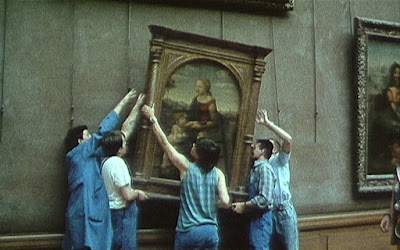 Galleries used to  crowded with paintings hung from floor to ceiling and interspersed with their owners favorite furniture and decorative objects, now they display  art work more judiciously, in envelopes of space.  This is intended to encourage contemplation but one person's contemplation may be similar to another's religious awe.  And that may be the rub.  Even more than the beautification of everyday objects, the origins of painting are entwined with religious instruction, works that were made beautiful for didactic purposes,  A Jewish friend of mine  who studied art history at Vassar College told me it felt like an education in Christianity and he was not wrong, although it is a Christianity leavened with  ancient Greek religion and paganism

The “gentlemanly hang” is the term that was used to describe  the old  style of display.  If you have been in a large art museum, you have seen its traces in placement of statues from ancient Greece and Rome interspersed with Dutch and Italian paintings from the Renaissance.  Another element of the style, long abandoned, that has reappeared on the Internet is the penchant for juxtaposing pictures based on their overt subjects.   This may explain the renewed interest in Aby Warburg's Mnemosyne Atlas  curated in the 1920s. 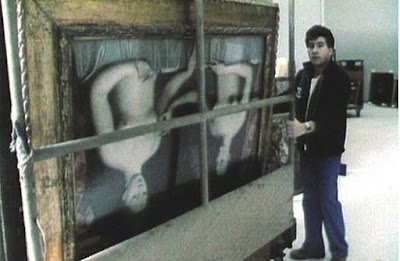 II.   “For nearly everybody, museums are scary spaces,” says James Bradburne, director of the Palazzo Strozzi in Florence.  “It’s like going into the city for the first time. There aren’t signs at every point. It is very true that at the Louvre — and every museum — we under-inform visitors”

Jean Luc Martinez, who was appointed as  the Louvre’s new president in April 2013, has made it his mission to do something about it.  “We need to breathe new life into the museum to make its fabulous collection come alive…”
Although it has more visitors each year than any other museum in the world,  the Louvre has been attracting fewer French visitors in recent years.  The  selfie-snapping crowds  besieging the Mona Lisa offend  the French sensibility of how culture should be experienced.  To better understand how the public experiences the Louvre,  Martinez visited the museum as a tourist last year, starting with a  two and hour wait  to get in.  To ease this crush, Martinez has reduced the number of temporary exhibitions and also created a new educational gallery catering to the 850,000 students who come to the museum each year.  As an eleven year old, Martinez himself made his first visit to the Louvre with his history class.


As a museum the Louvre was opened to the public on 10 August 1793, offering free admission three days a week.  In 1792 the Louvre palace had been confiscate from the royal family as part of the Revolution. Galleries that had previously existed to enhance  the pleasure  and prestige of the monarch became places where ordinary people could be educated in the art of the new republic.  Gradually the original mission has been superseded by the rearrangements of art historians but remnants of the building's origins as a medieval fortress built by order of Philippe II in 1190  remain.

Today, the beloved Grand Gallery of the Louvre looks much different than it did when it was the private domain of French royalty; what has not changed is the pleasure this space offers for strolling, chatting , and looking at art.  Skylights, added in the early 20th century, and repainted   walls in  white, open the space in a way that pleases modern eyes.   As usual, what our eyes accept as neutral depends on our experience. 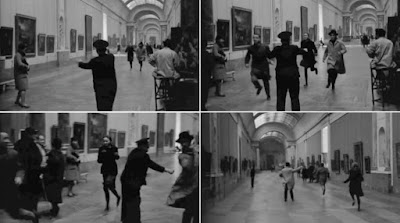 III.  The Louvre has  also had a career in the movies.
In his 1964 film Bande a Part Jean-Luc Godard sent his three protagonists (played by Anna Karina, Sam Fre, and Claude Brasseur) racing through the Louvre.  The reason, according to Godard,   “They read in France Soir that an  American tourist had run through the Louvre galleries in nine minutes and 45 seconds.  They decided to beat the record.  Thirty-seven years later the Italian director Bernardo Bertolucci repeated the stunt in The Dreamers.

Nicolas Philibert’s  documentary Louvre City (1990) happened almost by chance during the aforementioned grand realignment,   during which  the museum  was closed for renovations while I.M. Pei's giant glass pyramid was erected.  While Pei's pyramid was altering the courtyard and redirecting access to the museum in a typically Japanese fashion – that is to say by hiding the entrance – the interior galleries were being reorganized too.
His title Louvre City (La ville Louvre) is exactly right.  Shot over a period of five months, it takes shape as the narrative of a day in the life of a museum, rather like the 'city symphonies' that were  popular  in the 1920s.   Beginning before daybreak, the film moves through hallways and stairways by flashlight.  Things look much as we imagine they would when the visitors are gone, yet we may  wonder what  the Venus de Milo or the Nike of Samothrace mean when no one is there to look at them. 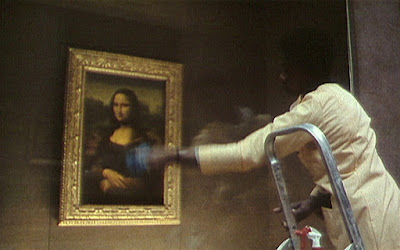 The 'city's is the twelve hundred people who work at the Louvre every day and not just curators, guards, and  preservationists.  Hard at work are locksmiths, acoustical engineers, physicians and chemists, cooks and even twenty firefighters on the staff. They treat their duties with great seriousness and also good humor.  Guards practice using fire extinguishers outside on a cold day and in their locker rooms trade opinions on the fashionable qualities  of their new uniforms.  That anyone learns to find their way through the labyrinth of corridors, especially in old and narrow underground levels,   is a source of wonder; the viewer wants to leave a trail of popcorn behind to mark way out.
Far from public view there are stacks and rows of paintings, sculptures and decorative objects - thousands of them.  The lucky ones are moved to restoration workshops and paint stores (yes the Louvre has one) where a gloved preservationist (yes, everyone seems to wear gloves at the museum) repairs a wooden renaissance picture frame with bits of gold leaf, applied one at a time.  Once the works are judged to be in presentable condition the work of positioning them in the freshly painted galleries begins.

Paintings are lined up on the floor for inspection by curators who pace the gallery,  a situation that looks a lot like the way we rearrange our living rooms, but these are priceless works of art.  Giant marble sculptures swing through the air on guy wires as though they were trapeze artists viewing the procedings.  In one gallery a  group of men confer about the best way to unroll a wall-filling  canvas while in another a group of men in suits work as one to hoist a painting that dwarfs them altogether.

At the end of the film and its revelations we may ask ourselves: is nothing sacred?   If the evidence of human history is any guide,   we can take ourselves just a little less seriously and then we may be able to approach works of art with a little more joy. 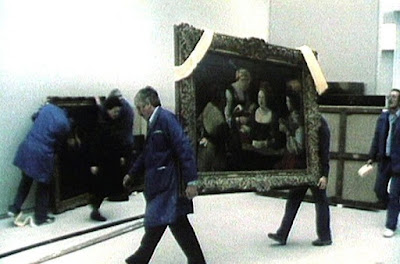