“Certain photographs, I no longer know which, but I remember the feeling, were born from a sudden turning around. As if a presence, in my back summoned me: it was a photo.”   - Bruno Réquillart, 1994. His name is unfamiliar to most in the English speaking world but Bruno Réquillart (b. 1947) is a much admired photographer in his native France; indeed his work has been likened to that of Jacques-Henri Lartigue.  Like Lartigue he has a knack for capturing candid moments in images that we have come to think of as being peculiarly French.  Also like his predecessor, Réquillart made the generous decision to donate his negatives, slides, and prints  to the nation in 1992. 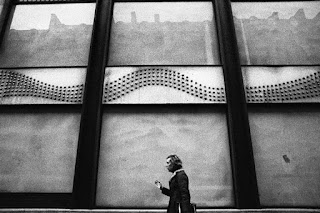 As a young man, Réquillart was studying graphic arts when he took up photography. His path was altered by the tumultuous events of the student movement of 1968, like that of so many of his contemporaries.  A popular slogan of the times - L'art est dans la rue (Art is in the streets) - is an apt description of  Réquillart's working method. 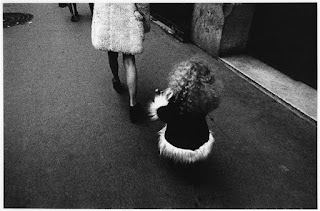 Savor the way the notches in the leaves of a discarded plant echo the markings on the pavement or how the knotted curtains that decorate a window are like the knotted chignon  hairdo of the woman who has paused before the window.  For some of  these pictures, like L'homme sans tete (Man without a head), the title is the least of it; we want to know if the photographer ever found out what the shirtless man was doing on that roof. 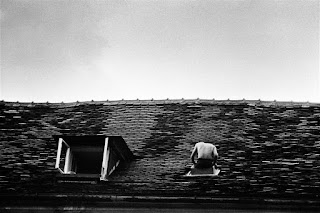 How did Réquillart develop such a sharp eye, how did he learn to capture fleeting moments?  Early in his career he had the formative experience of working with Maurice Béjart and his Ballet of the 20th Century.  For three years Réquillart photographed  dancers in performance, honing his ability to respond and even anticipate the perfect episodic moment. He then took the confidence born of that experience to begin photographing on his own.   Critics began to notice the impressive formal construction of his pictures and the way he used to it make fresh images of familiar French secular iconography. 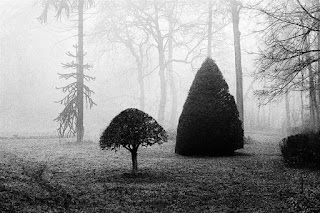 The challenge in making the series Versailles (1977) was to do do something diametrically opposed to the large project on dancers.  After such formidable predecessors as Eugène Atget and, more recently, Michael Kenna (Le Notre's Gardens, 1997), had explored similar territory through  static and seemingly timeless images,  Réquillart's lens makes the Sun King's gardens  appear as a child's fantasy of inanimate objects come to life - a lamp stand and an umbrella (L'if et la parapluie) 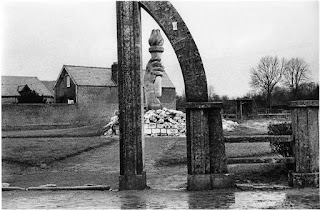 The following year, in 1978, Réquillart was given an exhibition at the Musee nationale de l'art moderne at the Pompidou Center.  Then, believing that he had done all that he could through photography, in 1981 Réquillart decided to try painting.  After two decades passed he returned to photography, this time using a panoramic camera. (see Place Michel-Audiard above, for example).
Réquillart's photographs, with their blend of realism and surprise,  belong to a genre associated with the magazine Réalités.  Founded in 1946 after the end of the German occupation of France, the magazine was known for publishing images that featured elements of surprise.  Surprise can work in both light-hearted and serious ways, and the magazine that covered both culture and economics with equal aplomb is still fondly remembered today.  Although it ceased publication in 1978, Connaissance des Arts continues its mission.

Posted by Jane Librizzi at 9:54 AM

These are amazing! Thank you for the introduction, Jane. Now I'm wondering what that man was doing on the roof.

Rouchswalwe, I think all that work Requillart did with the ballet really sharpened his skills. I've looked at them online but I don't have the right vocabulary to write about dance. He should be recognized in North America but I sometimes think there's a negative quota on French artists here; we already know so many of them! And you certainly have the eye and experience to appreciate them.