One of the great French artists of the twentieth century is Pierre Bonnard (1867-1947) whose work is well documented.  Why then are the paintings shown here  not more familiar? 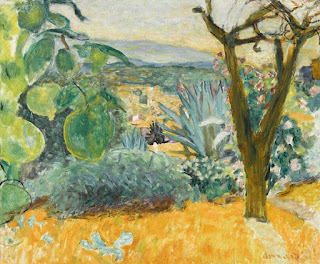 "As Delacroix wrote is his diary, 'One never paints violently enough.'  In the light experienced in the south of France, everything sparkles and the whole painting vibrates.   Take your picture to Paris: the blues turn to grey....Therefore one thing is necessary in painting: heightening the tone."  -  Pierre Bonnard, translated from the French  by Julian Bell

Typically, in a  Bonnard landscape vegetation functions as a frame that separates what is far from what is near.  From his perch the lush, variously colored plants form a kind of tapestry  laid out before the viewer;  when figures appear against such a backdrop they are often the last things we notice. 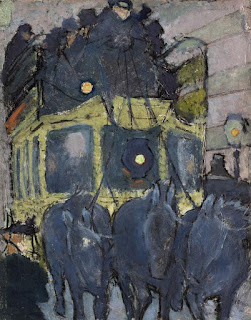 The answer begins with Georges Bemberg (1915-2011),   the very model of  a cosmopolite, twentieth century edtion.  Born into a wealthy  family in Argentina, Bemberg grew up in France and graduated from Harvard University.  He was a pianist, who also wrote  novels, for instance  Quatre mains: nouvelles (Four Hands: Novellas) published in 1953, but his true profession seems to have been that of a traveling art collector.  Bemberg, like Barnes, created a foundation to share his collection with the public, hitting on the happy solution of collaborating with the city of Toulouse, owner of the Hotel Assezat, a sixteenth century building in the Renaissance style, nicely suited to be re-purposed as a museum.   It was built (c. 1555) as a hotel  particulier, the French term for  a palace owned by wealthy non-royalty, in this case the manufacturer Pierre Assezat.    The Fondation  Bemberg opened to the public in 1994, with paintings, sculpture, furniture, and antiquarian books from five centuries but it is the modern French art that is it greatest attraction. 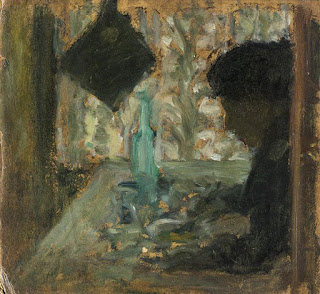 Critics have long chewed over the question “Was Bonnard an easel painter or a decorative painter?”  The artist managed to have it both ways.  In Bonnard’s later paintings, color is the measure of sensation; lines, especially those used to frame an image are the anchor  as the artist attempts to capture on canvas what the constantly moving human eye sees.  Marthe, Bonnard's long-time mistress and then wife, appears seated at a table; she is bracketed doubly, by a window in the background at her left and by a strip of matching color, of undetermined function to her right. (see above)    Even in a still life such as Nature morte aux citrons the strong lines are predominately vertical.  (see below) 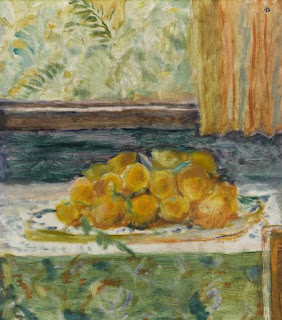 By now, you can probably place the locale in Bonnard's paintings by referring to his observations about coloration.


When Bonnard began his sojourns  on the Cote d’Azur he was a seasoned traveler, visiting   Spain in 1901, then  Algeria, and Tunisia in 1908,  and, most importantly,  two months at  Saint-Tropez during the summer of 1909. So  it is romanticizing his story to suggest that the south of France provided a revelation to the artist; more likely  it concentrated his stored reactions to those previous experiences. Still, in  a letter to his mother, he described it as  an “ ‘Arabian Nights experience’, dazzled by “the sea, yellow walls, and reflections as colorful as the lights themselves.”  Pierre and Marthe  began to make yearly visits, staying at  Saint-Tropez, Grasse, Antibes, and ultimately at Le Cannet where Bonnard bought a house in 1926. 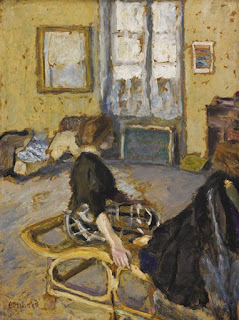 At about the same time, Bonnard bought a little house on stilts at Vernonnet on the Seine in 1912, a house he called Ma Roulette (My Caravan).   Although the climates of north and south differ, what connects Ma Roulette and Le Cannet is that both studios perched on summits overlooking their surroundings.  Did Bonnard chose to live in studios that recreated the frames that he had worked within  on  his murals and decorative wall panels in the 1890s?


According to his nephew Charles Terrasse, Bonnard’s  forties were “the years of anguish” for the artist.   He responded to the new cubist art with a sense of inadequacy, questioning whether his own had reached a dead end.  Picasso dismissed Bonnard’s work as insipid where Matisse, the more discerning, corrected him: “Bonnard is a great artist for our time and for posterity.”  Matisse even considered Bonnard's work to be superior to his own and his estimate has been seconded by artists as different as Ellsworth Kelly and Fairfield Porter, who believed that Bonnard was the artist who laid out a path between representation and abstraction.
Both these paintings of Marthe are less emotionally diffiuclt to read, if only for the prosaic reason that, being fully clothed, she seems more in possession of herself. 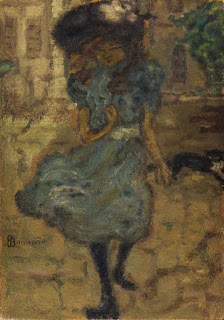 Bonnard always shows his most uncomplicated emotions in his pictures of children and, when his pets enter the picture, they steal the show.  Bonnard painted The Little Girl With a Cat in 1894, the same year that he painted the more familiar White Cat (in the collection of the Musee d'Orsay) and their similarities are remarkable.   In both, Bonnard uses distortion to suggest humor and  curving lines to create a sense of motion.  Whatever the highs and lows of his personal life, Bonnard was always capable of painting joy.


Sadly, for Bonnard the painter, his  forties were “the years of anguish” , according to his nephew Charles Terrasse,  He responded to the new cubist art with a sense of inadequacy, questioning whether his own had reached a dead end.  Picasso dismissed Bonnard’s work as insipid where Matisse, the more discerning, corrected him: “Bonnard is a great artist for our time and for posterity.”  Matisse even considered Bonnard's work to be superior to his own and his estimate has been seconded by artists as different as Ellsworth Kelly and Fairfield Porter, who believed that Bonnard was the artist who laid out a path between representation and abstraction 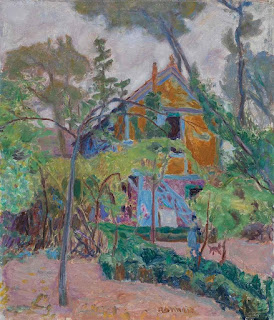 Posted by Jane Librizzi at 1:12 PM

Bonnard was born, raised and educated in Paris. So why did he live/visit in the Cote d’Azur, Spain and North Africa? To get away from the capital city's rush, noise, dirt and miserable weather, I am assuming. But there must have also been an element of keeping up to date with his contemporaries. Paul Cézanne was in Aix, Henri Matisse and Pablo Picasso were in/near Antibes, Paul Signac was in Saint Tropez etc etc. The colours were brilliant and the social life must have been active.

Hels, Bonnard didn't live in any country but France, although his comfortable background certainly allowed for as much travel as he wanted. He was also able to maintain two homes in different parts of the country. In brief, he had the luxury of choice and, although it didn't seem to have a place in this article, he had affairs with women other than Marthe and long-running friendships with other painters. At times, Bonnard had his doubts but, among his circle, he was one of the lucky ones, I think.

enjoyed reading your post and the images of Bonnards paintings. I love his work.

Sally, Fondation Bemberg includes quite a collection of art from Bonnard's contemporaries along with the thirty-some works of his. Also a strength of the collection is paintings from the Venetian Republic. Most of the books I looked into haven't caught up with the collection going public, even though it's been that way for two decades. Thanks for your kind words.