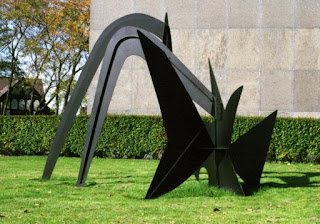 This is the scene across the street from the Mohawk Valley Refugee Resettlement Center.   You can see a bit of the Tudor-style Art School (once upon a time it used to be a stable) at the left, behind  a corner of the Munson-Willaims-Proctor Art Institute; in the is foreground Alexander Calder's Three Arches, a representation of the museum's three founding families, installed three years after Philip Johnson's Museum building opened in 1960.

Sculpture is arguably the closest medium to the human in all of art.   At the center of Philip Johnson's museum design is a large two story sculpture court beneath a skylight.  I find this suggestive of a deeper meaning than the arbitrary creation of space, especially when thinking about what happened to European museums during World War II.   Paris, Rome, Cologne, all cities whose museums evacuated their artworks, as much as possible, to safe havens in the countryside, away from bombs and pillage.  Take the Louvre, where thousands of paintings were removed from their frames and hidden in old stone castles, leaving behind shadows on gallery walls and frames littering the floors.  What was left were sculptures, too large or too heavy to move,  ghostly witnesses in waiting.  And sculpture survived the depredations of time, giving us a window into ancient societies.  Even the city's name - Utica - is the namesake survivor of a Phoenician  colony on the north shore of Africa that no longer exists. 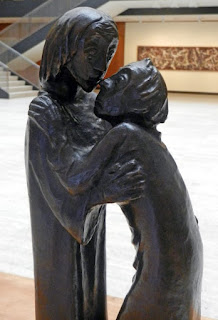 Viewed from any angle, Meeting Again by Ernst Barlach is a moment in history.  Two  figures raise each other up as they embrace,  the power of their mutual gaze levitates them, we feel, the wounds of time and separation painfully present in their reunion.  In Barlach's works there are  elements of the figures that line the walls of Gothic cathedrals, elongated and stark, yet expressive.
Ernst Barlach (1870-1938) was  the outstanding German Expressionist sculptor between the two world wars.  He could make bronze take on the rough hand-worked quality of  old wooden  figures.   Barlach was widely admired in the 1920s but, in  the 1930s,  his works were confiscated by the authorities and removed from museums, his figures rightly understood as reminders of the dire consequences of war and, so, dangerous to the Nazi cause.   As an infantryman during World War I, Barlach had been sickened by what he saw in the trenches; he spent the rest of his life embodying  his terrible knowledge in  figures of powerful emotion and when he could no longer  sculpt, he turned to making prints. 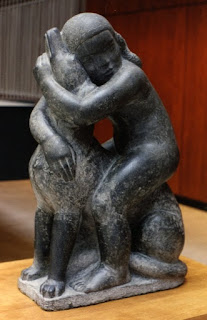 Another embrace,  Affection, is  one of the most loved pieces in the Munson-Williams-Proctor collection, and the sculpture court always seems empty when it is put away.   The girl and the dog lean into each other with a shared bliss that is evanescent; by the time we understand such emotion, it has gone.  That it is exactly life-size makes its effect that much more poignant.  Through Zorach's touch, black marble appears to breathe; its sleekness owes something in style to Art Deco but its effect is embraceable, though not allowed by the amiable guards. For the Lithuanian-born American William  Zorach (1887-1966), sculpture was a language like music or speech, to be used for "the things one does in seeking for the inner rhythms  of nature and life." - excerpt from  Art Is My Life by William Zorach, 1967, p.167.

Like the city of  Utica, the Munson-Williams-Proctor Art Institute welcomes everyone.  And, unlike other major museums in the Northeast, you don't need $ to walk through its doors.

Some of the works here feel like my friends.