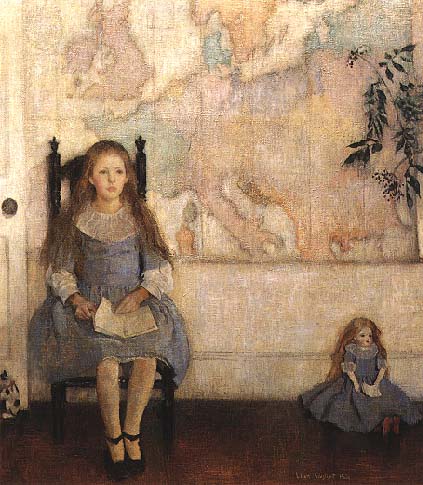 "Qui vivra, verra."  If you live, you'll see.  An apt epigraph for the career of American author Nancy Hale.

Nancy Hale was eleven years old when her mother painted her portrait. Immediately I first saw Nancy and the Map of Europe I was reminded of Jan Vermeer's Allegory of Painting (1666).  Both girls wear blue dresses, sit before softly tinted maps hanging on walls behind them, and both are possessed of the serious sweetness that attends the threshold of adulthood. The laurels that garland the girl's head in Vermeer's painting are echoed by the fronds of an unseen plant leaning into the upper right corner of Hale's.  The little doll wearing an identical dress also has a book in her hands; both girl and doll interrupted at their reading. It is as though the artist could foresee her daughter's future career.  Suggestively, the door at the left edge of the picture is propped open, an indication of the life to come?  We know from Nancy Hale's memoir Life in the Studio (1969) that she hated being a conscript of a model but that doesn't dim the pleasure of discovering this picture.

Lilian Westcott Hale, the artist, has faded from the story of art, unjustly, I think and so, after her, has her daughter, the writer Nancy Hale, with even less justice.  Now thanks to the Library of America and editor Lauren Groff (Fates and Furies) we have twenty-five Nancy Hale stories in Where the Light Falls again in print.

About her stories, Nancy Hale wrote in her memoir A New England Childhood (1958), " My pieces,,, are intended less about the real and ascertainable past than about the memory of it, and memory as a mode of thinking tends to burst spontaneously into fantasy at very turn."  Women puzzled her, Hale admitted and so we may read her stories as detective fiction of a kind.

The first story, "The Earliest Dreams" fittingly, is about a little girl lying in bed at night ("suspended in a dark tower above the world") listening to the adults downstairs "( They were all laughing in the drawing-room below.  You were wondering what they were laughing at, that made the laughter so wise, so gay, so confident and foreign.  You never knew what they laughed at when they laughed at when they laughed so long in the evenings, and now you will never know.")  Contemporary writers like Lorrie Moore are not, after all, the first to use a breathless second person voice.

In the second story, also from 1934, "The Double House, " Robert is a little boy who lives with his widowed father and his Aunt Esther in one half of a double house. (" Robert used to think, as he came home from school, how ugly the house looked, and how hopeless and sad.") It is the Depression and the family has little money. Yet Robert finds solace of a sort in the empty half- house;  his emotional equilibrium depends on his father. Shy and tentative with his schoolmates, the  boy is savagely ridiculed and even attacked when he brings a flower to science class that his father picked for him. ("School was  a sort of nightmare broken by little intervals of hope.")  One night when Father comes home late, Robert overhears his father crying.  And just like that, Robert's world collapses.

In prose elegant and sometimes slyly humorous, Hale tackled controversial subjects like racism, prejudice against immigrants, anti-Semitism in the early days of World War II, women as enforcers of the double standard against other women,  a woman's ambiguous and even rebellious feelings about motherhood.  "The Bubble" is remarkably frank about a woman's desire "to look nice again"  and to attract attention from men after having a baby. And this was written in 1954.  Five years later in "Flotsam" a babysitting grandmother, vain about her youthful looks ("No doubt many of these passerby mistook her for Marcus's mother."), is trailed by her obedient but literal minded grandson who insist on correcting those mistakes.  Equally zealous in a different way, a suburban woman's back yard bomb shelter becomes the emotional center of her life.

Nancy Hale (1908-1988) was born in Boston; both her mother, Lilian Westcott Hale and her father, Philip Leslie Hale (1865-1931) were artists. Like her mother before her, Nancy Hale studied at the Boston Museum School Fine Arts.  Although she soon turned to writing, Hale published a biography of the painter Mary Cassatt in 1975.  She married her first husband in 1928 and the couple moved to New Yotk City where Nancy got a job at Vogue.  She also freelanced short stories to magazines, including the New Yorker.   Her book editor at Scribner's was Maxwell Perkins, who discovered F. Scott Fitzgerald, Ernest Hemingway, and Thomas Wolfe.  Indeed, Hale's stories of debutantes, college dances, and fast cars, drawn from her youth will evoke shades of Fitzgerald for many readers, although Hale's viewpoint is bemused and detached, not idolatrous.  She published a biography of the artist Mary Cassatt in 1975 and some critics took exception to her focus on the obstacles  faced by a female artist in the 19th century but  no one could question the depth of her research; she had learned  it from her parents.  Although she would go on to publish seven novels, her métier was the story. Divorced and remarried in 1936, Hale moved to Charlottesville, Virginia. After her second marriage ended in divorce, Hale had a nervous breakdown; her third marriage in 1942 lasted until Hale's death.

Lilian Westcott Hale (1880-1963) studied with William Merritt Chase at his Shinnecock Hills Summer Art School on  Long Island and then at the Boston Museum School of Fine Arts with Edmund Tarbell.  In 1902 she married a fellow artist, Philip Leslie Hale and the couple settled in Dedham, Massachusetts.  Their daughter Nancy was born in 1908.  Her portraits were much admired by critics and she won an award from the National Academy of Design in 1927.

Jane, I love this blog. Just found it! I hope to see you at the museum soon, Rina

Welcome, cpomodoro. Thanks for the kind words. I try to find out-of-the-way things that deserve this little spotlight of mine. Fope to hear from you again.

I can’t find a French translation of this novelist, too bad. A very nice post about picture and stories, thank you, Jane.

Tania, thanks for letting me know about this. Interesting. I wonder if her books were translated into French dureing her lifetime.