An Artist of the SIlver Age: Anna Ostroumova-Lebedeva 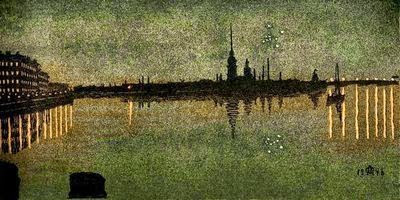 "How much has been said and written about the White Nights. How they were hated by those who could not get used to them, and how passionately they were loved by others....." - Alexandre Benois

How the northernmost capitol city in the world, bathed in pale light when not shrouded in total  winter darkness, became a city of light-worshiping artists is a story told in silver. From 1890 to 1920 St. Petersburg, Russia was the center of the Russian art world during a period that came to known as the Silver Age. It was also a time of tremendous social and political upheavals. 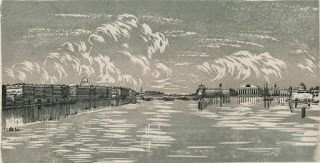 "Never has classical architecture had so much space to breathe." - Joseph Brodsky from "The Child of Civilization" in Poems and Essays.

St. Petersburg exists because Peter the Great wanted a better seaport than the one he had inherited from his predecessors. The site of a former Swedish fortress on the Baltic Sea was too attractive to pass up so, in 1703, a new city arose on infilled marshland, built by Russian peasants and Swedish prisoners. After Czar Alexabder II abolished serfdom in 1861, a new wave of peasants, thid time vollunarily, poured into the city in search of work. But marshland is an unhealthy place for people to live and the city was never built to support a large population. Without  much of a middle class, St. Petersburg was majestic buildings surrounded by  a sea of human misery.  It remained the capitol of Russia until the Bolsheviks moved the government seat  to Moscow in 1918. The city is home to the Hermitage Museum founded in 1764 and the second largest museum in the world. 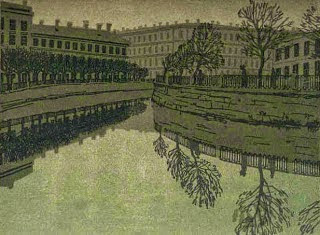 St. Petersburg's majestic buildings cluster around the Neva River and a series of canals.  Devastating fire. common in the 18th century, destroyed the city's wooden structures but from the ashes came  enlightened urban planning, thanks to Russia's female monarchs, Anna, Elizabeth and Catherine the Great. Pink marble from nearby quarries in Finland was used to reinforce the canal embankments and ice cream colored stucco buildings cast a warm glow on the watery reflections of  the gray northern light.

Bored by realism and enchanted by the artifice of  western Symbolism, Russian artists of the 1890s were ready for the next new thing. That is how St. Petersburg became a magnet for artists not lucky enough to be have been born there.  Sergei Prokofiev left Moscow to study at the St. Petersburg  Conservatory where he debuted the experimental composition Sarcasms in 1912.  Another Muscovite, Alexander Scriabin made his debut as a pianist in the city, later  proclaiming that his music heralded the coming of the apocalypse.  The new had arrived. 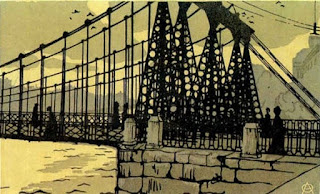 Mir Iskusstva (World of Art) was the magazine that inspired a movement. Artists yearned to reclaim the formal and technical rigor that seemed lost in the laxity of late 19th century Russian art. Its members dubbed themselves the miriskusniki. They excelled in art forms that required extraordinary concentration. The founding members of the  World of Art group included Sergei Diaghilev, Alexandre Benois, Leon Bakst, and Konstantin Somov. Their philosophy  was summed up by Benois  as "not this, not that or the other in isolation, but everything together."


Benois had returned to his native city to take  the directorship of the Mariinsky Theater,  home of the Imperial Ballet. Paris had been exciting but Russian ballet was about to set fire to the stage thanks, in large part, to the efforts of Diaghilev and Bakst and to Benois,  their librettist and set designer. Sergei Makovsky would declare with good reason in 1910, "Over the last ten years Russian art has done the work of a whole generation."

A newcomer to Mir Iskusskva, Anna Ostroumovaa-Lebedeva (1871-1955)  was a loyal resident of her native city, throughout  the  name changes decreed by successive regimes. Born in St. Petersburg  which became Petrograd after the 1917 Revolution, she died in Leningrad in 1955. On May 4, 1901,  When students demonstrating at  the Kazan Cathedral had been beaten and some even killed by the Tsar's police in 1901, Ostroumova-Lebedeva took to bed for two days with what she described as a mental breakdown.  Whatever her inner turmoil, it never surfaced in her art. When the riots of the 1905 Revolution were brutally suppressed by the Tsar, life in Russia seemed to take on the more horrific aspects of the Symbolist vision. Nevertheless, that same year Anna married Sergei Lebedev, a chemist.

If St. Petersburg was Russia's window to Europe, it opened onto Paris.  Shortly after arriving in Paris, Ostroumova-Lebedeva and Alexandre Benois met at the home of their mutual friend Konstantin Somov. Ostroumova and Somov were both students of James McNeill Whistler.  An erratic teacher at best, Whistler had implored Ostroumova to accompany him to America for further study although he had initially dismissed her contemptuously: "But you can do nothing, you know nothing, I can't teach you!"  In her memoirs, Ostroumova-Lebedeva recalled his unorthodox teaching methods.  "Many things surprised me or even seemed quite funny to me: the complete lack of freedom or any independence and the absolute to all rules insisted on by Whistler." In addition, "To mix colors on a palette one had to use a special  method insisted on by Whistler and if you try to d it your own way your neighbors grab hold of your hands because they watch you the whole time."

For Ostroumova, the impetus to study in Paris was partly practical.  "My father has told us many times, that he will not be able to support us in the future, that he will give us a good education, and that we will have to earn our living."  While Anna chose art, her sister Sonia chose chemistry. From 1900 until the October Revolution Anna traveled frequently around Europe. At home she participated in the Community of St. Eugenia, a group that funded the building of hospitals, trained nurses, and sheltered the poor.  It was disbanded by the Communist Part in 1920 on the ground that charity was no longer needed in a workers' state. 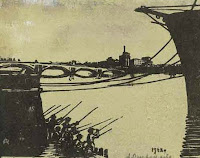 Ostroumova-Lebedeva  pioneered the use of the woodcut print in Russian art.  Her cityscapes of old St. Petersburg are much admired for their architectural elegance; I am intrigued by her attention to the developing industrial aspects of the modern metropolis, a subject that was derided by her fellow miriskusniki.  Leningrad Fishing Boys (at left) shows a group of little boys dwarfed by a warship in 1942. Among other accomplishments, she reinvigorated the medium of engraving and introduced her countrymen to Japanese prints. Like Benois, she put painting aside in favor of other media.

From 1918 to 1922 Ostroumova-Lebedeva taught at the Institute of Photography and, after 1934, at the Russian Academy of Fine Arts.  In the meantime, Benois had become a curator of paintings at the Hermitage Museum; while there he published a monograph on Ostroumova-Lebedva's work. But Benois left definitively for Paris in 1927.  Ostroumova-Lebedeva  lived through the  872 day Siege of Leningrad during World War II, continuing to record the life of her beloved city. Her images of boys fishing near a warship or bridges under construction reveal her interest in photography. Sadly, she became blind soon after her wartime ordeal, possibly due to its severe deprivations.  She died on May 5, 1955.

Read about The Other St. Petersburg

Images: Anna Ostroumova-Lebedeva, State Museum of St. Petersburg, Russia, except as noted
1. View of the Fortress at Night from The Leningrad Series,1946
2. View of the Neva River and the Stock Exchange from the Trinity Bridge, 1912
3. The Ekatarina Canal, 1910
4. St. Petersburg Chain Bridge, 1903
5. Filipp Maliavin - Portrait of Anna Ostroumova, 1896, oil on canvas
6. Leningrad Fishing Boys, 1942
Posted by Jane Librizzi at 10:04 AM

I didn’t even know her name. Thank you, Jane, for this artist’s life and these views of a city visited with happiness at the beginning of this century.

Tania, you are welcome. How lucky for you to visit St. Petersburg. My husband went there on a "study abroad" trip. The Hermitage was spectacular, he told me,