"(A) mirror of the soul, and the depths that are divined below the surface join forces with the world above in a shared secret: neither the depths of the water nor those of the soul are ever to be plumbed." — Andrea Domesle 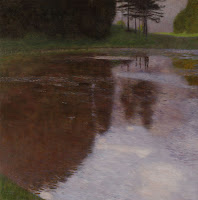 Fernand Khnopff's Still Water. Fosset   was shown at the First Vienna Secession in 1898. At the urging of Gustave Klimt, it was purchased by the Belvedere Museum.  A panoramic view and an unusually large work for Khnopff, it depicts mostly unseen trees and a bright strip of sky visible only as they are mirrored in  water. It owes its brooding quality as much to Khnopff's eccentric cropping of the image as it does to the muted colors Khnopff used.  At age sixteen  Khnopff had made his first sketches from nature at his family’s summer home in Fosset, a hamlet in the Ardennes of eastern Belgium.  “Pas voir du ciel” he wrote on one, meaning roughly 'do not show the sky'.   In later years Khnopff always insisted that he had his reasons for the  unusual shapes of his paintings although, as mystification was a favorite strategy, he offered no explanations. 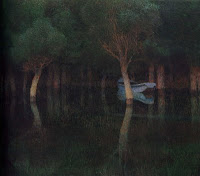 The impression this painting made on its early viewers cannot be overestimated.  In short order Gustave Klimt painted Still Pond (1899 - Leopold Museum-Vienna) in tribute; it is not one of his better works. Twilight by the underexamined Austrian painter Carl Moll is a worthy emulation; its invisible waterline draws the eye inward as its wavering tree trunks and a wraith-like presence defies any realistic expectations.  A fellow Belgian, Anna de Weert (1867-1950), came close in color and spirit with Canal In Ghent.

To understand the impact of Still Water. Fosset, it helps to remember the ambivalence built into symbols in 19th century art.  Water functions as a horizontal axis, positive in supporting life but when it acts as a mirror it takes on the vertical, with an implicit sense of drowning or at least absorbing what it reflects.  For  its original viewers, the still waters of Fosset were more than a static landscape.  They suggested the instability of nature and, by extension, of modern life.  Some of them doubtless had also  read Stephane Mallarme's Herodiade (1887),in which the French Symbolist poet had written:
"By the power of old silence and deepening gloom,/ Fated, monotonous, vanquished, undone,/ Like the sluggish waters of an ancient pond."