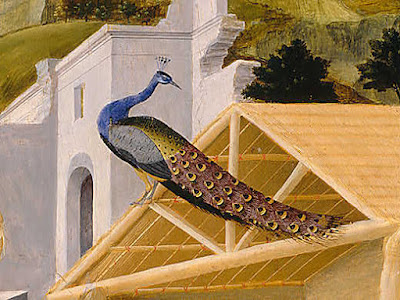 "The window looked out onto a pattern never-ending
A flower and trees and little pathways far descending
To the garden far below us, the pavilions in the sunlight
Where the peacocks proudly grace the scene.

The vision, a timeless place, another way of living
You moved in so close I really thought that you were giving
I allowed myself a moment to believe that you could meet me
To reflect upon what might have been.

The summer sky I saw reflected in the colour of your eyes
But somehow I could never peel away the layers of disguise
I'm drowning now, I'm slowly sinking in a sea of blue and green
Where what you are is never seen.  How can anybody know you?

I still hear the ringing of the church bells in the morning
The peacocks still call out their sad and bitter warning
Talk a final look around you.  Hold the memory forever.
Find a quiet place inside where you can listen to what your heart is saying
Beauty's only an illusion.  Here your truth is an intrusion.
A mirage is all it's ever been."
- A Timeless Place, lyrics by Norma Winstone

If you bear with me on this circuitous route from New York to Paris and back again,  I may be able to convince you that a jazz tune is an art song. Words can't make you hear the music, but if these words get you to listen to the music, that's fine with me.

From its original title, The Peacocks, you can almost hear the virtuoso flutter-stopping of Stan Getz on tenor saxophone that awed the tune's early audiences.   But you don't have to, because there is a recording of a concert in Antwerp, Belgium from August,  1974.    Getz and pianist Bill Evans had worked together a decade earlier and, having enough time pass to finesse their differences, the two musicians were touring Europe with recording engineers in tow.  Zoot Sims once described Getz as " a nice bunch of guys" in reference to Stan's unpredictability.   August 16th was also the 44th birthday of the heroin-addicted Evans, who often beat the arm he had just shot up in against the piano to restore his circulation before playing.  That they made the first recording of The Peacocks in Belgium, where Adolphe Sax had invented the saxophone seems like some kind of poetic justice.  Through the applause that follows, you can hear Stan Getz say "Happy birthday, Bill."


But the recording was not released and, the next year, to thank composer Jimmy Rowles for giving  The Peacocks to him, Getz paired with Rowles for an album Stan Getz Introduces Jimmy Rowles: The Peacocks, with Rowles at the piano instead of Bill Evans.  Like Getz and Evans, Jimmy Rowles (1918-1996) had his musical roots in bebop.  Rowles, who worked as an accompanist for Billie Holiday and later taught Diana Krall, was admired as an uncommon harmonist at the keyboard.  Bebop also made Rowles' elegant composition possible. Musicians had used the technique of breaking apart and reshuffling familiar chord sequences, (e.g. I IV V became I VI II V) to reinvent classic popular tunes (A A B A).  Reading the lyrics of A Timeless Place (1994) by Norma Winstone  (see above) you know you are looking at the traces of a complex musical form. 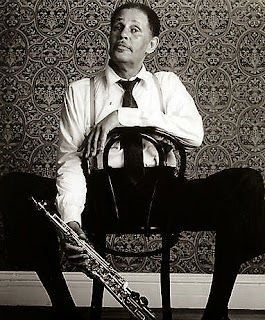 Before that happened,  another tenor saxophonist entered the story.  Dexter Gordon (1923-1990) was known as a baffling improvisor even in bebop circles.  Like several others, Gordon's heroin habit landed him in jail (in 1952) and led to the loss of his cabaret license.  (The cabaret license, in force from 1940 to 1967, was intended to exclude persons of "bad character" from performing on licensed premises.  In practice, it prevented many musicians from earning a living and its impact on black musicians was horrendous.)  Although Gordon went clean and began recording again for Blue Note Records, he wss unable to get work in New York clubs so he moved to Europe in 1962.  By the time he returned to New York in 1976, things had changed enough that his music was greeted ecstatically but, his health failing, Gordon's performing days were dwindling.

So that's where Bertrand Tavernier (b. 1941) found Gordon in 1984.  The French filmmaker persuaded Gordon who had never acted, to take the part of Dale Turner, an exiled American jazz musician in 1950s Paris.  The film would be called 'Round Midnight.  In it, Turner is a man struggling to control his alcohol consumption  enough to keep making music, away from his drug-taking friends back in New York City.  Tavernier was determined to cast real jazz musicians playing the other characters, including Ron Carter (bass), Freddie Hubbard (trumpet), Billy Higgins(drums), Bobby Hutcherson (vubes), Bobby McFerrin, Cedar Walton (piano) and Tony Williams (percussion).  Tavernier, as you have guessed by by now, was an ardent jazz fan; he even knew that the  actress Lonette McKee was also a fine singer and her performance of  Gershwin's How long Has this Been Going On? is a highlight among highlights. Herbie Hancock, who appeared in the movie and composed the score., knew to included  The Peacocks. 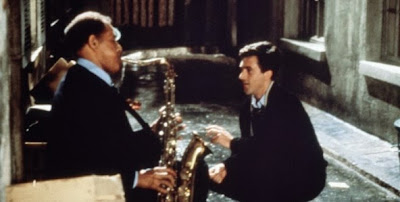 "When you explore beautiful things every night, the most beautiful can be painful."  - Dale Turner

For the character of Dale Turner, Tavernier and his screenwriting partner David Rayfiel drew on the lives of saxophonist Lester Young  and pianist Bud Powell. In that same scene in the alley (photo above), Turner explains to his young friend Francis that, like his mentor Lester Young, he needs the words ("I can't remember the words") so that he can make them speak through his instrument.  Both Young and Powell had problems with alcohol, with  Young basically drinking himself to death a few months before his 50th birthday in 1959.   Powell was in and out of psychiatric hospitals for years before dying of tuberculosis at age 41 in 1966. Powell had played piano on the first recording of Thelonius Monk's composition 'Round Midnight in 1944, as Tavernier surely knew.  Tavernier was aware of Gordon's substance problems, of Lester Young's role as Gordon's friend and mentor, and of Gordon's love affair with Young's confidante, Billie Holiday.  In a bittersweet touch, the  character of Turner addresses everyone as Lady, Holiday's nickname.  "Well, Lady Sweets, are you ready for tonight?" Turner asks his saxophone before giving an ineffable performance of Body And Soul.  All the music in the film was was recorded live on the set.

"I dreamed you came to Paris." - Dale Turner to Miss Darcy Leigh

Gordon's performance is believable and touching, conveying emotion with minimal drama; when he stares off into space you really want to know what he sees as he speaks in  slow, husky tones.  His scenes with Francis's young daughter Berangere are courtly and gentle, as Turner expresses a tenderness we learn that he has failed to give to hiw own daughter Chan.   When Turner and "Miss Darcy Leigh" (the Billie Holiday figure) played by Lonette McKee duet on George Gershwin's How Long has This Been Going On? my heart melts every time. Gordon was nominated for an Oscar  as Best Actor for this performance.  Herbie Hancock won the Oscar for Best Film Score, his noir-ish composition Chan's Song/ Never Said, with sublime wordless vocals by Bobby McFerrin, overshadowed just slightly by the one he rescued - The Peacocks.

The music, the movie:
A Timeless Place appears on Unsung Heroes by Tierney Sutton, Telarc Records: 2000. (Sutton owns this song now, to my ears.)
The Peacocks appears on Bill Evans & Stan Getz: Live In Belgium, Milestone Records: 1974 not released until 1995. (You can hear it on YouTube)
Stan Getz & Jimmy Rowles, The Peacocks, Koch Jazz, 1975
Dexter Gordon appears in Round Midnight (Autour de minuit), directed by Bertrand Tavernier, Warner Brothers: 1985, now  on DVD. (Several musical performances from the film are also available through YouTube).

Great version of the lyrics by Jazzmeia Horn on her new album, A Social Call.

Lester Young called other musicians "Lady," regardless of gender.

Really nice post - thanks so much for posting the lyrics!

Hello, E2c. I can't say enough good about this movie. As for the music, the soundtrack is (one of) my favorite(s). It's way up there with the Jerry Goldsmith score for "Chinatown."
I look forward to hearing the recording you recommend. Funny thing, though, when Jimmy Rowles recorded "The Peacocks" as an instrumental, with himself on piano in 1975 (?), although it was his composition it took a saxophone to reveal just how gorgeous the melody is.

Mark Murphy recorded in 1999 a superb version with Norma Winstone's lyrics. It's on his album/CD 'Some Time Ago'. For mine it's the only vocal version that shades the original itself.

Shane, welcome, and yes, another fine version of a difficult song. Although it doesn't sound difficult in the hands of remarkable singers. Thanks for alerting me to Mark Murphy's version.
I notice that some of Norma Winstone's recordings from the 1990s have recently been reissued in the U.S.