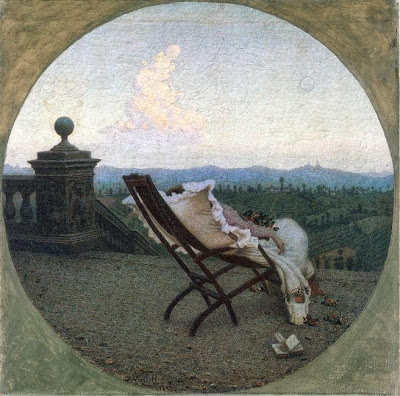 "Esterina, your twentieth year now threatens,
a cloud of greyish pink
that day by day enswathes you.
You know and you're not afraid.'
- excerpt  Falsetto (1924) by Eugenio Montale


"Rejoice when the breeze that enters the orchard
brings you back the tidal rush of life:
here, where dead memories
mesh and founder,
was no garden, but a reliquary.
...
Find a break in the meshes of the net
that tightens around us, leap out, flee!"
- excerpt from  In limine  or At the Threshold (1924) by Eugenio Montale


I.  Esterina Rossi was eighteen years old in 1924 when a shy young poet  admired her from a distance. Two year before that Eugenio Montale had published I Limoni (The Lemon Trees), one of his first published efforts, in which he declared his break with the conventional Italian poets of his day, the laurel-clad ones  who “stroll only among the shrubs”.  Ouch.  There are thorns in those shrubs.

Eugenio Montale (1896-1981) was the son of a well-to-do chemical traders. He was born in Liguria, the region south of the Piedmont on the Gulf of Genoa.  Liguria had been part of the Kingdom of Sardinia before the Italian unification of 1861.   Montale showed an early interest in music; he studied opera singing in his native city of Genoa.  His poetry, for which he received the Nobel Literature Prize in 1975, has excited a variety of responses.  Joseph Brodsky described Montale’s as the “voice of a man speaking – often muttering  - to himself” while more recently Jonathan Galassi, who has spent years translating the collected poems of the great 19th century Italian poet Giacomo Leopardi, has placed Montale as his 20th century counterpart.

Dolce far niente or fare niente is an expression that comes from Latin; the phrase expresses 'the sweetness of doing nothing at all.'  To savor idleness, to let the mind wander, becomes an occupation itself.  According to Merriam-Webster, its first known use occurred in 1814.  This can't be the whole story though, as the term appears in a letter from Madame de Sevigne to her daughter Francoise in 1676,

“Don't worry at all about my stay here; I feel perfectly well; I live here in my own fashion; I stroll  frequently; I read, I have nothing to do, and although in no way lazy by occupation,no more is affected than me by the farniente of the Italians.”    - Marie de Rabutin in a letter to her daughter Francoise, Madame de Grignan, dated  September 16, 1676.

Madame de Sevigne (1626-1696) was anything but an obscure French noblewoman writing from her rural seat,  famous throughout Europe  for her poetry and her extensive correspondence in which she delivered devastatingly frank commentary on the court of the Sun King.  Les Rochers, a massive chateau at Vitre in Brittany, was no  backwater for a woman who understood the sweetness of doing nothing better than she practiced it.


II.  We can detect hints of those pink clouds in S'Avanza or Twilight by the painter Angelo Morbelli.  Morbelli (1853-1919) was one of the painters gathered under the umbrella label of Divisionists but that is the least of their interests for us today.  Their theories about vision were likely to become outdated, and they have.  Their accomplishments in making art with a conscience are still exemplary.

It enriches our appreciation of their work to know something of the context in which these artists painted.  In the new nation of Italy about one in twenty spoke what we now consider the Italian language.  The literary language in which educated people read the classic writers – Petrarch, Dante, Boccaccio – was Tuscan.


Angelo Morbelli (1853-1919) was born into a family of wealthy winegrowers. in the Piedmonte region, part of the Kingdom of Sardinia before national unification.  As a student at the Accademia di Brera he met other young artists like Giovanni Segantini and Emilio Longoni,  fellow northerners but from very different backgrounds  Segantini was orphaned at the age of eight, then sent to live with relatives in Milan but was abandoned several times.  Longoni came to Milan as a young man in search of a trade.  These artists of the first self-consciously Italian generation, based in the north were witnesses to the upheavals of industrialization and the poverty that was exacerbated by mass migration from the countryside to the cities.  In their paintings  themes of social conscience and aesthetics are blended in a way that diverges from the more familiar  images of bourgeois leisure painted by their French counterparts. Morbelli often painted images of loneliness and isolation; his Dawn and Twlight were intended to be paired – the mother and chld already out at the crack of daylight and the young woman fallen asleep over her book.    For Morbelli, the bridge from aesthetics to ethics may have been his early deafness; it deprived him of his chosen field of music and he turned to the study of art.

Morbelli may have painted S'Avanza at La Colma, a country house owned by his family at Casale Monferrato in Piedmont.   Along with leisure to read the latest books on physics, chemistry and optics, Morbelli sought out the highest quality paints and varnishes.   He had his favorite pigments -  zinc white, cobalt blue, cadmium yellow, and cerulean blue  - specially made to guarantee permanence, often imported from England.   What we know for certain is that Morbelli wanted viewers to hold two images in mind: the pleasures of far niente and those who labored far from it. 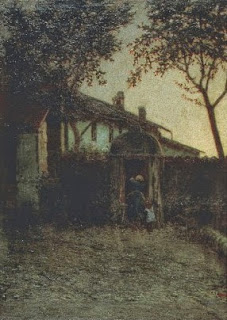