Day For Night: The Pink House 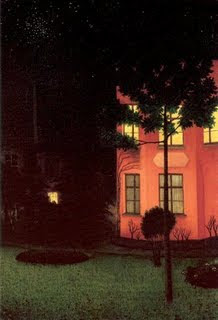 You are looking at one of the most influential paintings from the 1890s; if it reminds you of something Rene Magritte might have painted, you will not be surprised to learn that Magritte himself credited this work - La Maison Aveugle (The Blind House) - as the origin of surrealism.  Surrealism is not so easy to see these days, so completely have its gestures been adopted by advertisers.  The term itself has become shorthand for things that don't make sense.  How curious is it that this alternative version of reality happened as  scientific discovery was explaining natural phenomena in terms of what cannot be seen?  It was distressing enough that Matthew Arnold and Friedrich Nietzsche had already told the world that we were losing our religion; now we were to be deprived of poetry as well.

Like the more famous Magritte, William Degouve de Nuncques was a Belgian artist whose pictures vibrate to the music of an invisible tuning fork.  Perhaps  all art is a balancing act between the id and the ego.   Degouve de Nuncques, who was subject to bouts of depression throughout his life,  explained why he gave La Maison Aveugle  its title this way:  "The blind house; that was a case of the silent, sombre nature that held its mirror to my face, and in the mirror I saw emotive life that had foundered in death."
Logic suggests that artificial illumination would make the night seem less strange but that is not how artists reacted to gas lamps or electric street lights.   The brighter the illumination became the more the night was sculpted by contrasts of darkness and light; paradoxically, the brighter the light, the more mysterious and even menacing darkness became by contrast.

To me, The Pink House (its common title in English), like the other night paintings by Degouve de Nuncques, suggests a refuge from life in stifling interiors. With curtains closed on the lighted windows,  the grass shimmers like a promise of freedom.    Yes, the trees are in full bloom while the bushes by the foundation are nothing but bare branches; this is why trying to pin down what symbolist art meant makes some people want to forget the entire movement.  The signals are mixed, as are human emotions.    The house, whether defined by its color pink (think: warmth) or by its ascribed personality (blind, as some artists considered the bourgeoisie to be to difficult aspects of reality) is a thrilling example of how influential a painting  can be.  Here is one example -  La Maison Mystere by the Anglo-Belgian artist Emile-Antoine Verpilleux. 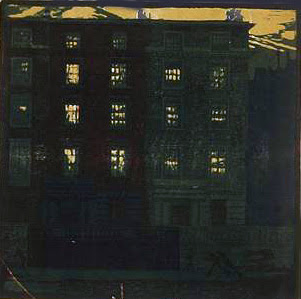 (This and other information and images from the collection of Jacques Doucet at Bibliotheque d'Institut national d'histoire de l'art, Paris are here.
Q. Why Jacques Doucet?
A.  Doucet was the original owner of Les Demosielles d'Avignon (1907).  He  purchasied it directly from Picasso at the artist's studio.
Posted by Jane Librizzi at 1:28 PM

Yes, interesting about the contrast with darkness that came about in art and indeed in daily thinking with the advent of gas lamps and electric lights. Hmmm, something for me to ponder on.

Rouchswalwe, yes, it is as though the light made the darkness visible in a different way. There are oil paintings (Nocturne au parc royalle by Degouve de Nucnques and pastels (un parc la nuit by Jozsef Rippl-Ronai) from the 1890s that show muggy evening scenes, with the air heavy with dew. You can see both of them at the Musee d'Orsay website : www.musee-orsay.fr There is an English text button.

Wow! Thank you for this link, dear Jane!