An Unusual Painting by Jean-Leon Gerome 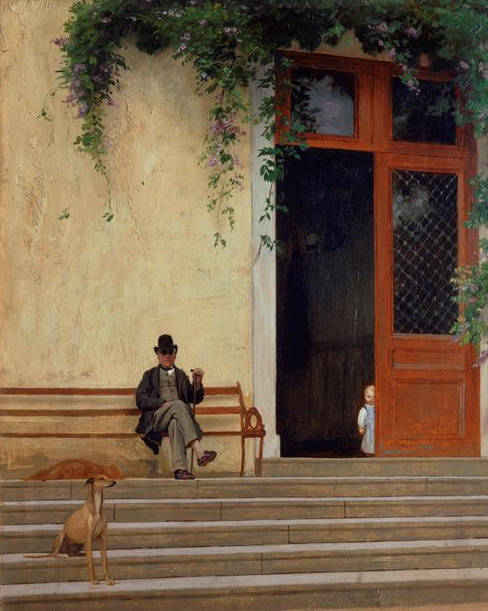 This painting by the French artist Jean-Leon Gerome (1824-1904) is one of my early discoveries via the internet.  Although Gerome holds an important place in the history of nineteenth century art, his academic style and his orientalist subject matter had always left me cold.  I could appreciate his technical skill on display in The Snake Charmer when I saw it at the Clark Art Institute in Williamstown, Massachusetts but the picture never rises above the level of soft pornography, an example of a type of picture  acceptable to a straitlaced public, perversely lacking in the very realism it purports to represent.

Gerome's  Father and son of the artist on the threshold of the artist's country home is something else entirely, a painting unlike the hundreds of paintings of   'exotica'  that made Gerome wealthy and famous.   When I searched the the catalog raisonne prepared for Sotheby's in 1986 by Gerald M. Ackerman the painting was not included.  How could this painting be missed?  Not only is the title as specific as possible, it is a beautiful painting in every way.
If there is anything that connects this family painting with Gerome's other work it is his framing of the image by architectural elements (I include the hanging vines in this category) that occupy most of the canvas.  The setting is Gerome's favorite country home  at Bougival, outside Paris; he colors Gerome uses here suggest the warmth of summer. It is the human figures, and also the two dogs, who draw our attention.  The elderly Monsieur Gerome sits on a bench with a sleeping dog by his side and another dog sits before him like a sentinel.  Meanwhile, his two year old grandson stands inside the a half-opened door, looking out at the world that his grandfather inhabits so comfortably, with what emotions we can only guess. As an image of regeneration and continuity, it is at the same time a personal memento to the artist and universal in its appeal.


Who would have thought that Gerome had a dry sense of humor after looking at his seriously weird exotica?  The following is an excerpt from a brief biography that he wrote for his friend Charles Timbal:
"To prevent seven cities from in the future disputing the honor of my birthplace, I certify that I saw the first light of day in Vesoul, a little old Spanish city.  No miracle took pace on the date of my birth, which is quite surprising.”

As for the Gerome family, Pierre Gerome (1800-1884), the artist's father, was a jeweler and mother Claude Vuillemot, was the daughter of a merchant.  When Gerome  left Vesoul to study art in Paris before his seventeenth birthday, his father told him: “I give you a year.  If that goes well, you can continue.  If the year doesn't work out, you'll have to think about other things.”
Gerome made an auspicious match when he married Marie Goupil in 1861. Her father was  the successful international art dealer, Adolphe Goupil, who is remembered today for having employed  Theo Van Gogh (in his Paris gallery) and Vincent (in London).  A long and happy marriage  produced four daughters who each married well and one son, Jean, who hoped to be an artist like his father.  However,  Jean suffered from consumption  anddied during an influenza outbreak in 1891 at the age of twenty-seven in Cannes, his father at  his bedside.  Jean-Leon Gerome is buried in front of the sculpture Grief, his memorial to his son, in the Montmartre Cemetery where both are buried.

Reviewing an exhibition in 1867, Emile Zola hinted that  Gerome used  photographs to make lucrative reproductions of his paintings easier. That Zola also criticized Gerome for his choice of “ very naughty and even risque” subjects seems hypocritical, given that Zola published the novel Therese Raquin during the very same year.  The plot pivots on a torrid affair  between the unhappily married Therese and Laurent; an affair that eventually leads to murder.
During his long career, Gerome had many students and he kept in touch with them after they  left his atelier.  The American Thomas Eakins was among the most talented but after Eakins was dismissed from the Pennsylvania Academy of Fine Arts in 1886 for using a male nude in a drawing class open to women, Gerome no longer mentioned his name. When a similar proposal was made at the Ecole des Beaux-Arts four years later, Gerome expressed vehement opposition to the idea.  Again, perversely, it  Gerome characterized the proposal  as a “return to total savagery, a phrase that could apply just as well to Gerome's work.  His solution?  Put underpants on the male models!

Aren't connections and unexpected links wonderful? I had no idea Gerome married Marie Goupil, the daughter of a really influential art dealer, Adolphe Goupil. Even if Gerome didn't "use" his connections intentionally, being well connected must have been good for his career.

Hels, it often surprises me, too, the details that get overlooked. But that this painting got missed when it is in a museum startled me. It would be more understandable if the picture was in a private collection.