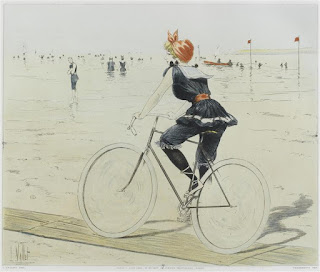 I almost understand why Victorian parents wanted their daughters protected on the beach, from destructive waves and the unwanted advances of semi naked men. But some of the fears were so ridiculous, you have to assume that parents went along with the nonsense simply to avoid public criticism. A "more structured regimen" was code for nasty restrictions, not for sensible protection.

Hels, I tried to suggest here, without being overly didactic, that there was more at stake than appearances. Edna Pontellier did not commit suicide because of restrictions on attire or because she wanted to swim with men. Strength and self-determination can be made visible through appearance but are ultimately more important to our struggle.
For a humorous take on the subject, visit the twitter feed "Man Who Has It All." He's Australian, too, by the way.