Louise Moillon: A Bunch Of Asparagus 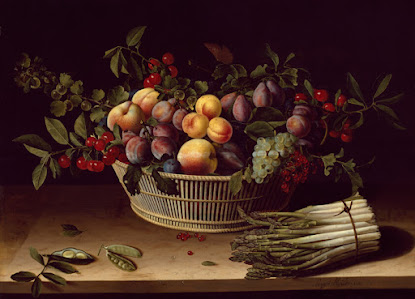 "someone will remember us/ I say/ even in another time." - Sappho, Fragment 147

In full, the title of this painting is Fruit Basket With A Bunch Of Asparagus but the foretaste of spring in the  bunch of asparagus is irresistible. The eye is drawn by a spotlight of mysterious  origin to the to the lower right quadrant of the canvas. Against an indeterminate backdrop,  fruits and vegetables are rendered with a naturalism replete with elegance as well as clarity.

Most of Louise Moillon's paintings were made between 1629 and 1637;a short but impressive career bracketed by a long life. Her father and stepfather were artists and art dealers who provided the young Louise with a workshop, training, studio space of her own, and - crucially - clients for her work. Who her primary teacher was is uncertain although her uncle has been suggested. Eventually  King Charles the First of England acquired five of  Moillon's still lifes  for the royal collection. Indeed, during her lifetime, Moillin's work was widely admired but, like so many other female artists, her reputation faded after her death for lack of champions.

Louise Moillon (1610-1696) was born in Paris; her family resided in the Pont Notre Dame section of the city, a haven for French Protestants who had been forced into internal exile by ferocious religious wars between Catholics and Protestants. Thanks to her father's participation in art local fairs, the young Louise came to know several Dutch painters.  Their influence on her style is apparent. Her still life paintings are ensconced in the atmosphere that Lawrence Gowing identified in the paintings of Vermeer aas "an envelope of quiet air."

Image: Louise (Louyse) Moillon - A Basket Of Fruit And A Bunch Of Asparagus, 1630, oil on wooden panel, Art Institute. of Chicago.

We cannot possibly know every Dutch artist from the 17th century, regardless of how much we love the era. So I looked up the Louise Moillon still lifes that have been published, plus those of women selling the produce in the market. Many of them still looked gorgeous today.

So I looked for a catalogue, and found "Louise Moillon, 17th Century Still-Life Artist: An Illustrated Biography" (1998). Many thanks to you!

Hels, thank you for sharing information!
It would be interesting to know if we would recognize any of the Dutch painters that Moillon met.

Tania, thanks for this information. Taschen publishes very fine art books, don't they!