The Cinematic Art Of Marcel Gromaire 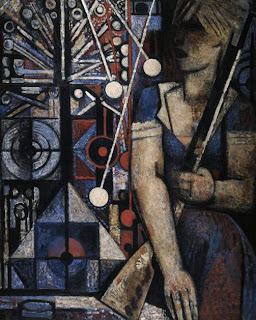 Painter, print maker, tisserand (tapestry maker), film critic.  It was that last unexpected item that caught my attention, in connection with French artist Marcel Gromaire  (1892-1971).  Gromaire began writing about film regularly in the 1920s, at the same time that he resumed painting,  after serving in the army during World War I. Soon this new interest appears in his paintings.  And why not?   Just as painters were influenced by the introduction of the new medium of photography in the 19th century, so it makes sense that in the 20th century another new medium, the motion picture, would capture the attention of artists. Artists  see individual moments while the rest of us attend to other matters.   And novelty always has its charms.  Would we be entranced by still images if all we had known before was movies? 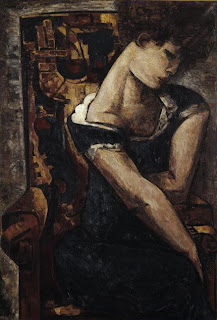 The spot lighting, the profile presented to the viewer that Gromaire employed  in Tir Forain (The Carnival Shooter) and the portrait of Mme Gromaire sitting in a chair both evoke the way  film stars posed before the camera. Not only were actors onscreen large than life - literally, they were at the same time brought into such close proximity to the audience that subtle gestures and a certain withheld quality served to increase their attractiveness.   When Gromaire painted this portrait of his wife Jeanne in 1923 this was a new style of presentaion, but recognizable already to alert viewers.  She may be the artist's wife but with her  arms wrapped around herself and her head bent in thought, Jeanne Gromaire looks antyhing but a passive model.  The muted,  palette  Gromaire used had its counterpart in black and white film but it was a unified color universe that he could use to achieve effects that film makers accomplished through the combination of tinting (coloration) and toning (the balancing of light and dark tones). 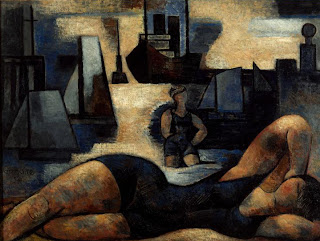 Gromaire's early experiences  at Academie Ranson with the Nabi artist Felix Vallotton   in and  his friendship with the lithographer Jean-Emile Laboureur may have predisposed him to choose - and limit - his palette.  The monumental. presence Gromaire gave to his human figures was his expression of deeply held social and political convictions.  Yet, this too, the artist adapted to a cinematic vision.  In Blue Beach, painted in 1929, Gromaire places the female swimmer in her modern maillot and bobbed haircut so that she appears to be reclining in front of the painting, rather than in the front of it.   The background has the flatness and artificiality of a film set.  This really was new at the time, unlike other paintings of the Art Deco period, with their marmoreal human figures, so brittle and so antique.  Gromaire's women are definitely modern, even when he adds classical paraphernalia.

The frieze Les Loisirs  -  Gromaire's first - was commissioned by the Sevres porcelain manufacturing company for its pavilion at the 1937 International Exposition in Paris.   In the event, Les Loisirs was overhsadowed by Raoul Dufy's massive Le Fee  Electricite (now on display at the Palais de Tokyo in Paris).  Gromaire'  pleasure seekers deserve better.
A cinematic scene of pleasure seekers at the beach, arrayed before a landscape telescoped  in time and space, sandwiched between the Atlantic ocean and the Parisian skyline.   Their varying states of deshabille are borrowed from Renaissance frescoes, while the amphora shouldered by the central figure recalls temple maidens of ancient Greece. In another pan-historical gesture, the trio at right  oblivious to the leftover Art Nouveau lilies at their feet. The achievements of modern French industry and agriculture  are represented by weather vanes, smokestacks, and  windmills.
This artistic tribute to the pleasure principle was conceived  for a fair where the achievements of science and industry were the main draw.  Gromaire's  nudes are ebulliently curvacious, resembling nothing so much as characters that jump out of cartoon birthday cakes. But 1937 was also a year when the presentiment of coming conflict was in the air.  Gromaire was an active anti-Fascist whose affirmative art reminds us what those dark years would obscure but not obliterate.   Marcel Gromaire, ever forward-looking.