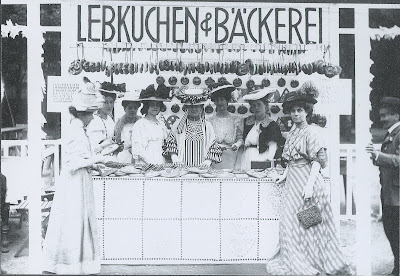 "Gingerbread and baked goods."  Yes, this is a picture of a bake sale.  Not an ordinary bake sale.  A bake sale with sweets designed by Koloman Moser and Carl Otto Czeschka.  And these were not ordinary women in fin-de-siecle Vienna, but rather members of a new class that supported the new art.
The Wiener Werkstatte, chronically short of money, joined in the celebration of the 60th jubilee of the reign of Emperor Franz Joseph in 1908.   Although not an official invitee, the group joined in the festivities, using the occasion to open their new Kunstschau (Art House) as another way to promote the works of their members.  Ludwig Hevesi, commenting on the location of the Werkstatte's showroom, referred to it as gently as possible as "rather peripheral."
The new  Kunstschau wooden building was constructed quickly,  and included dozens of exhibition rooms, a cafe, and gardens, all designed in the new Jugendstil.  When it was finished, some one hundred seventy-nine artists displayed their works for the jubilee,  the most  notorious being Gustav Klimt's The Kiss.

Lili Waerndorfer was one of the first female drivers in Austria, and she even raced automobiles. Her husband, Fritz Waerndorfer, was the wealthy owner of a textile company and the Werkstatte's major financier.  The couple had married in 1895 and they commissioned Josef Hoffmann and Koloman Moser to supervise renovations to their existing home.  Fritz Waerndorfer commented later that when he walked through his front door he could imagine that the Werkstatte existed just for him.  It was Fritz Waerndorfer who opened the Kabaret Fledermaus in 1907, decorated by members of the Werkstatte.  Moser, Knips, and Zuckerkandl would each eventually live in Werkstatte-designed villas.

Edith von Mautner-Markopf, who stands in the center of the group, had studied painting with Carl Moll at the Kunstgewerbe.  She  married  Koloman Moser in 1902.  The black and white patterned reform dress she wears in the picture may have been designed by the Floge sisters.

Sonia Knips (1873-1959), also the Baroness Poitiers des Eschelles, spoke impeccable French.  She came from a family of officers in the Royal Cavalry that could its roots back to Belgium in1745.  She belonged to the minor nobility, a class that felt itself unfairly excluded from the royal court of the Habsburgs, a place that their accomplishments should have earned for them. This was the group from which the Wiener Werkstatte drew its greatest patrons.  Before her marriage she worked as a lady's companion to  wealthier families.   She married Anton Knips, an industrialist who owned a major ironworks, in 1896.  Two years later, she sat for her portrait by Gustav Klimt.  In 1903, she commissioned a summer home in the country from Josef Hoffmann.  Anton Knips shared neither his wife's social concerns nor her interest in modern art. Though they were known to be an unhappy couple,   their wealth, gave the Sonja the wherewithal to become a major patron of the Werkstatte and Josef Hoffmann, particularly.

Bertha Zuckerkandl was a journalist for the Wiener Allgemeine Zeitung, a newspaper published by her brother Julius Szeps.  In her writing, she became an ardent supporter of the Werkstatte, calling its members " a new aristocracy" in an allusion to the hidebound members of the Habsburg court.  Her husband, Emil Zuckenkandl, was a professor of anatomy at the University of Vienna, and their home was for decades a slaon for the city's forward-thinkers  In her memoirs, Bertha Zuckerkandl wrote that it was at her salon that Hoffmann and Moser first discussed the idea of a Secession movement. The Purkersdorf Sanitorium was built at the instigation of Bertha's brother-in-law Viktor Zuckerkandl. 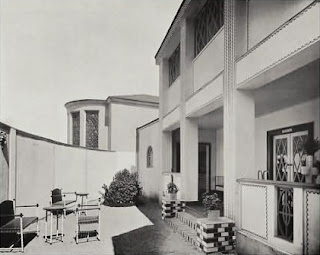 I loved this because it showed that women were not merely models, muses and lovers. Rather they were active participants in the modern world of Wiener Werkstatte Vienna, patrons and facilitators.

Bertha Zuckerkandl and the Warndorfers are old favourites of mine. But thank you for the other names... I will have to look them up further :)

Not surprising, is it, that the gendered division of labor consigned artists, journalists, and major patrons to selling gingerbread in fin-de-siecle Vienna? Women tend to get"lost" in translation, too.
When i wrote an article here about Sonja Knips after visiting the Neue Galerie, I was fortunate to hear from two of her descendents.

Oh, Jane! This is wonderful. So much new information for me!

Rouchswalwe, I hope I made the right translation of "Lebkuchen & Backerei"? English sources disagree about the psell of Waerndorfer. Some leave the first "e" out, some don't.
The Wearndorfers ended up in the States, so maybe I should say something about that?

Fritz Warndorfer was an amazing young man. He was an investor, patron and supporter of the artists and designers, before other people would take the risk. There was only one, small problem - the money he was spending wasn't his. He was paupering his beloved parents and rather than fighting longer with their beloved son over his uncontrolled spending, the parents stuck Fritz on the first ship out of town.

In 1914 he ended up in the USA and was never allowed home again. I am sympathetic to Fritz because he was a great patron, but I do feel sorry for his despairing parents.

Hels, I smiled when I read this comment - I was working on my article at the time, as you can now see.

Oh yes, Jane. Your translation is right. I have to admit that I often translate "Lebkuchen" as "German Gingerbread" because I love it so, and because the spices go far, far beyond ginger only. On one occasion, I even translated it as "Coarse German Gingerbread," and it was nice because it led to questions and conversation. I suppose I overdo the adjectives sometimes.

Does the name Waerndorfer have the umlaut?? ä ... that might be causing the confusion about the spelling. And yes, please, please do say something about them in the States!

Rouchswalwe, the umlaut it is, thank you. As you can see now, I did write more about the Waerndorfers. The Atlantic Ocean acted as a caesura in their lives; everything was different in their enforced new life yet they brought their talents with them, as the connection. Surely, they deserve a book of their own.