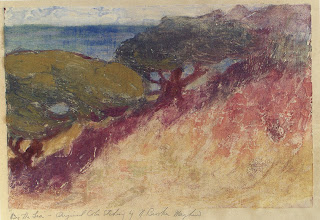 At first glance,  this could be a monotype  by Edgar Degas.
Instead of rural Burgundy, though we have the Pacific coast of California in By The Sea (1920), a color etching by an  American artist, once much admired but more recently neglected: Nell Brooker Mayhew (1876-1940).  Most of her works have been held in private collections but have recently been exhibited at the Sullivan Goss Gallery. 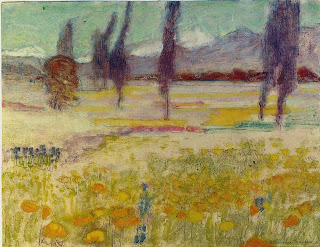 The heightened contrasts under  blazing sunlight  bleach the color  out the the flowers into so many miniature suns in California Poppies (also from 1920), a scene that could also be in central France. But Mayhew, a transplanted Midwesterner, found a landscape of infinite inspiration in California, as her own words make clear.

"It is a thrilling experience to follow along the old trail on which stood the old Missions of California - the first highway on the Pacific coast - a trail thru thew wildflowers and luxuriant growth - following the ocean from the south to the north of California."

"No two missions are alike; each one was built by the plan needed for the specific location.  It seems as if there had been the artist's joy in creating each design a new idea..." - Nell Brooker Mayhew 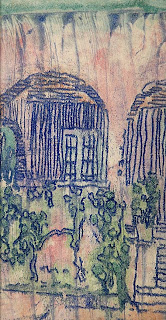 When Nell Brooker Mayhew moved to Los Angeles  in 1908, there was no motion picture industry, and no freeways, but there was a landscape startlingly different from her native Midwest and a whole different architectural vocabulary from that of the Prairie style back home in Chicago.  Bungalow apartments, Arts and Crafts cottages, and the remnants of Spanish settlements, became Mayhew's subjects..
Although dating her works is not always easy, Mayhew seems to have begun etching in color before 1910.  The  method, sometimes referred to as a la poupee, is a painstaking one. First, Mayhew incised her design into a waxed copper plate that she then printed in a background color.  After letting the first print dry (overnight), she rubbed oil paints onto the original plate and reprinted over the original impression.  In this way, she could also make additional versions of the same design by rubbing out the oils and using new ones. 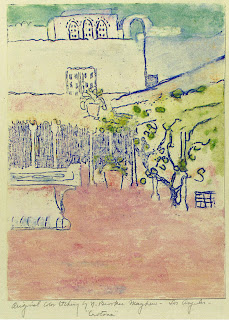 Within a few years, Brooker began a study of the remaining Spanish mission churches of her adopted home. In 1918,  Brooker began driving the state from south to north, with her young daughters Mary Jane (b. 1912) and Nell (b. 1914).
Although she was not the first artist to travel the Mission route (illustrator Henry Chapman Ford created a portfolio of watercolors, etchings and oil paintings, beginning in 1875, it seems a toss-up who had the more arduous trip: Ford in a horse-drawn buggy or Mayhew, accompanied to energetic little girls.
Like Ford, Mayhew took several years to assemble her portfolio of the twenty-one Mission churches  remaining.  For each building, she created a unique view, sometimes of a part, sometimes from a distance, and in one case, the ruins of an abandoned building. 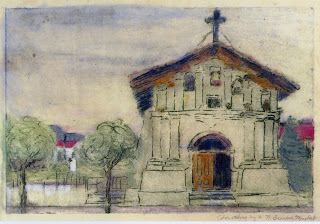 Mayhew also painted with oils and the vivid colors she used  may have led  her to experiment with adding color to etchings. What is unexpected is the sense of movement she conveyed using the two=step method.  Where images of trees and rolling hills often suggest movement, Mayhew entrances our eyes, as we try to understand how she can make a static image like Mission Dolores (at left) come to life through slight curves in the horizontal structural lines. 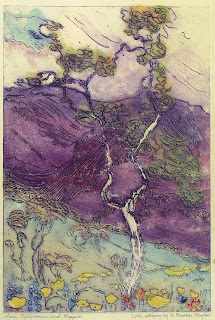 Nell Brooker Mayhew (1875-1940) was ambitious and determined from the very start.  She graduated from college in only three years, then immediately began graduate studies in Chicago.   A brief marriage in 1902 ended tragically when her husband of six months died of a heart ailment.   After more study at the Art Institute of Chicago, Nell Brooker moved to Los Angeles in 1908, settling in the artists enclave at Arroyo Seco near Pasadena. She married Leonard Mayhew in 1911 and, in quick succession, gave birth to two daughters.  Nothing slowed the artist down. 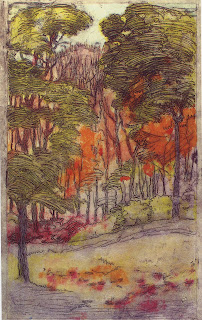 A few other printers worked with the same painstaking  method but, on the available evidence,  none created  images as evocative of movement as Mayhew.  With her dual mastery of etching and coloration she achieved uncommon results, with iamges that are anything but static.
Ernst Klotz, a Leipzig printmaker, born in 1863, is credited with developing the method of painting on the etched plate.  Around 1895 he produced colored etchings printed from one plate à la poupée.  Klotz exhibited with the Munich Secession and also in Vienna.
Also the French illustrator Jean Malo-Renault (1900-1988) from Brittany.
Hermine David (1886-1970), also French, was primarily a painter, who lived and exhibited in New York City from 1915 to 1920. She married the painter Jules Pascin. Of this group, David has the largest reputation.

My thanks to Neil Philip of Idbury Prints for directing my attention to other color etchers.
and Nell Brooker Mayhew: Paintings On Paper by Alissa J. Anderson, Glendale, Balcony Press: 2005.

We would like to see her works really to appreciate the grace and the delicacy - another artist to make better known. Thank you, Jane.

Tania, there are many of them at Sullivan Goss gallery in Santa Barbara California and more online at www.sullivangoss.com

Hank you for the lucid coverage of an artist whose footprints settle so gently in the sand.

What a lovely way to describe her work. For all the painstaking effort that went into its making, the outcome is just as you describe it.

Nell's brother-in-law, Joseph William Royer, was a proficient architect in Urbana, Illinois, Nell's hometown. He designed his residence in 1905, and I recently identified murals by Nell on the walls of the dining room. She also did illustrations for a book of fairy tales authored by her sister, Adelaide (Joseph Royer's wife).
An amazing artist.

Brian, thank you. What are the murals like? Are they more similar in style to her paintings or to ehr etchings or to something entirely different? What a thing to discover!
It is entirely thanks to Frank Goss that I learned about Nell Brooker Mayhew.