Carl Moll And The Semi-Detached House 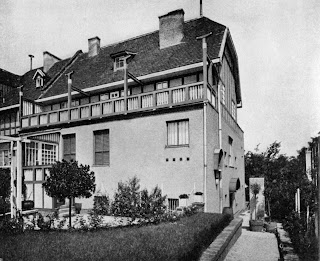 “It is no abstract or decorative surface geometry, which surrounds these people, but a three-dimensional, straightforward clarity.” -  Werner Hofmann,  Modern Malerei in Osterreich  (Modern painting In Austria, in German), Wien, Wolfrum Verlag: 1965.

When I think of Josef Hoffmann's totalizing architecture, one of its notable characteristics is hisgenius for translating volume into planes.  That said, I think Werner Hofmann's assessment of Viennese painting describes perfectly the paintings of Carl Moll (1861-1945). 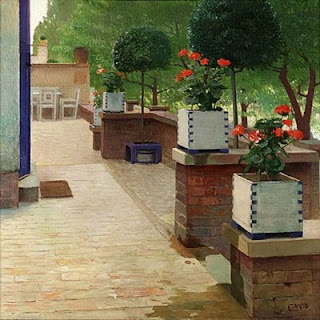 In 1901,   the first house that Josef Hoffmann built  in Hohe Warte, a new suburb of Vienna, was  a duplex for his friends and fellow artists,  Carl Moll and Koloman Moser.   In retrospect, Hohe Warte has taken on the aura of a  Viennese Acropolis:  home of monumental artists, situated on a hill overlooking a great city.
No exaggeration this, because history happened here.  At the time Moll moved to his new house on  Steinfeldgasse  he was President of the Secession. Moll was also married to Anna Schindler, widow of the respected  painter  Emil Schindler, making Moll the stepfather of the beautiful and flirtatious Alma.  It was at Hohe Warte that Alma Schindler and Gustav Mahler met, fell in love and married in 1902.   The next year, Moll introduced Hoffmann to Adolphe and Suzanne Stoclet.  The Stoclets had come to Vienna on business and they were so impressed by Moll's home and garden that they commissioned Hoffmann to build a villa for them at Hohe Warte .  But their plans changed and they returned to Brussels in 1904, where Hoffmann's masterpiece, the Palais Stoclet, was eventually built between 1905-11.
As a Kunstler-Kolonie (colony for artists) Hohe Warte began with just four houses, the Moll-Moser residence at Wollergaase 10,  a villa next door for photographer Hugo Henneberg and his wife Marie at Wollergasse 8, and a villa for another photographer, Friedrich Viktor Spitzer.  Hoffmann viewed the four villas as one total work of art, (after the Secessionist ideal of the gesamtkunstwerk)   incorporating into each one such common features as brick walls and white  rough-cast exterior facades, simple rectilinear shapes, and patterns in black and white. 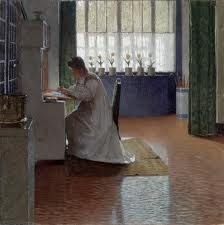 We know quite a bit about Moll's half of the house from his paintings.  That the artist  found an apparently inexhaustible source of images there, painting several interiors.   That he painted the  sparkling geomtry of the terrace  the same year that  Moll was photographed relaxing with his friends Max Reinhardt and Alfred Roller, his new son-in-law, the composer Gustav Mahler, and his doppelhaus neighbor, Koloman Moser.  Moll also did a  self-portrait in his third floor studio (1906) with a sculpture by the Belgian Symbolist Georges Minne and Hoffmann's trademark black and white pattern on the floor.  Moll created - or recreated, depending on your point of view - the effects Josef Hoffmann achieved architecturally, the striking use of  blue and white, the diffusion of light, and harmony between interior and exterior spaces.  In his paintings, Moll often combined  stippling and small parallel strokes, displaying a debt to Divisionist techniques, another interest acquired through his contacts with Belgian artists. 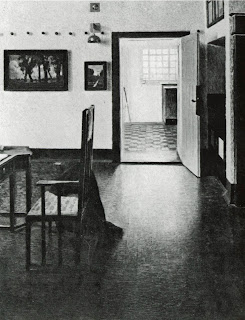 In photographs and in the artist's Self-Portrait (1906) we can see evidence of Moll's work, first as the organizer of exhibitions for the Secession and then as the director of Galerie Miethke in the  taste brought to bear on the decoration of his study, with the aforementioned Minne figure and with paintings and photographs.  The photograph hanging to the left of the door in the Moll study  is Twilight/Dammerung (1896), a bi-chromate photograph by Heinrich Kuehn, a friend and frequent house guest of Moll's next door neighbor, Hugo Henneberg, 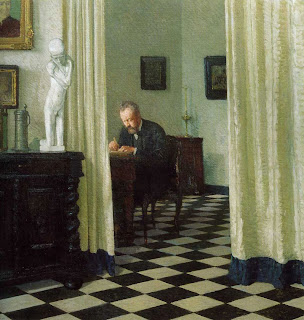 In a special issue of The Studio published in 1906 and devoted to  The Art Revival In Austria,  Ludwig Hevesi pointed to Moll as the one with the social connections. who collected the funds that financed the Vienna Secession.  Moll  “was the very leaven of the new movement, Minister of Fine Arts  without portfolio,” Hevesi declared.
By then Moll, along with Kolo Moser and Gustav Klimt had become discontented with the aims of the Vienna Secession, a group they had helped to found in 1897. They had moved on to establish the Wiener Werkstatte, dozens of whose members contributed to the design of the Palais Stoclet. 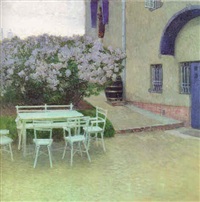 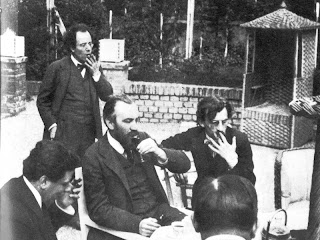 Great post! I know about Hohe Warte and have seen the architecture and paintings. But I hadn't thought about the social life as much. Who married whom, who ate dinner with their neighbours, which son socialised with which daughter, did people discuss the Vienna Secession over drinkies in the gardens?

It was a bit like an artistic kibbutz in its philosophy !

Hels, the artistic talent that lived in those houses when they were built!
Moll commissioned a (second)larger villa from Hoffamnn in 1907 and Alma Mahler later lived in the villa built for Eduard Ast. Imagine if the Stoclet home had been built there, as originally planned.

Tania, me too. I was attracted to Carl Moll's work and wondered why it isn't better known outside Austria. Then I learned more about his questionable character. In later years, Moll was quite happy to cooperate with the Nazis, committing suicide in 1945 when it became clear that they would lose the war. And yet he played such a large role in the Viennese art world, that it is inaccurate to leave him out.