Heinrich Kuehn And The "Hoffmann-style" House 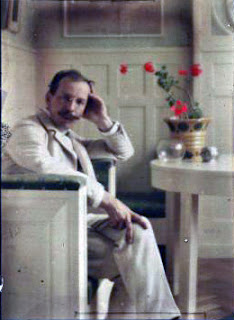 “Something went through the thickets of belief in those days like a single wind bending many trees – a spirit of heresy ad reform, the blessed sense of an arising and going forth, a mini-renaissance and – reformation, such as only the best of times experience; whoever entered the world then felt, at the first corner, the breath of this spirit on his cheek.” – from The Man Without Qualities by Robert Musil, translated from the German by Sophie Wilkins, (in English - 1952, in  the original German - 1930)  p. 54

The year of the photograph (at left) was 1904 and the place was Innsbruck, almost as far away from the capital city of Vienna as you could get and still be in Austria.   The man in the white suit was Heinrich Kuehn, a member of the Vienna Secession and the proud owner of a new "Hoffmann-style" house, as he described it in a letter to Alfred Stieglitz, complete with fabrics designed by Koloman Moser.  Kuehn the photographer was one of the people who felt the pull of the spirit that Musil described.

Heinrich Kuehn (1886-1944) was bitten by the camera bug while studying medicine at the University of Leipzig.  Images framed by the microscope proved  compelling.  After Kuehn's father died in 1893 and Heinrich inherited a fortune, he took part in four photographic exhibitions during the next year.
In 1895, Kuehn was accepted as a member of the Vienna Camera Club where he met Hugo Henneberg and Friedrich Viktor Spietzer, and also Ernst Mach, who used photography as a recording technique in his experiments with the speed of sound, which is another story.   The club was notable for  its inclusion of female members, unusual at that time. 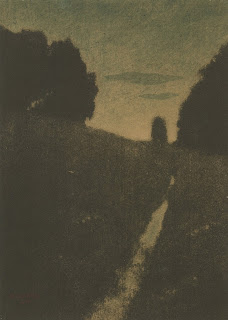 Three of the Secession members, Kuehn, Henneberg, and Hans Watzek designated themselves as the Trifolium  (Kleeblatt) or Cloverleaf group.  Their photographs were published in the Secession's journal Ver Sacrum during 1898, the  same year that Kuehn and Henneberg traveled together to Italy.  In 1901, Henneberg and Spitzer moved to Hohe Warte, an artists' colony designed to demonstrate the Secessionist aesthetic of gesamtkunstwerk or total work of art, its houses designed by Josef Hoffmann.

Kuehn's European fame was at its zenith  in 1900.    Carl Moll, who displayed Kuehn's  astonishing early landscape Dammerung  (1898) in his home atelier, included the photographer's work in the 1905 International Exhibition of Selected Pictorial Photography, held in Vienna.  The American Alfred Stieglitz, who had spent several months photographing with him in 1904, recognized in Kuehn's work the best argument for photography as art. 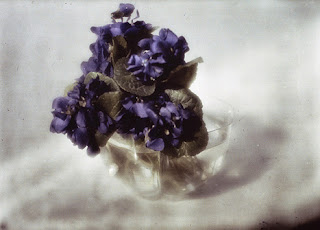 In the early decades of photography, amateurs were the ones who who developed the new medium's artistic possibilities; commercial photographers were limited to a narrower purview by their customers.  Technical aspects were daunting and, as a hobby, photography was a costly one, so most of the early artistic photographers were members of the upper classes.  Yet Kuehn never gave up a keen interest in improving camera technology and the printing process that  remained from his scientific training.  In that spirit, he was among the first in Austria to take up the autochome, introduced by the Lumiere Brothers of France in 1907.   The technical demands that fixing colors in grains of potato starch made on users must have reminded Kuehn in his darkroom of his days in medical school. 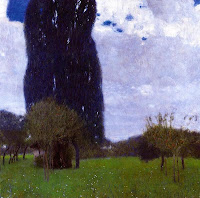 As Kuehn tried various printing techniques, he altered his aims, too.   His early photos make use of depth and perspective, later replaced by a focus on flat areas of pigment. This change may also have been influenced by the style of the graphic designers of the Viennese Secession.  Keuhn's photographs share  an aesthetic recognizable from Gustav Klimt's The Tall Poplar Tree I (1900). Kuehn also admired the  paintings of Arnold Bocklin, as did many of his contemporaries.   There is something circular in the way that a new aesthetic comes into use, something that defies the linear impulses of historians. 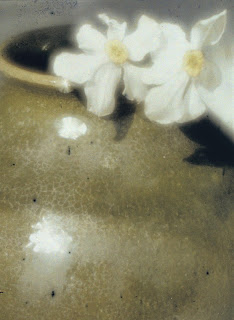 The pains that Kuehn took to perfect his compositions were as detailed as that of any painter.  In him the amateur was rooted in the soil of love, not dilettantism.   His photographs of flowers are a good example.  The intense purple of violets is set off by a clear glass bowl against a white background but the creamy whiteness of the narcissus blossoms peeking over the top of an earthenware jar are highlighted by their own shadows.

The more of Kuehn's photographs you look at, the more you realize that on him, nothing was lost and, by him, nothing was left to chance.  His compositions satisfy the imagination while never boring the eye.  When you consider the cumbersomeness of the processes he had to work with, Kuehn's ability to capture flow is marvelous.    I wish I knew what thoughts were going through his mind when he  made his self-portrait in his "Hoffman style" home. 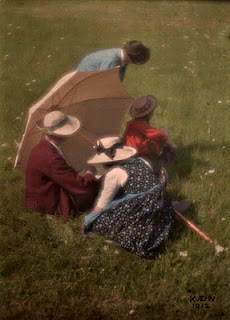 ps. I think this is my 7th attempt to 'prove that I am not a robot.'

It's all new for me and so interesting, Jane. Self-portret with flowers and flowers alone in so special light are remarkable.

Christian, thank you for persevering! I, too, have the "robot" problem.

Tania, articles about Kuehn often focus on photographs of his children, which can lead to the idea that he photographed as we do, just shooting daily life. Kuehn was meticulous in designing his pictures. You caught that by recognizing what he wanted each image to show.