The Garden Of (Emily) Eden 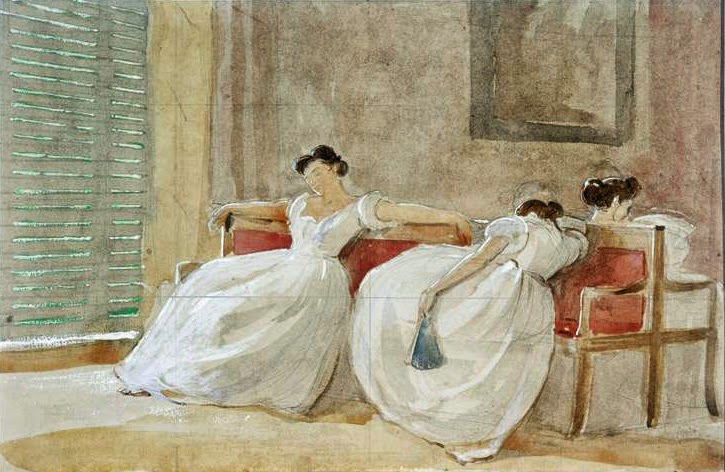 Half An Hour With The Best Authors, a watercolo by Philip Hermogenes Calderon, 1866.

“She began to doubt much whether it were happiness, or anything like it, to be going to be married. ' - Helen Beuafort, a character in The Semi-Attached Couple by Emily Eden (1829, pub. 1860)

The French writer Colette once said that engagement was the sweetest time in a woman's life: she was adored by a man without having any demands placed on her.  Clearly, Helen Beaufort, the does not find it so.  A beautiful young woman of good family, Helen is engaged to Lord Teviot, the matrimonial catch of the season.  He is handsome, charming, and wealthy and madly in love with Helen.  She is even younger than her eighteen years would suggest: pampered and protected, her lack of experience has made her in no way prepared to leave home.  Indeed, she isn't even sure that what she feels for Teviot is love she is frightened by his passion for her.


“Then she found every day some fresh cause to doubt whether she were as happy, engaged to Lord Teviot, as she was before she had ever seen him. He was always quarrelling with her–at least, so she thought; but the real truth was, that he was desperately in love, and she was not; that he was a man of strong feelings and exacting habits, and with considerable knowledge of the world; and that she was timid and gentle, unused to any violence of manner or language, and unequal to cope with it. He alarmed her, first by the eagerness with which he poured out his affection, and then by the bitterness of his reproaches because, as he averred, it was not returned.” - Hlene Beaufort (T S-A C)


“She tried to satisfy him; but when he had frightened away her playfulness, he had deprived her of her greatest charm, and she herself felt that her manner became daily colder and more repulsive. His prediction that she would be happier anywhere than with him seemed likely, by repetition, to insure its own fulfillment. Even their reconciliations–for what is the use of a quarrel but to bring on a reconciliation?–were unsatisfactory. She wished that he loved her less, or would say less about it; and he thought that the gentle willingness with which she met his excuses was only a fresh proof that his love or his anger were equally matters of indifference to her.” - Helen Beaufort  (T S-A C)
After the wedding, things only get worse.  Teviot is jealous of his bride's affections, her attachment to her family, and  is prone to lose his temper about it, leaving Helen bewildered and frightened of him.
Into their honeymoon home, a large house party of friends invites themselves and it is through their intrigues and interferences that the newlyweds  sort out their misunderstandings and achieve happiness together.

So who was Emily Eden and why are her books so obscure now outside her native Britain when once they were so widely admired?
A casualty of our gendered quota system in literature, Emily Eden ( 1797-1869) has been pigeon-holed as a lesser Jane Austen, and Eden's oft-expressed admiration for her predecessor has been used against her own work. While Eden published only two novels  (The Semi-Detached House [1859] and The Semi-Attached Couple [1860, but written in 1829]), and Austen six, Eden's two hold their own very nicely.


Eden was cut from entirely different cloth.  The daughter of William Eden, first Lord Auckland, and Eleanor Elliott, Emily Eden always had more than enough money and a room of her own. Her written voice has a confidence that obviated any need for what Phyllis Rose has called "Jane Austen's tense depth charges."  Eden was the seventh girl in an aristocratic family, deeply involved in politics and public service. And, yes, Anthony Eden, was a collateral descendant in the family line. Jane Austen was fortunate in the love and support for her writing that she received from her family, but she was a spinster in the home of minor landed gentry in the southwest of England.
And what of the other surviving female novelists?   It was a marketing coup of dramatic proportions that the three accomplished writing brothers, Currer, Ellis, and Acton Bell, having gained the notice of literary London, revealed themselves to be three Bronte sisters: Charlotte, Emily, and Ann, daughters of a poor curate from the north of England.  As for George Eliot, who was publishing regularly at the time that Eden's two novels appeared, she was scandalous in her private life but wrote novels of impressive moral uprightness.


Emily and her sister Fanny lived in India for seven years, from 1835 to 1842, when their brother served as British Governor General.  Emily's position had many of the advantages of  marriage without the oppressive responsibilities.  From that position she was able to bravely look at fairy tale marriages, both before and after the wedding.  This temperament showed itself early on, when the 17 year-old Emily reacted to the news that Annebelle Millbank had become engaged to the rakish George Gordon, Lord Byron, by writing to her eldest sister, “She does not seem to be acting with her usual good sense is Mama's opinion as by all accounts Lord Byron is not likely to make any woman very happy.''


This is the nascent creator of Mrs. Douglas, a character in The Semi-Attached Couple, who appraises Helen Beaufort's family as "all laugh as if they thought they had good teeth."  Eden does as much for Mrs. Douglas herself:


“Mrs. Douglas had been an heiress, which perhaps accounted for Mr. Douglas having married her; but though no one could suppose that he married for love, he had been to her what is called a good husband. He let her have a reasonable share of her own way, and spend a reasonable portion of her own money; he abstained from all vivid admiration of beauty within her hearing; he had a great reliance on her judgment, and a high opinion of her talents; and though he was too good-hearted to hear without pain her sarcasms on almost all her acquaintance, he seldom irritated her by contradiction, but kept his own opinion with a quiet regret that his wife was so hard to please.”

Even more remarkably for that time, Eden could turn an analytical eye to politics, having witnessed its operations from close-up.  Another character, a bored young man, suddenly takes up a campaign for political office, astonishing his family because,  as Eden tells us, ''a contested election is perhaps one of the finest remedies that can be applied to a confirmed languor, either of mind or body.''


“Now it is a remarkable fact in natural history that in all the suburbs of London, consisting of detached houses, called by auctioneers 'small and elegant,' or on Terraces described as first-rate dwellings, there always is an invisible macaw, whose screaming keeps the hamlet or terrace in a constant state of irritation.” – excerpted from The Semi-Detached House by Emily Eden
The Semi-Detached House, as its title suggests, has a plot based on the vicissitudes of banking and real estate as they affect another newlywed pair.  The combination of life after the happy ending  and the world of finance and real estate demand a worldly knowledge and sureness of authorial tone far removed from the isolation and vulnerability of world as viewed from Haworth parsonage.

“The Times of the following morning announced two more failures of large banking houses, and there were dark hints in the City article about a great capitalist, which were perfectly unintelligible to those who had not been brought up to talk Stock Exchange fluently...” - (T S-D H)
Recently married and pregnant, Lady Blanche Chester  is unable to accompany her husband to his diplomatic post in Berlin.  Instead, she is ensconced or, as it seems to her, immured in a suburban villa, semi-detached, that she shares with the middle class Hopkinsons, wife and daughter of a sea captain.   An eighteen year-old bride, Blanche is possessed of a volatile temperament (“ ... she was one of those excitable people whose health fades when their spirits are depressed, and who expand into strength when their minds are at ease.”) and an assured awareness of her position in society.
Happily, the two families discover that they share more than a roof.  But a good plot needs complications and Eden provides them, along with her sharp eye for human foibles, beginning with delicious rumors that cast Blanche Chester in the role of a cast-off wife or even more deliciously, a mistress sub rosa.
As for the novels of Emily Eden: Under the rose no more. 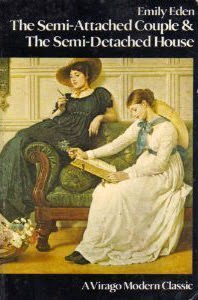 Images:
Philip Hermogenes Calderon - Half An Hour With The  Best Authors, 1866, Tate Gallery, London, UK.
Cover of Virago Press Modern Classics reissue, 1982.
Note: Philip Hermogenes Calderon (1833-1898) was an English painter, albeit the son of a Spanish father and a French mother.   His father, at one time a Roman Catholic priest, became a Professor of Spanish Literature at King's College, London.
Posted by Jane Librizzi at 8:37 AM

I would like to read Emily Eden, but it seems that she's not translated into French.

Tres triste, Tania. How sad.
Below are links where the texts of Eden's novels are posted online.
Maybe there is an online gadget you can use to get a French translation. If you find one on your web server, let me know what it is and how it works. I'll share that with readers here.