Le Givre: Hoarfrost on the Asparagus! 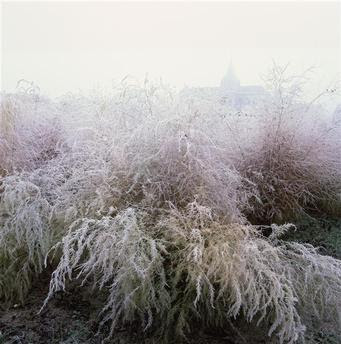 I can never quite decide how good a photographer Jean-Baptiste Leroux is;  he always seems to choose the most photogenic locations.  Grant him that it would be difficult to avoid the centuries-worth of dramatic chateaus and cathedrals that organize the French landscape into a visual history book.  There is much drabness and poverty in the blighted banlieeus that surround French cities like circles of hell but Leroux doesn't go there.  Outside France, he seeks out the beautiful and finds it in the back canals of Venice and the gardens of the Palais Royale at Casablanca.   I don't want to make too much of this,  as Leroux comes to his work with a special love of gardens and interest in biodiversity.  Contemporary French artists seem less inclined to valorize ugliness than their American counterparts; maybe that's what two World Wars and a Hundred Years' War that lasted one hundred and seventeen years will do the  collective psyche.  In any case, it was an inspired choice that the Conservatoire des jardins et paysages (French Conservation of Gardens and Landscapes) made in awarding Leroux carte blanche to document the gardens of France.  When I look at his photograph of frost on the asparagus at Versailles, I feel the bite of the cold.