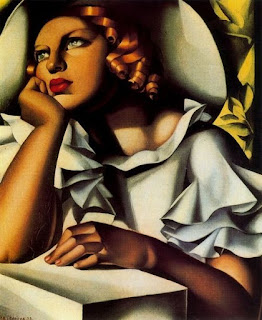 “Alone in her room at night she stood and pressed her face against the window.  It was the end of March and turned cold again.  And all the thumbs of ice began to whirl in shaking circles, keeping with the wind.  I shall have snow on my glassy fingers, and a shutter of snow on my grave tonight.”


“There was no light in the room. Only a dull red ligth in the hall. Someone was walking back and forth back and forth passing her door a captive.  The voice on the other side of ter wall was shouting for someone.  It never stopped all night.  It became entangled in the blankets and whistled the ice prongs on the wind. The rest of the voices were not so distinct.”

- excerpts  from The Shutter of Snow by Emily Holmes Coleman, 1930.

Although she published only one novel, The Shutter of Snow is remarkable in both subject and technique.   Its author Emily Holmes Coleman is now unjustly forgotten. The novel's title originates in Coleman’s intuitive poetic conceit, likening "heat with destruction and cold with freedom”  and draws on Coleman's experience after the birth of her son John in 1924.


The novel's protagonist is Marthe Gail, a young mother  unable to  care for her baby, who is confined in a mental hospital when she begins to hear voices.  Visits from Marthe's widowed father are occasions of emotional turmoil;  his aggressiveness suffocates her. Frantic as she is to escape memories of their shared past, she retreats into silence.  And yet,  she needs to speak her mind to the  important people in her life, her husband Christopher and her psychiatrist Dr. Brainerd.   Marthe's struggle to regain a stable sense of self  is reminiscent of another first person narrator in Charlotte Perkins Gilman's classic The Yellow Wallpaper (1892).

For an obscure author, Emily Holmes Coleman had an illustrious career. Born in Oakland, California in 1899, she lost her mother as a young girl, first to mental illness and then to death. Lonely years at boarding school were followed by four demanding years at Wellesley College. Soon after graduation Emily Holmes married Lloyd Ring Coleman, a psychologist, in 1921.  Three years later she gave birth to a baby boy.  The joyous event became a descent into nightmare; Coleman was stricken with puerperal fever and then, overwhelmed by what we now understand as post partum depression, she suffered a nervous breakdown and was confined to the Rochester State Hospital in western New York.  Insanity was a catchall term used as a blanket to cover many kinds of suffering, inadequately understood. In 1824, Monroe County had founded the hospital as a poorhouse to care for "the raving maniac, the young child, the infirm old man, and the seducer’s victim.”


Coleman found in writing, whether in novels and poems or in her voluminous diaries, a refuge where she was able to order her experiences and gradually take control of her life.  For both Colemans, the move to France in 1925 came as a fresh start; Emily became  the society editor for the Paris Tribune and Lloyd worked in advertising.  Coleman began to publish her stories and poems in transition, a literary magazine where her work rubbed shoulders with that of Hart Crane and Kay Boyle.   Founded in 1927 by the husband and wife team of Eugene and Maria Jolas. transition was a literary magazine devoted to experimental work in all the arts. Her novel The Shutter Of Snow got a negative reception when it was published in 1930.   Coleman's modernist experiments, her use of shifting viewpoints and her subject matter made critics uneasy. They expressed annoyance at the lack of quotation marks to set off conversations, forgetting that these same techniques had been used by Jane Austen and Gustave Flaubert.

Following the publication of The Shutter of Snow, Coleman lived for a year in St. Tropez where she worked with Emma Goldman, editing the anarchist's autobiography Living My Life (1931).  She also became friends, albeit of a somewhat competitive and critical kind, with the heiress Peggy Guggenheim.  Their friendship continued throughout the years that Guggenheim was engaged in assembling one of the major collections of modern art. Back in Paris, Coleman read the manuscript version of Nightwood by fellow. Djuna Barnes. Few people remember that it was Coleman who engineered the publication of Nightwood in 1936. Her skills at suggestion and persuasion worked so well that its editor T.S. Eliot and the general public believed its publication had been Eliot's idea. His enthusiasm for the book led him to call Nightwood "the best book written by a woman in the 20th century."  The Shutter Of Snow should have been so lucky.


Coleman returned to the United States in 1939 and in 1944 she converted to Catholicism, with the encouragement of her friends Jacques and Raissa Maritain.  She became friends with Dorothy Day, founder of the Catholic Worker movement, and spent time in several of their communities.  At the time of her death in June, 1974, Coleman was being cared for at Rose Hill, a Catholic Worker farm on the Hudson River in Tivoli, New York.

The Shutter of Snow is a short novel; for some it may be difficult to read for its style or its content but it is deeply worth the effort.

Despite being a huge reader of novels written by women, I am not familiar with the author's name, Emily Holmes Coleman, nor do I remember the book title, The Shutter of Snow. Why do you think her writing was not offered to high school students and uni students, as Henry Handel Richardson, the Brontes, Jane Austin, Lucy Maud Montgomery etc were.

Love the Lempicka, by the way :)

Hels, I can't imagine a high school that would want to touch this subject.