Virago Made Me: Part Two

The story of Virago and me begins here with the second installment, among the thickets of verbiage that obscured the richness of English literature.  Caught between the Scylla of sober scholarship and the Charybdis of triumphal masculinity, I found no space for my girlish ardor for Literature. Two surveys of modern English literature I was assigned in college were  both written by male critics/novelists; Walter Allen’s The English Novel: A Short Critical History (1954) and The Novel Now (1967) by Anthony Burgess.  Allen’s book was all  measured virtue; Burgess’s book, by contrast, was the work of a man possessed of a rambunctious y chromosome.  When Allen wrote his book Britain in the 1950s had yet to experience the general postwar prosperity that leads to rising expectations.  A decade later. Burgess sensed that a cultural moment was in the making but assumed, incorrectly, that it would be an all-male affair.  Wrong, so wrong.


Burgess began his career as a literary critic with the aforementioned project already in mind:  English Literature: A Survey for Students appeared in 1958, followed by The Novel To-day in 1963 and The Novel Now in 1967.  His ambition to tell generations of students what to read and what to think about what they read was imperious. His credibility was underlined by his wildly successful – and satirical -  dystopian novel A Clockwork Orange (1962).


According to Burgess, the true novelist is a hermaphrodite, like the blind Greek prophet Tiresias, combining the best of yin and yang (Burgess always puts these terms in italics). But he gives away the game when he defines his terms: the yin prose style is “exquisite, careful, full of qualified statements,” while the yang is “less scrupulous, coarser, more aggressive.”  Henry James, meet Ernest Hemingway, and may the best man win!

Only one chapter out of sixteen includes women and it is oh so cleverly titled “Yin and Yang".  Burgess  appends a list (as he does to all the chapters) of some 100+ titles by 14 authors but has little  to say specifically about most of them; he is more favorably disposed to writers of previous generations like Elizabeth Bowen and Rosamond Lehman  (she gets a nod for the 1953 novel The Echoing Grove, “an exhaustive examination of the agony undergone by women in love.”)  or to a writer like Iris Murdoch who seems to float in a religio-philosophic ether above mere humanity and therefore gets three pages!  Muriel Spark, a declared Catholic, gets two and half pages without Burgess even mentioning this most salient theme in her works:  intimations of a relationship between the creative human artist and a divine creator. For Burgess, as for Ralph Waldo Emerson, consistency is the hobgoblin of small minds.

Burgess did manage a few kind words for Elizabeth Jane Howard, a young writer then married to the highly successful - and older writer - Kingsley Amis.  Burgess  punted on  Brigid Brophy, possessor of an  “agile mind” capable of taking on a multitude of subjects, from Mozart to Aubrey Beardsley, from  marriage to the rights of animals.  but he worried that her novel The Snow Ball (1964) was likely to be misunderstood  “more as a female manifesto than a novel of quality.”   Burgess may have felt the need to aim his barbs carefully in the confines of the  British world of letters;  Brophy was married to the respected art historian Sir Michael Levey.  The lesson for intellectually-minded girls was clear:  you need a protector, only a man or the mantle of religion will be strong enough. 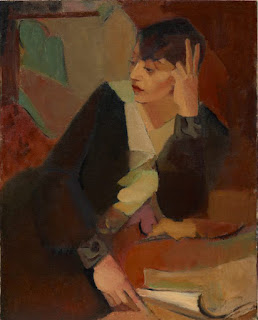 Women, as Burgess makes clear, go in for all sorts of tiresome relationship autopsies, so it makes sense that he dismisses Edna O’Brien, author of The Country Girls Trilogy,  as “(a) minor, near-popular woman novelist”, a creator of heroines “wronged, demanding, insatiable.”  Penelope Mortimer’s novel The Pumpkin Eater (1962) was compromised by her vision of "the torture of marriage” although Burgess never mentions the protagonist’s illegal abortion, a desperate attempt to save her marriage. The urgency of her narrative leaves him unmoved or, as I now think, affectless.   Mortimer herself told an audience in 1964  "I have put into this novel practically everything I know about men and women and their relationship to one another."

Even more offensively, women writers, for reasons that elicit no interest from Burgess,  insist on  portraying women’s sexual needs and their search for reliable forms of birth control. He laments the popularity of Mary  McCarthy’s best-selling novel The Group (1963), finding it  “a pity it found so large an audience”   The received wisdom among men, following the introduction of the birth control pill and continuing unshaken until the reality of the AIDS crisis put an end  to the euphoria, was that a sexual “revolution” had rendered sexuality unproblematic for all time.  When the Swedish Academy awarded Doris Lessing the Nobel Prize in 2007, it cited the historic importance of her novel The Golden Notebook: “The burgeoning feminist movement saw it as a pioneering work, and it belongs to the handful of books that informed the 20th-century view of the male-female relationship.” Burgess saw only “a powerful expression of resentment of the male."

Burgess, a canny self-promoter, even provided his own back cover blurb: “..(to hurl oneself arbitrarily at the library fiction shelves is to waste a lot of time and to insult the novel)” and “…it seeks to instruct, not inflame.”  No comment.
The terms may have been updated or cleaned up in recent decades but triumphal masculinity is still with us and scholarship still serves as its handmaiden.  As for the term virago, there are two common definitions a.) an angry woman who complains and criticizes. and b.) a woman who displays exemplary and heroic qualities.  I'll have both, please.

NOTE TO READERS: more parts on the way.

Tania, thanks for the French definitions. I like that we can take a word that has been used to shame women and turn it to something to be p[proud of.