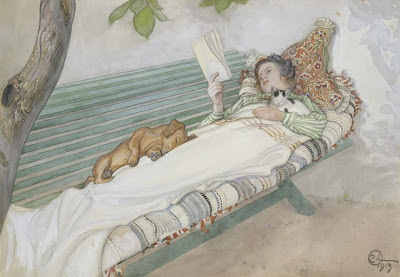 As a picture of relaxed ratiocination Young Girl Stretched Out On A Bench is difficult to beat but I would not have given it a second look had I not read  "The Guardian Angel" written by Neil Philip at Adventures In The Print Trade. Carl Larsson was a purveyor of sentimentality I would have said.   Until recently,  the equal contribution in every way to the Larsson enterprise of the artist - and Carl's wife - Karin Bergoo Larsson barely registered on many of us either.
The deliciousness of the scene is the first thing that suggests summer to me. The utter relaxation of the little dachshund lying along her side as the young woman reads the paper and cradles the cat, seems so unguarded and comfortable that it appears unposed.   The suggestion of a tree frames  the image, leading the viewer's eye toward the red pillow that has been upended into its most comfortable position.
The feast of diagonals on display here is organized in a harmonious hierarchy and that, I think, was deliberate.  The green slatted  bench is multi-colored within its narrow range while, on the other side of the white swath of the blanket,  the irregularly striped cushion underneath her, complete with candy-striped fringe. The color red of the stripes near the top of the blanket join with the red printed cushion to outline the young woman in the green and white striped dress. To put all this into words makes it sound busy and stiff, which it is not. This may be Carl Larsson's masterpiece, I think.
Image:
Carl Olaf Larsson - Young Woman Stretched Out On A Bench, 1913, Louvre Museum, Paris.
Posted by Jane Librizzi at 12:58 PM

Thank you! Over the years I have found many paintings that share many features in common with Larsson's Young Girl Stretched Out on a Bench. Consider Lavery, Phillips Fox, Munnings etc:
1. the date is almost always late Victorian or Edwardian
2. always a woman, usually young and pretty
3. the dress is soft, white and comfortable
4. mostly in a hammock in a garden setting.
5. the hammock or bench is often on the diagonal
6. mostly in summer, often with the sun rays filtered by trees.
7. passive leisure, mostly books.

At a time when women worked very hard in their homes, these Edwardian images of lovely young women reading in the summer sun must have been totally tranquil.

Hels, there really isn't much new under the sun, is there? But this is an especially charming example, I think.

A Dachshund! Gotta be a Dachel!

Rouchswalwe, we used to have a "Dachs-Beagle" named Taffy for her coloring. Larsson got the pose - the snuggle-relaxation - exactly right.