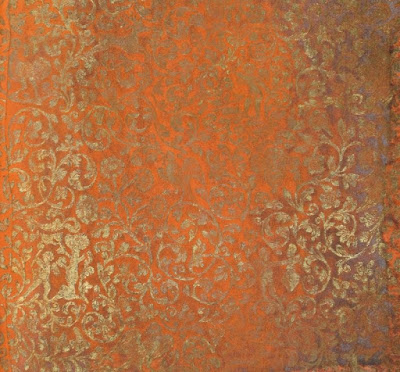 Imagine receiving a package wrapped  in leaves of gold like these.  It could have happened if you had been  a French aristocrat living  during the 18th century. 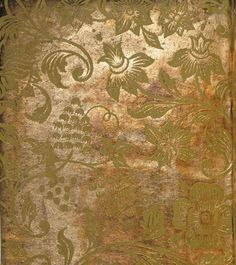 Something about the vivid colors that come with autumn here in the northeastern United States reminded me of brocade dore (gold brocade).   The French have a name for these papers - feuillets à vernis doré -  which translates roughly to 'leaves painted with gold' and it was from French that I first learned about them, and then that they  were a German creation.   First manufactured in the city of Augsburg around the end of the seventeenth century, the papers were used by  bookbinders to decorate special editions.   The French were quick to borrow the custom but it took decades for them to master the creative process, so that when the philosopher Diderot used them to wrap the volumes of his monumental Encyclopedia in the 1750s, the papers he used were still imported from Germany. 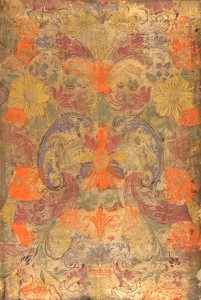 There were two types of gold papers, varnished or embossed.    To make a varnished paper (Bronzefirnispapiere) a paste of shellac mixed with bronze powder, copper, tin or brass was used to coat the paper.  The paper was then passed through a press, after being stenciled with a design. Varnished papers were gradually superseded by embossed papers (Brokatpapiere), sometime between 1720-1730.  Embossed papers, as their name implies, had a raised surface and the additional dimension. The papers were primed with a metal alloy and then pressed with heated metal plates.   Any residue of metal was dusted off.

Styles varied too.   German  prints  were designed with human characters or animals scattered among the flowers, fruits, and foliage whereas the French taste leaned toward more rational arrangements based on  small geometric patterns of stars, circles, etc. Here  very autumnal colors appear in an early French gold leaf print, dated 1710, by Jean-Rene Jouenne,  a chevalier in the King's army.   If you look  through the colors, you see a symmetrical arrangement around a central axis, suggesting a tree trunk. 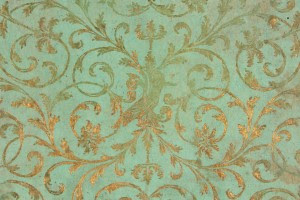 For more go to Conde Library at Chateau de Chantilly.
The exhibition Papiers de garde dores at the Conde Library  in 2005 was the first major display of the gold leaf papers in France.
And for an entirely different and amazing version of packaging as art, read How To Wrap Five Eggs by Hideyuki Oka, New York, Weatherhill: 2008. 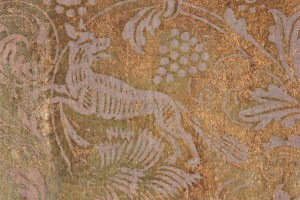 Posted by Jane Librizzi at 9:55 AM