Andre Beaudin: Designing His Own Landscape 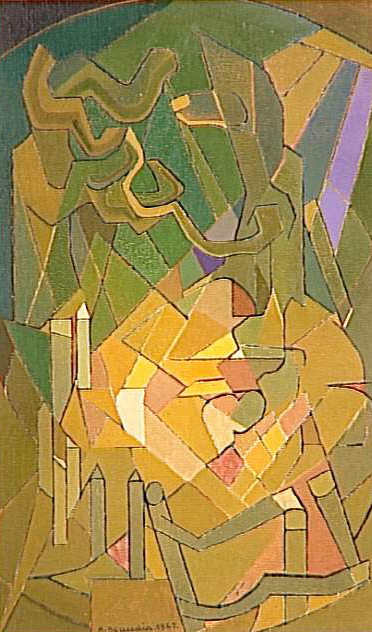 " (T)he lack of understanding of the work of Beaudin constitutes one of the greatest injustices of our time." - Pablo Picasso, translation by J.L.

Whether his paintings were figurative or abstract, Andre Beaudin's pictures show the influence of  his background as a tapestry designer.   Although he was living and working in Paris  during the 1920s when Cubism was in style, Beaudin found it too formulaic and too rigid for his purposes.   He excelled at  using form and color,  making lyrical canvases that seem to move before our eyes.  As an example of his boundary-pushing work, La cloture (The Fence) could hardly be more exemplary.  If this is a fence, it is a peculiar one, wayward, inconsistent, and even anarchic.

Andre Beaudin (1895-1979) studied at l'Ecole des Beaux-Arts in Paris.  In 1919 he married the painter Suzanne Roger.   Writing for an exhibition at the Pompidou Center in 1970, Reynold Arnould had this to say about Beaudin: " His color has a kind of transparent quality, that of reflection..." - translation by J.L.

The Greek philosopher Plato wrote that an orderly landscape was the cornerstone of political stability.  The Romans agreed, elevating Terminus as the  god  of boundaries, the keeper of property and agriculture.  Boundary stones, called termini in his honor, often contained his carved image in the walls that protected farm fields against trespassers and thieves.  Even the feast of the New Year was dedicated to Terminus, celebrated with the  gift-giving of wine and stones.

To show how seriously the Romans took their boundary lines, the punishment for violators who moved the stones was to be burned alive, along with their livestock.   ( This ghoulish bit of information comes from one of the great histories of the 19th century, The Ancient City (1864) by Numa Denis Fustel de Coulanges.)
Today, the jack o'lantern is a secular descendant of the termini.  Roman law fixed the sacred boundary space at two and one half feet, wide enough for walking, worshiping, and patrolling. Mayhem aside, evidence left to us in the paintings of numerous  19th century artists  shows  the Italian landscape still bisected by these antique walls, but in this more settled agrarian state, serving as resting places for humans and their dogs.