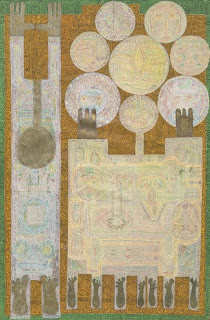 At the Museum of Modern Art in Manhattan a Picasso, a Picabia, a Matisse, an Ensor, and a Boccioni have been put in storage while seven works by other artists have been interpolated into a gallery of the permanent collection.  This sort of thing happens often,  a rehang that refreshes the relationships between works of art on museum walls.  But  six  of the works brought out of storage are by Iranian artists and one is from Sudan.   While the the museum's curators make a point about the inclusiveness of art at a highly charged political moment, they have had the art works  to illustrate the connections between European modernism and art from other continents at their disposal for decades.   Matisse and the Cubists hanging side by side with works that Europeans studied, imitated, and mined for  their own art,  coming from a museum that has, from its beginnings in the 1930s, appointed itself the narrator of  modernism, is a retelling long overdue.

Is the history of art a European invention and, if it is, what does it matter? This question may seem rarefied or trivial but when large pots of money and  intellectual prestige are involved the question becomes loaded.  Whose painting hangs next to whose provokes similar angst to who gets into an exclusive club.  James Elkins,  who teaches at the School of the Art Institute of Chicago, has been worrying this bone for quite some time in books like Stories of Art (2002) and Is Art Global? (2007) and he is still immersed in the subject, having completed some 300,00 words on  his newest (unnamed)  project.

The two works shown here are not new nor are they new to the Museum of Modern Art.  Mon pere et moi by the Iranian Charles Hossein Zenderoudi (b. 1937) is a large work that uses bright colors to depict an intimate relationship.  Alfred H. Barr, Jr., bought the work for the museum the year Zenderoudi created it, in 1962.  Zenderoudi studied both fine and decorative arts in Tehran. Ibrahim  ElEl-Salahi's  The Mosque, painted in 1964 and purchased  for the permanent collection the following year, is small and its colors muted, while the artist's use of Islamic  calligraphy  suggests the mosaics used to decorate architecture in Arabic countries.   Even without knowing the calligraphy's lexicon, it is easy to see a sense of uplift in the juxtaposition of forms and gestures that run across the midsection of the canvas.  Born in Sudan in 1930, Ibrahim El-Salahi came to New York on a grant from the Rockefeller Foundation in 1954.  He became friends with the African-American painter Jacob Lawrence, whose monumental Migration Series is divided, half at the Museum of Modern Art and half at the Phillips Collection in Washington, D.C. 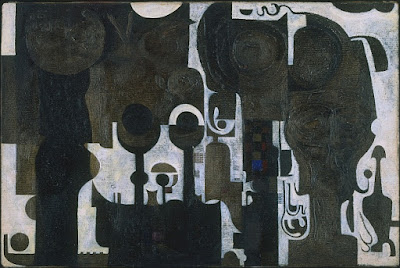 Very interesting (and very just, your remark on the relative size of the works, it's important to indicate it in the legend), thank you Jane.

Tania, thank you. You are so right. I'll try to remember to dot that do that more often.