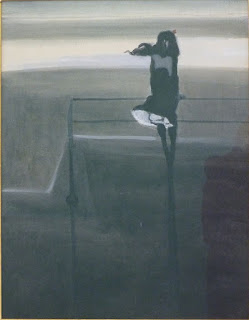 "A day of travel like many others over these past years. Is it because the world shakes on its foundations that one is so used to living in perpetual movement? Is it a premonition that a time is approaching when countries will erect barriers between them, so you yearn to breathe quickly, while you still can, a little of the world's air?" - Stefan Zweig, from his journal, dated 27 September 1935, (translated from the German by Will Stone, 2010)

More than a century separates us from Stefan Zweig yet these lines could easily have been penned yesterday.  Zweig, who was Jewish had fled continental Europe to England in 1934, but in 1939 as war came to England he moved on to the United States, ultimately finding uneasy refuge in Brazil, where he and his wife Lotte Altmann committed suicide in 1942.

Two young men, born in the same year, and full of promise.  One, the artist Leon Spilliaert (1881-1946) paces the shore by the sea wall late at night when his ulcers brought on insomnia and drove him out-of-doors.  The Viennese writer Stefan Zweig was twenty-one when he came to Ostend in 1902.  At twenty-one Zweig had already published five novellas and was well on his way to earning a doctorate in philosophy at the University of Vienna.  As for Spilliaert, just finding his vocation, his  would be displayed next to Pablo Picasso's in 1904 in Paris.

They also shared a mutual friend, Emile Verhaeran (1855-1916).  A prolific poet who was born in the Flemish part of Belgium but went on to write in French, Verhaeren was nominated for the Nobel Literature Prize six times. In his art criticism he advanced the merits of young Belgian artists including James Ensor, another Oostendenaar.  Spilliaert went to work for Verhaeren's publisher Edmond Deman in 1903, where the successful poet inspired and encouraged the tentative painter.  The first of many biographies that Zweig would write on Verhaeran, was published in 1910.

The two favorite occupations of the summer visitors were not swimming and sunbathing but were instead  gambling and racing, racing of all sorts, cars, yachts, horses, and dogs.  There was a febrile quality to their pastimes, as Zweig related in "The Season in Ostend" how, in 1901, when the gaming rooms had to closed the Belgian government proposed to award the town millions of franc in compensation for their losses.

It was only when August ended that the ordinary face of Ostend became visible: the fishers pursuing their marginal living and the ships coming and going from the deep water ocean port.  After repeated bombings by the Germans during the Second World War, the grandeur that had been summer at Ostend was replaced by a drably uniform modernism.  The sea wall and the long pier jutting optimistically into the Atlantic are still there, as Spilliaert as wondrously as painted them.

There is more about Leon Spilliaert at Blue Apple, Green Sea.

Tania, thank you for the kind words. I hope you get to do that and that you will then write about it for the rest of us.

Thanks for the link, Tania.