The Quarantine Library: Part One 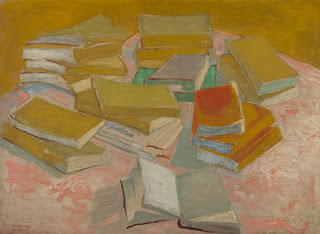 My new favorite person is the postal carrier.  Every day with unfailing good cheer he makes the rounds of my apartment complex, the sound of his wheeled cart announcing his imminent arrival.  Although there is less bulk mail to pass out these days, he has so many packages to deliver that he makes repeated trips to the mail truck, full almost to bursting with boxes.  Many of them are books.  I should know, because I have ordered so many in the past eight weeks that I can spot a book box from my balcony. In thanks, I now decorate every bill and letter I mail with the legend "I HEART USPS." 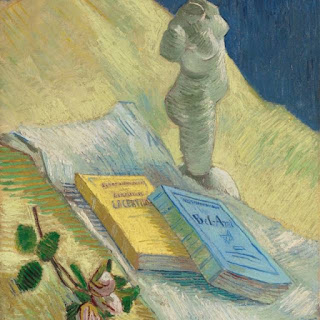 I.One of  my first picks was Vincent's Books describing Vincent van Gogh's insatiable appetite for reading - and for writing about it in his journals.  I, too, began to keep a journal of what I was reading at age thirteen.  Van Gogh writes to his brother Theo and others about the connections he makes between the Bible (he was an itinerant preacher before he turned to painting) and socially engaged literature by Jules Michelet, Alphonse Daudet, Emile Zola, Charles Dickens, etc.  Such did these books resonate with him that van Gogh not only included them in his paintings but also made sure that their titles were legible.

The books in Still Life with Statuette (at left) are Germinie Lacerteux by the Goncourt Brothers  and Bel Ami by Guy de Maupassant.

And now let me offer a few brief thoughts about some of the books I have been absorbed in these past eight weeks.

II. Effie Briest is one of those classic novels I have intended to read but hadn't. Theodore Fontane is generally considered the greatest German novelist between Goethe and Thomas Mann.  I have written about another Fontane novel Irretrievable (see hyperlink).  Fontane portrayed his female protagonists with  unusual empathy for a 19th century writer.  Then there is Chance,  Joseph Conrad's only novel to have a female protagonist.  Published in 1913 it was Conrad's "New Woman" novel. The story is told by Conrad's frequent narrator, Marlow. Conrad is more sympathetic to women's lot than H.G. Wells, whose success with the novel Ann Veronica (1909) urged the subject on him; it proved to be Conrad's first major commercial success.

III. Please Talk to Me by the Argentine writer Liliana Hekeris the first collection of stories to be translated into English.  A darkly humorous writer who refused to go into exile during her country's "Dirty War", Heker uses the microcosm of  the family and everyday life to illuminate covertly the social and political life under a dictatorship.

IV. Blaming is the last novel, published after her death from breast cancer, by the British writer Elizabeth Taylor.  Taylor has been described as "the thinking person's dangerous housewife."  Often mistaken for a harmless domestic novelist, Taylor used wit and subtlety to reveal the horrors buried in home life. And she was more than equal to the challenge of making an unsympathetic character a memorable protagonist.

V. The Women in Black is a charming and humorous ode  to women working in an upscale Sydney department store in the 1950s. The title refers to the black dresses that saleswomen were required to wear as a uniform.

VI. The Outward Room is a novel from the Great Depression; its atmosphere has echoes  of our current duress.  Harriet Demuth, a young woman who has a nervous breakdown after her brother's death, escapes from the asylum and, with few resources, travels under darkness to New York City where she lives a hand-to-mouth existence, even sleeping on the subway when she cannot afford a room (history has repeated itself in the pandemic)..  Millen Brand worked as an advertising copywriter for New York Telephone, writing his novel in the two hours before the day's work began.  Presciently, Brand  recognized the foolishness of the Freudian nostrums that the psychiatrist presses on Harriet.

VII. In Idra Novey's The Next Country the poems follow the poet's journeys through Central and South America.  Novey is an American writer who has translated works by Clarice Lispector (Brazil), among others.

VIII. I have written here recently about Jozef Czapski and will probably do so again, thanks to Eric Karpeles' book.  Czapsky was born in Prague, studied law in St. Petersburg and art in Krakow, became an officer in the Polish army, and  a prisoner of war in the Soviet Union, and moved to Paris after WWII ended. Born into an aristocratic family, Czapski, who was extremely tall, towered over his friends.
Becoming a painter was almost as difficult as being a prisoner of war; the 20th century kept intervening. Anyone who can deliver lectures from memory on Marcel Proust in a prison camp is no ordinary mortal. After the war Czapski became a diplomat, a writer, and a historian of the toll the war took on Poland. And, although a devout Roman Catholic, Czapski wsa more at ease with his homosexuality that contemporaries.

IX.  Short Life in a Strange World  by Toby Ferris is a hard book to characterize, part art criticism, part philosophy, part memoir.  At the age of 42, Ferris embarks on a five year mission to view all 42 known panels by Pieter Bruegel the Elder, great Flemish painter of the 16th century.  His travels take  him to 22 galleries in 19 cities and 12 countries and across two .continents. Ferris shows us how to read these teeming images for how life was lived  in the Netherlands of the Renaissance.
This is also the story of Pieter Bruegel the Younger who ran a successful workshop making copies of his father's works and Ferris invites us to make comparisons and choose which versions we prefer.  Surprisingly, to non art historians (like me), The Fall of Icarus, that most familiar of Bruegel the Elder's paintings is a copy made by his son, from an original that has been lost.

I have listed the books in the order that I read them.  All but two are paperbacks.  When the publication date is in parentheses that indicates the original date of publication, not the date of the edition I bought.

About Love and Other Stories - Anton Chekhov, translated from the Russian by Rosamund Bartlett, Oxford University Press: 2004

Vincent's Books: Van Gogh and the Writers Who Inspired Him - Mariella Guzzoni, University of Chicago Press" 2020

I am surprised and delighted to read that Vincent Van Gogh wrote to his brother Theo etc about the connections he made between the Bible and socially engaged literature eg Emile Zola. I say this, not because I thought Vincent was illiterate or shallow. But because he was socially awkward and often mentally unstable. Reading literature and writing about it, let alone painting, took peaceful thinking time.

Hels, from your comments I guarantee that you will love this book when you are able to get hold of a copy. It is also beautifully designed and presented, the reproductions of the paintings from private collections are superior to any copies I could find online.

Correspondence between Vincent and Théo Van Gogh is a must to get into the painter’s preoccupations, yes! Very happy to discover your last readings, Jane, and learn more about "Effie Briest".

Jane, I am ashamed to admit that, although I work in the Germanic Department at one of the largest state universities in the United States, I have not yet read Fontane's Effi Briest. You have inspired me, and I will work on putting together a listing of my quarantine books, too. The Women in Black interests me, too.

Rouchswalwe, I find Fontane's female characters ro be much more fully imagined than many 19th century writers.
Interesting tidbit about Anna Karenina - when Russian archives were opened after 1989, the world learned that the unevenness of Tolstoy's characterization of Anna came from his wife Sophia. He "borrowed" portions of her journals when it suited him to flesh out Anna's character.
I'm looking forward to reading your list!
Yes, "The Women in Black" is fun. Hilary Mantel writes that it is THE book she gives to people to cheer them up.