There's A Word For It: Bonnarding 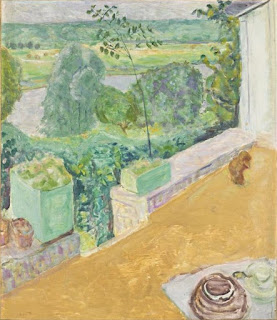 "Because nothing is ever finished/ the painter would shuffle bonnarding,/ into galleries, museums,, even the homes of his patrons,/ with hidden palette and brush:/ overscribble drapery and table with milk jug or fattened pear,/ the clabbered ripening colors of second sight.

Though he knew the time the pentimenti rise - / half-visible, half brine-swept fish, their plunged shapes/ picking the mind - toward the end, only revision mattered:/ to look again, more deeply, harder, clearer,/ the one redemption granted us to ask." - excerpt from "History As The Painter Bonnard" by Jane Hirshfield, from The October Palace, New York, HarperCollins: 1994

There is a story that may or may not be true, that Pierre Bonnard was arrested in the Louvre, paintbrush and palette in hand, standing in front of one of his own paintings, reconsidering and retouching it. That it has come down to us ...suggests how plausible it seemed to the artist's friends, whether or not  true.

The dog on the terrace may gave this painting its title but could be the last thing you notice about the picture.  The view from the terrace draws the eye first. What a pleasant and varied vista, a landscape with trees and fields and a brook running by. Then the cloth laid on the diagonal in the lower right corner opposite the stairs catches the eye; a cup and saucer, a spoon, and a pot are at the ready for a petit dejeuner en plein air. Only then de we notice the little dog curled up by the garden wall. This too is bonnarding, painting as an adventure.  The process is the point.

Bonnard has been claimed as the first abstract expressionist for the immediacy of his brushwork, full of flexibility and improvisation. Looking at a Bonnard painting, especially later ones,  we sense his pleasure at moving paint around  on the canvas. He simplified his subject matter the better to concentrate on formal elements, color, shape, etc.

Unlike the Impressionists,  contemporaries of his youth, Bonnard was uninterested in painting  en plein air. He was perfectly content to paint the view from his window or terrace. Instead of  paining at an easel, Bonnard tacked his canvas to a wall. A restless spirit, he usually had several canvases in progress at a time. Sometimes he even painted several subjects on a single canvas, to cut up later when they were finished.  His eccentricities extended to mixing his paints. Rather than use a palette, Bonnard mixed his colors on plates, walking back and forth from the wall to a table where he haad arranged the plates to his liking.

It was in 1904 that Bonnard discovered the Midi when he visited his friends from the days of the Nabis, Ker-Xavier Roussel Edouard Vuillard ,at Saint-Tropez. The light and the vegetation came as a revelation to the Parisian. "I had a thousand and one nights...The sea, the yellow walls, the reflections as colourful (sic) as the lights." From then on Bonnard spent his winters in a succession of rented houses until, in 1922, he purchased :a house in Le Cannet.  Le Bosquet, the pink house became, along with his companion Marthe and a series of little dachshunds, all the inspiration  he needed.

The first time I heard about Bonnard, it was in a formula : "Bonnard, le peintre du bonheur". The attraction was immediate and he is one of my favorite painters. Thank you for this post, Jane: it shows that you have to take the time to "read" a Bonnard painting to see a dog, a cat, a figure - just happiness for me !

Tania, thank you. Bonnard was gradually seduced by color above all else. Drawing became secondary. He paints the happiness of ordinary life and has no need for grand stories.