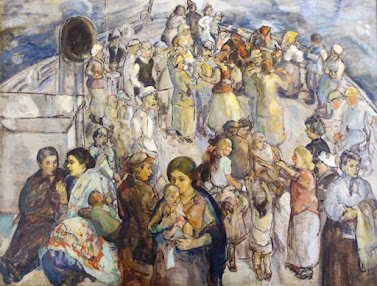 One of the ideas running like Javascript behind this blog is that the history of the arts is more than a reductive mythology of large personalities. Like the writer who pens one or two good books but gets overshadowed by the colorful character who attracts academic acolytes, there are artists who produce a handful of memorable images but not enough to launch ancillary careers.  Theresa Bernstein is one (1890-2002) despite a very long career.

Bernstein was known for her portrayals of the bustling crowds of New York City.  The Immigrants is  something quite different, a maritime picture of a kind, people huddled together on an ocean-going ship,  waiting hopefully for the sight of land. They are heroic in a way we are not accustomed to think of as heroic, voyagers into an uncertain future.  Anchoring the picture at center front is a young woman holding a baby; around her head an envelope of air that draws the viewer to the tiered decks receding behind her. A deft way to suggest the depth of space with sparse shadowing.

Before she painted The Immgrants, Bernstein's work was exhibited alongside that of Edward Hopper.  Bernstein pretended that she had been born in America but her compassion for the trials of her fellow immigrants shines clearly in The Immigrants (1923).  The group stands on the deck of the Cunard R.M.S. Aquitania. Although the immigrations numbers were falling during the 1920s, nativism was rising and  Congress passed two laws to restrict immigration and set ne birthplace quotas.

Born in Kracow in 1890, Theresa Bernstein was brought to the United States by her parents and  raised in Philadelphia.  The Bernsteins were a well-educated., cultured family.  When the Bernstein family moved to New York City in 1912, Theresa established a studio of her own near Bryant Park. She enrolled at the Arts Students League where she studied with William Merritt Chase and attended the earthshaking Armory Show in 1913 where ordinary Americans were introduced to all manner of non-representational painting.  Bernstein had already been impressed by the works of Manet, Cezanne, Matisse, and Picasso on two trips to Europe in 1905 and again in 1911. Bernstein continued to produce art during every decade of her life, dying in 2002 at the age of one hundred eleven.

Posted by Jane Librizzi at 4:46 PM

Rouchswalwe, a thought I had after looking at "The Immigrants" is how pictures of slaves being transported to the Americas are almost always all-male groups as though women and children were not among the captives. Written - or drawn - out of history.