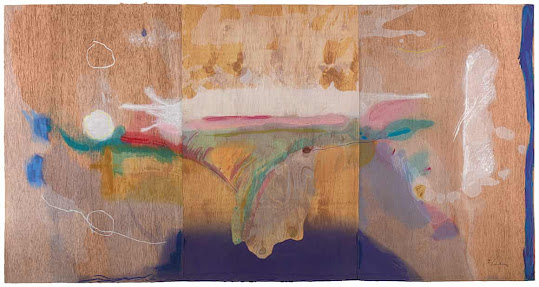 One of the most consistently beautiful abstract painters was Helen Frankenthaler. (1917-2011), a quality often held against her work by male artists. It's something we now admire in her work, seen here in Madame Butterfly. Spread across three sheets of paper, two blue-green curvilinear strokes suggest  butterfly wings.  Although Helen Frankenthaler has violated a cardinal rule of composition -  that symmetry can be boring -  she has resolved the problem with asymmetrical washes of delectable color.  Wabi sabi, a traditional Japanese aesthetic with its appreciation for the beauty of imperfection\is seen here as three against two. Frankenthaler bought  a Japanese screen on one of her many trips to Kyoto where she worked with master print Kenneth Tyler at Tyler Graphics Studio, beginning in the 1970s
Zen principles appealed to Frankenthaler and her contemporaries in the Abstract Expressionist movement of the 1950s as a path to individual expression; an influence  Frankenthaler strenuouslyy denied.  But here are undeniable echoes of Japanese calligraphy in her style and in the delicacy of her technique.
You can't see them from this reproduction but  Frankenthaler's Madame Butterfly is composed of more than one hundred different shades of color. Frankenthaler employed forty-six separate wood blocks for a symphony of tones and textures. Like her paintings, Frankenthaler's prints appear spontaneous although she planned her moves rigorously. As for the title, it alludes to Puccini's tragic opera about a geisha's love for an American naval officer; the artist usually named pictures after she finished them.  In Madame Butterfly we see both the  beauty  of Puccini's protagonist and  of a Japanese print.
A three-fold painting that originated in the early Middle Ages, the triptych was usually executed on wood panels, used as altarpieces in Christian churches. Frankenthaler's triptych is also large, measuring 41.75x 79.5 inches.
Image; Helen Frankenthaler - Madame Butterfly, 2000, woodblock print on paper,  Frankenthaler Foundation, NYC.
Posted by Jane Librizzi at 2:18 PM

Tania, the colors are beautiful.

Absolutely fascinating! And the Zen link is intriguing. Thank you for this, dear Jane!

Rouchswalwe, it is also interesting that Frankenthaler achieved a similar effect with wood block printing as she did with paint.