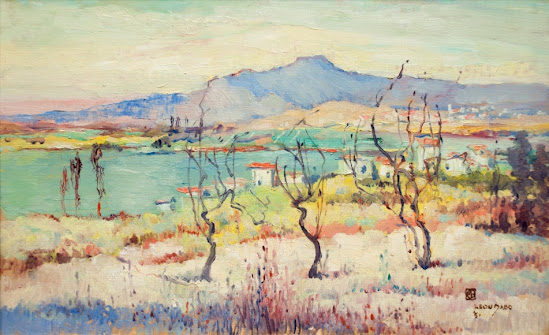 For Paul Cezanne Mont Sainte-Victoire was a magic mountain. Though not one of the tallest mountains around, it dominated the skyline over his hometown of Aix-en-Provence. Monet had water lilies; Cezanne had his mountain. Garlanded in centuries of folklore, Vincent van Gogh imagined the artist reading Virgil on its slopes.
Cezanne even bought an acre of Mont Sainte-Victoire in 1901 and the next year he built himself a studio there to have ready access when the spirit moved him to painit.
Landscape painters following in the footsteps of the Symbolists knew what a potent medium color could be for evoking emotion.
Leon Dabo (1864-1960) had a career that spanned continents, from his native France to the Unite States and back again, and throughout his long life he tried different styles, from Japonisme and tonalism to a late-blooming romanticism. His candy-colored vision of the Provencal landscape makes clear the artist's fertile imagination
Image:Leon Dabo - Etang-de-Barre Near Mont Sainte-Victoire, 1951, oil on canvas, Sullivan Goss Gallery, Santa Barbara.
Posted by Jane Librizzi at 2:15 PM

Thank for your posting.

Glad you enjoyed this.