Pablo Picasso: Boisgeloup In The Rain 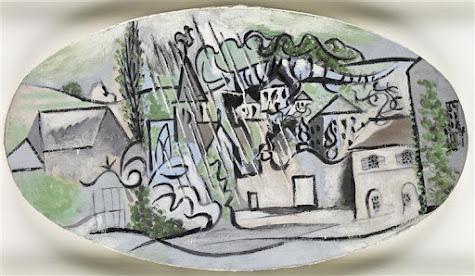 Paul Verlaine  described rain as "long sobs of Autumn's violins."
Admittedly, this painting by Picasso shows us spring rain but I think the epigraph fits.

Boisgeloup is an old stronghold dating from the Middle Ages. The town is located in the French region of Haute-Normandie. It became the home of Pablo Picasso in 1930. He Made a studio where he built sculptures in plaster, iron, and bronze. On the property there was a large outbuilding where he installed a press for engraving. He lived there for six years with his mistress Marie Therese Walter while his wife Olga stayed in Paris.  There is a small museum L'Atelier du sculpteur that displays his works.

I didn’t remember that residence.
Soon an exhibition in Brussels also: "Picasso and abstraction".

Tania, I had never seen an oval shaped Picasso painting before I saw this.

Picasso was an insensitive chap, wasn't he? Did his wife take him back?

Olga eventually divorced Picasso but he behaved very badly in the process.