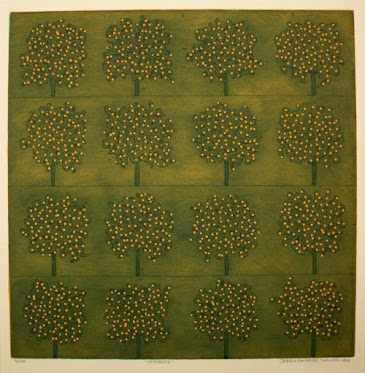 "I peeled my orange
That was bright against
The gray of December
That, from some distance,
Someone might have thought
I was making a fire in my hands."
-"Oranges" by Gary Soto

The most popular fruit in the world is the orange.  Its association with winter holidays makes perfect sense, a fruit that looks like the sun is fit  for purpose in the darkest time of year.

When Charles VIII invaded the Italian peninsula at the end of the fifteenth century he was smitten by a love for oranges. The orange trees were shipped in their root balls; on arrival the French gardeners bathed the roots in milk and honey. When Charles returned home to his chateau at Amboise he built France's first orangerie.  His wife, Anne of Bretagne, not to be outdone, built an orangerie for herself at Blois.

Henry II built one for his wife Catherine de Medici in 1533 and one for his mistress Diane de Poitiers.

This competitive one-upmanship continued for centuries; each successive monarch felt the need to create a bigger, more elaborate hothouse for their precious citrus fruit.

Known as the Sun King, Louis XIV could just as well have been called the Orange King. He commanded a twelve hundred foot orangerie in the shape of a half moon to be built as a setting for masked balls and garden parties. His gardeners invented an ingenious method to make the trees  bloom year-round. This was also when the French began to pour hot orange juice over roasted chestnuts. C'est si bon!

The Musee de l'Orangerie was built in 1852 to shelter the orange trees from the Tuileries gardens. A typical orangerie, its glazed windows faced south to capture as much heat as possible. These hothouses evolved into the prototype for the modern greenhouse. At the turn of the century it was converted to a warehouse.  Claude Monet donated his panoramic water lily canvases to the nation; the paintings were installed in 1927 after the painter's death.

Posted by Jane Librizzi at 2:45 PM

I love oranges and I have a very strong memory of a paradisiacal orange grove in southern Greece, I don’t know where exactly. I also like this engraving. Thank you for the verses by Gary Soto. Have a good week, Jane.

Oranges and limes are my favorite fruits!